Nov 3, 2019 9:36 AM PHT
Rambo Talabong
Facebook Twitter Copy URL
Copied
President Rodrigo Duterte also calls on ASEAN countries not to choose sides between China and the United States, all while pursuing his 'independent foreign policy' which involves the Philippines' pivot to China 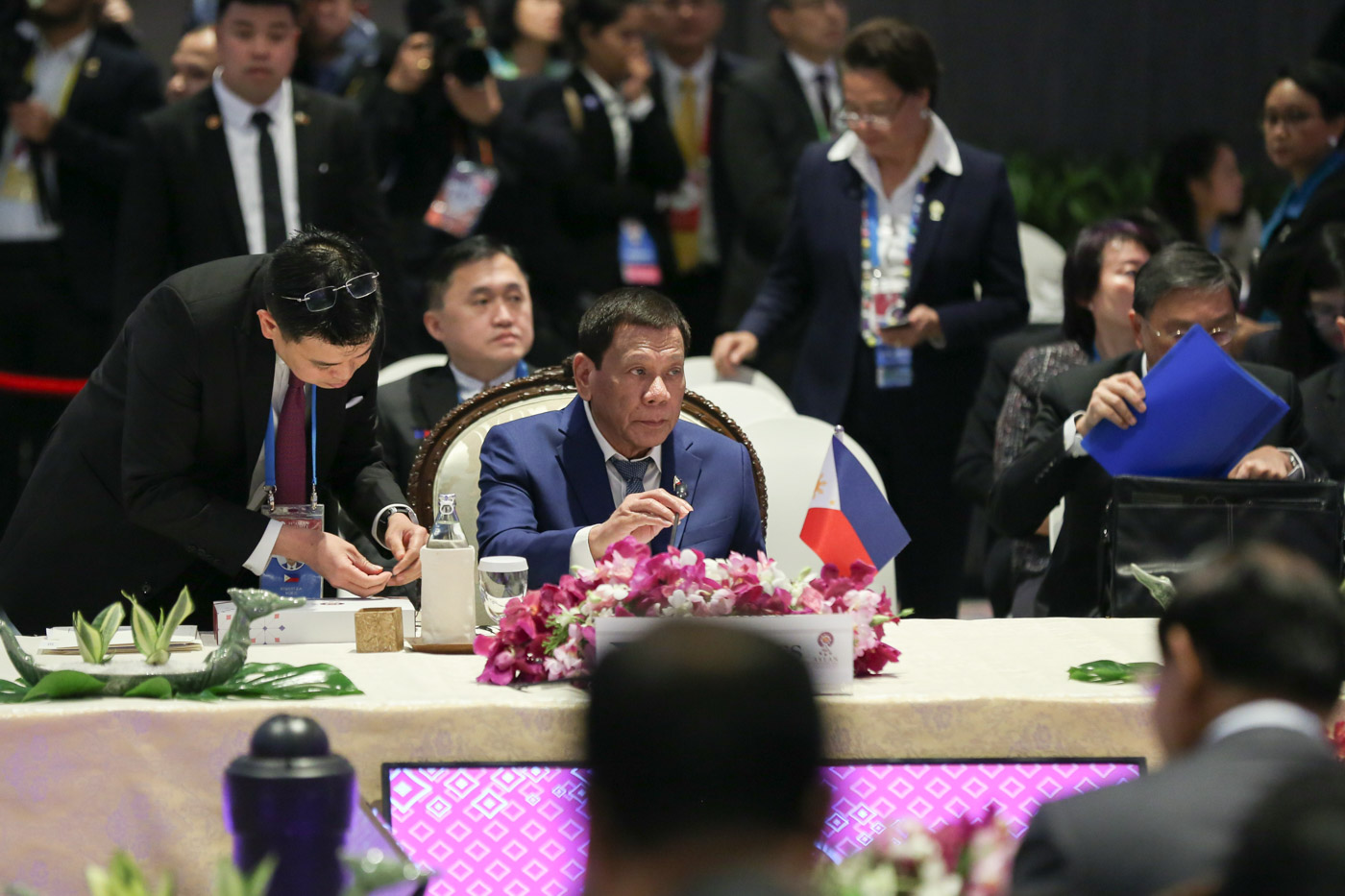 MANILA, Philippines – While calling for the enforcement of the United Nations Convention on the Law of the Sea (UNCLOS), President Rodrigo Duterte urged leaders of the Association of Southeast Asian Nations (ASEAN) on Saturday, November 2, to exercise “self-restraint” in effecting their claims.

“ASEAN must, therefore, remain united. We must lead the way in building trust and confidence among all stakeholders. And we must use all the influence that we have, individually and collectively, to persuade parties to exercise self-restraint and avoid actions that may further complicate the situation,” Duterte said in his speech.

Duterte was meeting with leaders of ASEAN in Nonthaburi in Thailand with ASEAN leaders for its 35th plenary. He will remain in the country up until Monday, November 4.

What does Duterte want? For Duterte, this means completing the South China Sea Code of Conduct (COC), which is a set of protocols that China and Southeast Asian countries with claims in the South China Sea will agree to follow to avoid any conflict in those waters.

“As ASEAN-China Country Coordinator, the Philippines will do its utmost part to conclude negotiations on a Code of Conduct as soon as possible,” Duterte said.

Duterte said that this also means refraining from taking sides between China and the United States, which he said may be dangerous as the two world giants already clash in trade. Duterte himself has led the Philippines in a pivot to China in the name of what he calls is his “independent foreign policy.”

Would it be enough? For retired Supreme Court Senior Associate Justice Antonio Carpio, the COC must not be used to “legitimize” China’s expansive claims in the South China Sea, which has already been declared illegal by a 2016 Hague court ruling.

As it is, China continues to occupy islands, both natural and man-made, in the South China Sea that ASEAN countries claim. China has also been regulating the traffic of sea vessels in the area, with the most recent encounter involving the harassment of a Filipino-crewed commercial vessel intending to pass through Scarborough Shoal as it sailed for China. – Rappler.com