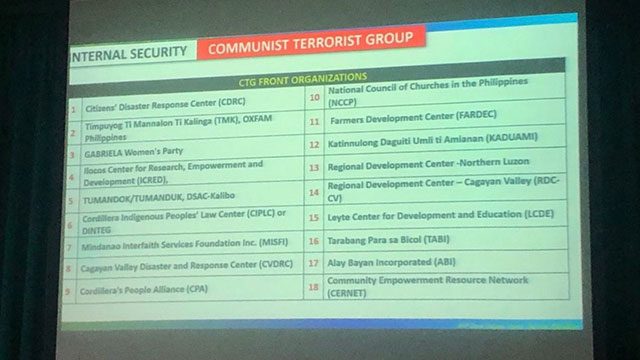 MANILA, Philippines – Gabriela Women’s Party – which won a seat in the 18th Congress – was red-tagged by both the Armed Forces of the Philippines (AFP) and the Department of National Defense (DND) in a hearing held inside the Batasang Pambansa.

Facing members of the House committee on national defense and security on Tuesday, November 5, AFP Deputy Chief of Staff for Intelligence Major General Reuben Basiao presented a list of 18 organizations that are alleged communist fronts.

Third on the list was Gabriela, which is currently represented in the House by Arlene Brosas after the party-list group secured more than 446,000 votes during the May 2019 elections.

The congresswoman, however, was not present during Basiao’s presentation. When she arrived at the conference hall, she requested to see the list once again.

(We’re being tagged as a communist terrorist group even here in Congress? What gives? What’s happening? Why are you doing this?)

Brosas lashed out against the AFP and the DND, asking if Gabriela’s inclusion in the list is a “prelude” to martial law.

(You’re familiar with what we do here. We were voted by the people. We were elected. We have a mandate. Why put the name of Gabriela Women’s Party in particular? What does this mean? Is this a prelude to martial law, with legal entities and legal organizations in particular now being targeted by the AFP?)

Defense Secretary Delfin Lorenzana then said that based on documents recovered by the military across the country, Gabriela is a “legal front” for the Communist Party of the Philippines.

But the DND chief said they are “not red-tagging” Gabriela.

“There is no prelude to martial law. We are not red-tagging Gabriela. We are just saying that they are [a] front of the communist movement. We based this conclusion from documents that we captured from our operations all over the country,” said Lorenzana.

“Palaging lumalabas ‘yung Gabriela tsaka ‘yung iba pang mga fronts nila. So what can you conclude there? I’m not saying you are communist. I’m saying that you are fronting, kayo ‘yung legal front nila,” he added.

(Gabriela’s name keeps on popping up along with other fronts. So what can you conclude there? I’m not saying you are a communist. I’m saying that you are fronting, that you are their legal front.)

In a statement released after the hearing, Brosas once again slammed the AFP and the DND for their “attempt to criminalize dissent.” (LISTEN: [PODCAST] Dapat bang gawing ilegal ang pagiging komunista?)

(We are not an armed group and our members are not armed either. Under the current Constitution and our laws, it is not a crime to organize and become activists. Gabriela Women’s Party strongly condemns this clear attempt to criminalize dissent and weaponize the law.)

Gabriela’s clash with the AFP and the DND came on the same day the Manila police arrested 3 members of progressive groups during a raid in Tondo past midnight.

On October 31, law enforcers in Bacolod City also arrested 56 persons affiliated with progressive and human rights groups during raids on their offices. – Rappler.com