How to shut down a mature adult who’s behaving badly? ‘Ok boomer’

Dismissing Teddyboy Locsin. “Ok boomer” has been popping up everywhere in the last two days on social media, and especially on Locsin’s twitter feed. 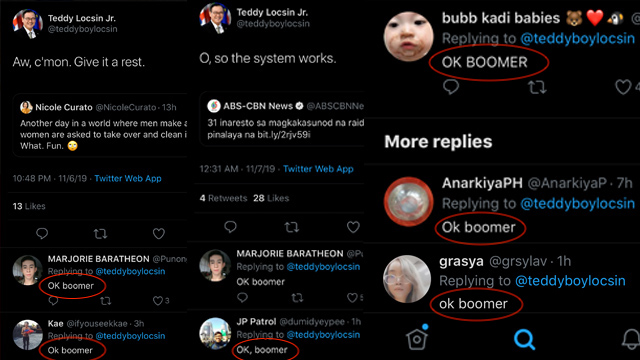 It’s now the hippest Gen YZ put-down for the out of touch and close-minded adult over 50.

Ouch! If you’re a Baby Boomer – born around 1946-1964 (like Locsin) – you might get a little defensive, even offended. It’s an unfair slam against an entire generation based on the misbehavior of a few.

What it means: But going beyond our age sensitivities, it’s the voice of the young telling us to “grow up.” They want maturity and wisdom from us, and all they get is crass, juvenile, or downright stupid behavior.

Form becomes substance: It’s a quick, elegant shutdown – the Millennials and Gen Z do have a flair for the economy of words. It’s the perfect put-down for the old fogies of the New Zealand Parliament and some members of the Philippine Cabinet with the EQ of a 6-year-old.

Mistake or masterstroke? Everyone is talking about Vice President Leni Robredo’s decision to accept what has been described by her own party mates and spokesman as a “trap.”

Why did Leni say yes? Mara Cepeda tells us the story of the VP’s great conundrum – one that will have major implications for her career as a government official. Watch.

What’s wrong with clickbait? We are not just waging a war on fake news but on all forms of disinformation. Some headlines can be harmless, but often, they not only fail to contribute to our education – they’re a step-back for the reader because they confuse and obfuscate. Must-watch.

Job insecurity. Manolo Ebora’s voice wavered as he spoke after receiving an award for “exemplary courage.” His speech – as noted by Rappler reporter JC Gotinga – was “more defensive than valedictory.” He had just finished a contract when he came home from that trip to China and is not sure now whether his employer would hire him again after what happened.

iPhone 11 unboxing. For those of you dealing with gadget envy now that the new iPhones are available in the Philippines, here’s Rappler’s technology editor Gelo Gonzales with an unboxing video of the iPhone 11, 11 Pro, and 11 Pro Max. Don’t fret, while the souped-up Pro Max may break your bank account, the iPhone 11 is priced at the “budget” range.

Crispy sisig, anyone? Crunchy, savory, pungent and quintessentially Pinoy. Chef Ernz Owera, the executive chef of Manam walks us through the one-two-three of making the dish in an amazingly short time (that does not include ingredients prep time.) Take note, some trade secrets remain secret. 😀

The kid who made history. Qualifying for the Tokyo Olympics was not half of it. When Carlos Yulo competed in the 2019 World Artistic Gymnastics Championships in Stuttgart, Germany, his gold-winning performance made it possible for the country’s national anthem to be played in a world-class gymnastics competition for the first time. Let Carlos tell you about his journey.