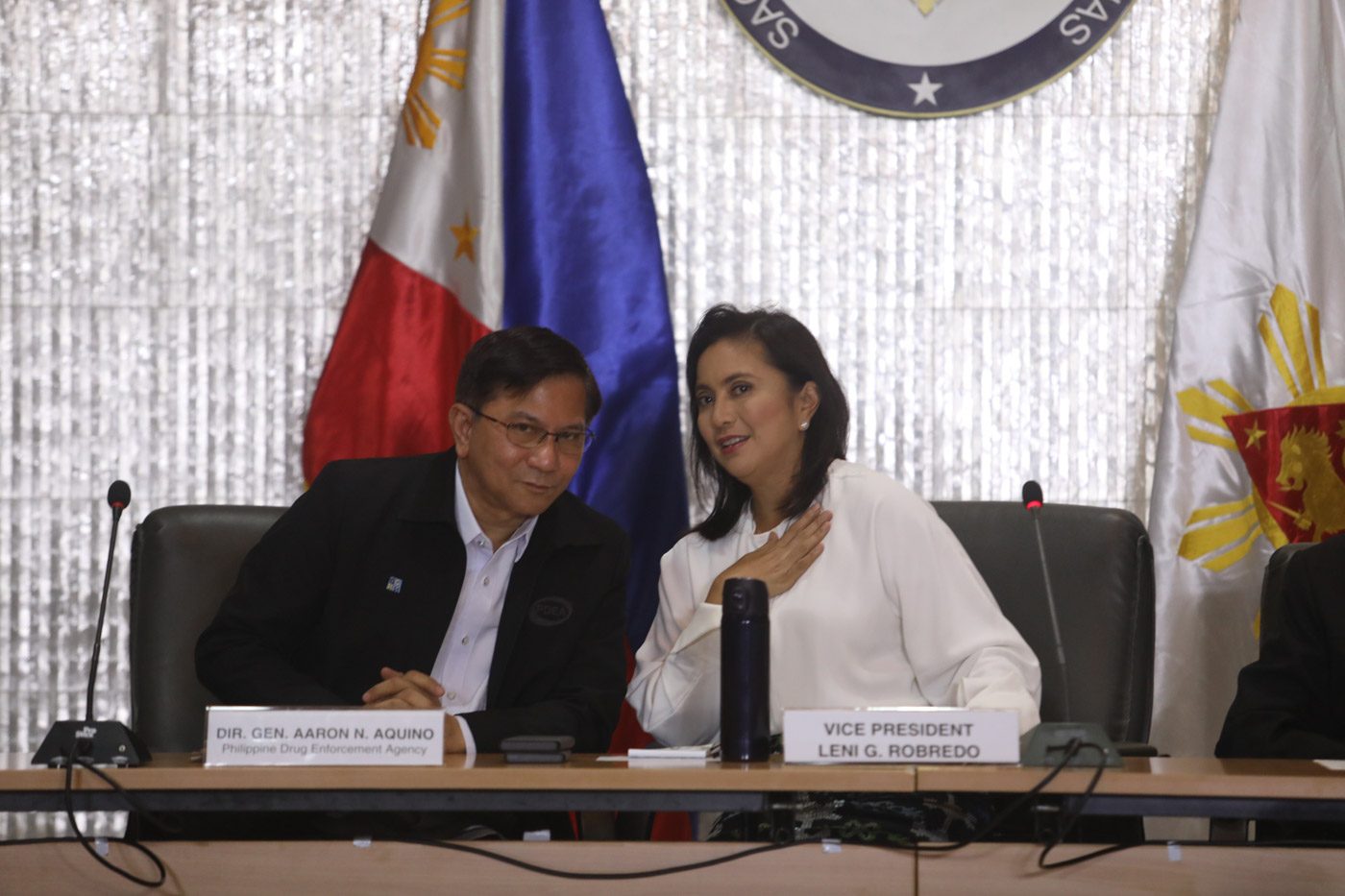 Facebook Twitter Copy URL
Copied
The Vice President has accepted the President's dare to go in and fix what she thinks is wrong with the drug war. Now, the anti-drug chief wants her to check out the frontlines and say exactly what needs fixing.

MANILA, Philippines – They’re in it together now, and they both have to make it work.

Philippine Drug Enforcement Agency (PDEA) Director General Aaron Aquino had his doubts about whether Vice President Leni Robredo would do well overseeing the government’s campaign against illegal drugs. But on Friday, November 8, he and the country’s second highest official sat side by side in their first Inter-Agency Committee on Anti-Illegal Drugs (ICAD) meeting as co-chairs.

(The meeting went okay. In fact, the Vice President somehow came to understand many things, and hopefully in the coming meetings for ICAD, she would learn more especially on the law enforcement side.)

“Kasi sabi ko nga, it will be bound for failure kasi nga in terms of experience and dealing with law enforcers, parang walang ganoon ang ating Vice President,” Aquino added, Robredo sitting right next to him.

(Because as I have said, it will be bound for failure because in terms of experience in dealing with law enforcers, the Vice President does not appear to have that.)

When President Rodrigo Duterte, as a dare, offered Robredo the post as ICAD co-chair with Aquino, the former police general said the former pro-bono lawyer was bound to fail if she accepted the job.

She did accept it on Wednesday, November 6, and Aquino must now work with her.

Robredo has long criticized the Duterte administration’s war on drugs for what she called “senseless deaths” of thousands of people, many of them poor. The campaign has, in fact, gained notoriety as a war against the poor, she said as she opened Friday’s meeting at her office in Quezon City.

Robredo went on about reassessing the anti-drug campaign, commending its merits but, again, zeroing in on her issue – the killings, insisting they must stop, and that the rule of law should be observed.

They were in Robredo’s office, the Executive House, and it was Robredo’s moment. Aquino never countered any of the Vice President’s points, at least not head-on, and not when reporters were present.

But as Robredo was about to conclude the media briefing after the meeting, when Aquino was answering one last question before giving the floor back to the VP, he turned to her with a request that became a challenge.

“So maybe, Ma’am, I could ask you to join us in one of the operations. I will also be there together with you. Para from the planning stage until such time that, during the conduct of operations and after the operations, at least ma-feel mo, Ma’am, kung ano talaga, papaano ginagawa ng mga law enforcers natin ang pag-conduct ng operations,” Aquino told Robredo in front of the cameras.

(So maybe, Ma’am, I could ask you to join us in one of the operations. I will also be there together with you. So that from the planning stage until such time that, during the conduct of operations and after the operations, at least you would feel, Ma’am, just how our law enforcers actually conduct operations.)

That way, Aquino said, if there were indeed errors, lapses, or irregularities in how law enforcers did their jobs, then she would see them herself. She would be acquainted with the realities of running the anti-drug campaign on the ground, instead of “just reading or hearing about it.”

“And, well, puwedeng challenge ko sa inyo ‘yan, Ma’am,” Aquino added. (And, well, you can consider that as my challenge to you, Ma’am.)

“Maraming salamat, General. Gustong-gusto ko ‘yan,” Robredo replied. (Thank you very much, General. I would really like that.)

“Before we started with the briefing, I assured the Director General not to worry about me,” she added.

She had said something was wrong with the anti-drug campaign, so the President dared her to get in there and fix it, and she did. Now, the director general has challenged her to check out the frontlines – and point out exactly what needed fixing.

“It is an opportunity to really amplify what I’ve been asking for, for quite a long time, and I am very grateful that, again, despite the circumstances, despite the differences, everyone pledged their full support,” Robredo said, afterwards standing up and shaking hands with Aquino. – Rappler.com