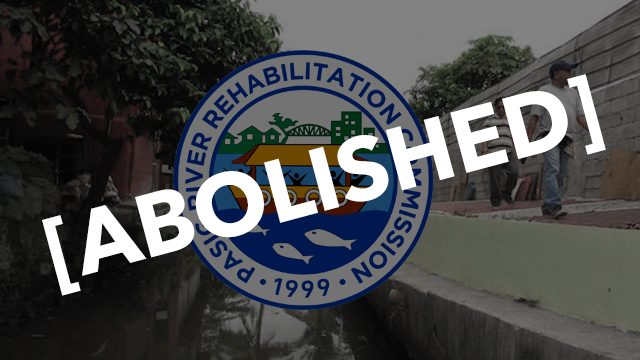 MANILA, Philippines – President Rodrigo Duterte abolished the Pasig River Rehabilitation Commission (PRRC) days after he claimed there was no longer any need for it, saying the famous river was already “clean.“

Duterte made the remark official when he issued Executive Order 93 last November 8. In a copy of the order given to media on Wednesday night, November 13, Duterte ordered the “disestablishment” of the PPRC established during the administration of former President Jospeh “Erap” Estrada.

The 20-year-old commission was tasked to ensure the rehabilitation of Pasig River to its “historically pristine condition conducive to transport, recreation, and tourism.”

Following EO 93, the following agencies will instead handle tasks and powers which were delegated to the PRRC:

EO 93 orders the Department of Budget and Management, along with the DENR and MMDA to oversee “winding up” operations of the PRRC which include the transfer of its functions to concerned agencies listed above.

Prior to the President’s decision to abolish the PRRC, Duterte fired PRRC executive director Jose Goitia for allegedly spreading word that he would soon be appointed customs collector. Goitia denied this.

Last May, the Commission on Audit (COA) found that the PRRC reported low accomplishment rates in 2018 despite using up 96% of its budget.

Earlier in 2018, the PRRC was also recognized for successful efforts to bring Pasig River back to life. The commission accepted the first Asia RiverPrize Award, handed by the International River Foundation.

Meanwhile, in a statement Thursday, the PRRC said it “respects the decision of the Palace on the disestablishment of the Commission.”  – Rappler.com