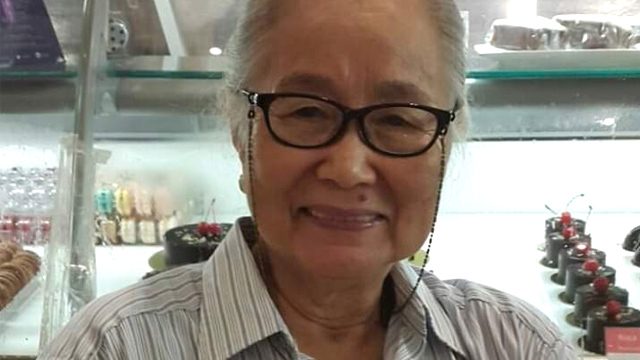 Facebook Twitter Copy URL
Copied
'A gentle, loving, kind, caring, and selfless human being Mrs Elizabeth was. She will be dearly missed,' says Malacañang in a statement

MANILA, Philippines – Malacañang mourns the passing of Elizabeth Yu Gokongwei, the Gokongwei family matriarch who died on Saturday, November 16—just a week after the passing of her husband, the late tycoon John Gokongwei Jr.

“The Palace is saddened by the passing of Mrs. Elizabeth Gokongwei yesterday, November 16, just one week after the death of her husband, John,” Presidential Spokesman Salvador Panelo said in a statement on Sunday, November 17.

Malacañang recognized Elizabeth Gokongwei’s philanthropy as a member of the Board of Trustees of the Gokongwei Brothers Foundation, which has spent millions to promote science and education in the Philippines.

The Gokongweis’ son, Lance, described his mother as the “the heart and soul of the Gokongwei family.” Robina, the eldest daughter, remembered her for how she thinks about everyone else in the family first before herself. To her late husband, Elizabeth stood as his “ally in happiness.”

“A gentle, loving, kind, caring and selfless human being Mrs Elizabeth was. She will be dearly missed,” Malacañang added. – Rambo Talabong/Rappler.com