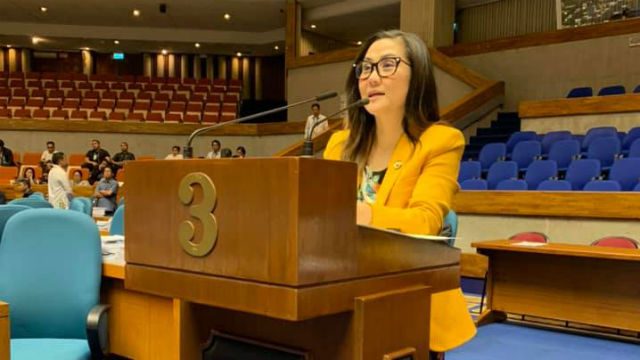 Facebook Twitter Copy URL
Copied
'We owe our children an environment that is free from all forms of violence,' says Bagong Henerasyon Representative Bernadette Herrera

MANILA, Philippines – Bagong Henerasyon Representative Bernadette Herrera said the practice of child marriage in the Philippines is a “fundamental human rights violation” that must be stopped.

“As attested by the UNCRC (United Nations Convention on the Rights of the Child) and various other international human rights conventions, child marriage is a fundamental human rights violation which has negative impacts on health and development of children,” Herrera said in a privilege speech on Monday, November 18.

The congresswoman co-authored House Bill (HB) No. 1486 together with Albay 1st District Representative Edcel Lagman to put an end to child marriage cases, which remain prevalent in Muslim and indigenous peoples communities. (READ: Too young to marry)

If passed into law, the bill would declare as “public crimes” the facilitation and solemnization of child marriages. Parents who marry off minors may also lose custody of their children. (READ: Congresswomen push bill vs child marriage: ‘We owe it to young girls’)

Herrera argued that early and forced marriages rob young girls and boys of their childhood and make them vulnerable to abuse. (WATCH: ‘My 14-year-old daughter married a stranger’)

“It denies them of their childhood, disrupts their education, and limits their opportunities. Married girls or child brides have increased risk of violence and abuse as well as life-threatening consequences on health,” said Herrera.

The Family Code prohibits minors from getting married in the Philippines. But Presidential Decree No. 1083, or the Code of Muslim Personal Laws, allows Filipino Muslim males the right to marry at the age of 15. Muslim females are allowed to marry as young as 12, provided they have begun menstruating and there is permission from their male guardian or wali.

The United Nations Children’s Fund puts at 650 million the number of women and girls alive today who were wed before their 18th birthday. In 2013, a Philippine Statistics Authority survey showed that 12.2% of all registered marriages in the country involved teenage brides aged 15 to 19.

“That means that in one year alone, 53,997 marriages had teenage brides,” said Herrera.

The congresswoman said she is consulting with stakeholders, including cultural and religious leaders, on how child marriages should be addressed.

“We owe this to our children. We owe our children an environment that is free from all forms of violence,” she added.

Aside from HB No. 1486, another anti-child marriage bill was filed by Quezon City 5th District Representative Alfred Vargas. The committee on welfare of children, however, has yet to deliberate on the measures. – Rappler.com