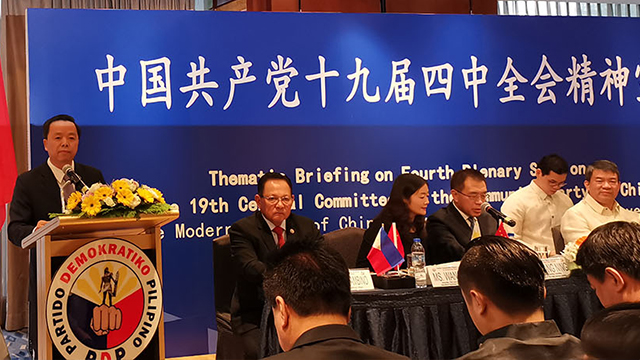 MANILA, Philippines – New Chinese Ambassador to the Philippines Huang Xilian stressed the importance of “sharing experiences of governance” between the ruling political parties of China and the Philippines, the Chinese embassy said in a statement on Saturday, December 7.

The Chinese embassy said that Huang made the statement in a speech during a thematic briefing of the Communist Party of China (CPC) at the Shangri-La Hotel in Makati on Friday, December 6, which was also attended by leaders of the ruling PDP-Laban.

“He stressed the importance of sharing experiences of governance so as to serve the people better,” it added.

During the Friday event, Huang also said that he would work on enhancing “mutual trust and understanding” between China and the Philippines, especially as the two countries mark their 45th year of diplomatic relations next year.

“Ambassador Huang also mentioned that the year 2020 marks the 45th anniversary of China-Philippines diplomatic relations. The ambassador said he is ready to make all efforts to work together and further promote high-level exchanges, facilitate practical cooperation and enhance mutual trust and understanding between the two countries,” the Chinese embassy said.

Huang arrived in Manila in early December to assume the post last held by Ambassador  Zhao Jianhua, who was ambassador to the Philippines for 5 years. (READ: Meet Huang Xilian, China’s new ambassador to Philippines)

Cooperation between PDP-Laban and CPC is being fortified amid concerns over China’s growing influence over the Philippines under Duterte. – Rappler.com