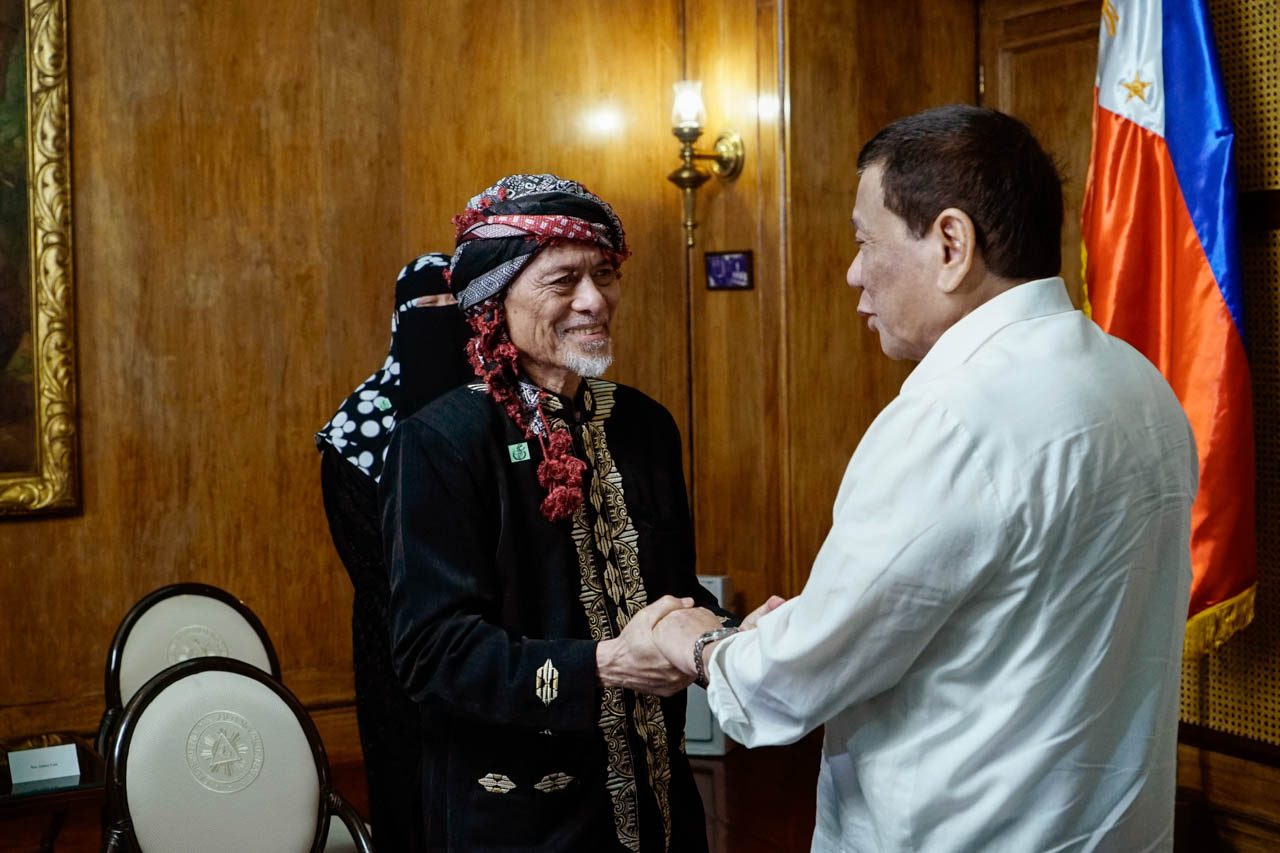 Facebook Twitter Copy URL
Copied
The government and Misuari's Moro National Liberation Front agree to implement remaining items from the 1996 Final Peace Agreement, after the former rebel leader complained of being left out of the Bangsamoro peace process

Duterte and Misuari met in Davao City on Friday, December 13, along with other government officials and a panel from the MNLF, to convene the newly-established Government-MNLF Peace Coordinating Committee.

During the meeting, the two sides agreed to implement the remaining commitments contained in the Tripartite Review Process of the 1996 Final Peace Agreement between the government and the MNLF.

Those commitments are the establishment of the Bangsamoro Development Assistance Fund, and the creation of the Tripartite Implementation Monitoring Committee.

Duterte and Misuari also agreed to continue pushing for a federal form of government.

Duterte appointed Misuari as representative to the OIC “in order to accelerate the implementation of the peace agreements and to develop further the support of the Islamic countries,” the OPAPP said.

The OIC is “the collective voice of the Muslim world,” the group’s website states. It has 57 member states in 4 continents. The organization works “to safeguard and protect the interests of the Muslim world in the spirit of promoting international peace and harmony among various people of the world.”

The MNLF is a non-state observer in the OIC. The Philippines has been seeking observer status in the organization since 2003, but the MNLF opposed it then, claiming to be the legitimate representative of the Bangsamoro people.

Misuari was governor the Autonomous Region in Muslim Mindanao (ARMM) from 1996 to 2001. The ARMM, established in 1989, was the settlement between the government and the MNLF, which opted for autonomy after initially fighting for secession in the 1970s.

In 1996, the government and the MNLF signed a “Final Peace Agreement” in Jakarta, Indonesia, on the full implementation of the the 1976 Tripoli Agreement that paved the way for the ARMM.

However, the ARMM failed to quell unrest and violence in Mindanao, especially because splinter groups from the MNLF kept fighting for independence.

Although the BARMM’s transitional government includes a faction of the MNLF, Misuari insisted on reviving his claim that the government honor past commitments to his group.

In August, after a series of meetings with Misuari, Duterte ordered the creation of a “coordinating committee” with the MNLF to tackle pending commitments to the MNLF, and to help secure the group’s bailiwick, Sulu province, which is also the turf of the Abu Sayyaf bandit group.

In September 2013, Misuari’s faction of the MNLF laid siege to Zamboanga City in a push to establish an independent Bangsamoro state. At least 6 people were killed and 24 others wounded in the 20-day battle with government forces. – Rappler.com