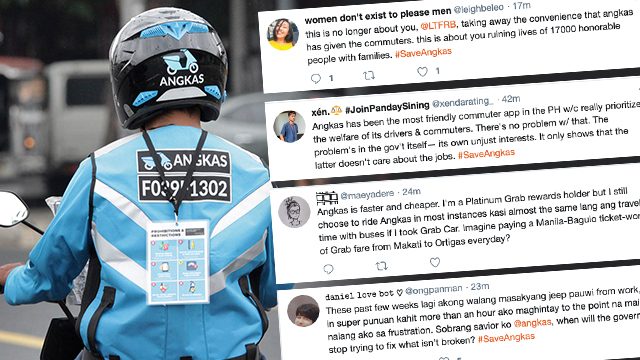 The hashtag was in response to the possibility of 17,000 bikers for the Angkas motorcycle taxi service losing their jobs.

In a now-viral statement earlier Saturday, Angkas chief transport advocate George Royeca pointed out how users were finding it difficult to book rides in the last few weeks. He added that while Angkas would have liked to increase the number of their bikers, the Land Transportation Franchising and Regulatory Board (LTFRB) did not allow Angkas to do so.

Filipinos online expressed anger and disappointment towards the government for this decision, as well as sympathy and praise for Angkas and its bikers, who were deemed by some as kind, helpful, and polite.

Below are some netizens’ reactions:

How do you feel about the TWG’s decision? What is your commuting experience like, especially during the holidays? Let us know your thoughts in the comments section! – Rappler.com