Santos, a veteran intelligence officer, is currently the commander of the AFP Eastern Mindanao Command (Eastmincom) headquartered in Panacan, Davao City. He will replace General Noel Clement, who will retire on Sunday, January 5, after serving just over 3 months as military chief.

Duterte will lead a change-of-command ceremony at Camp Aguinaldo in Quezon City on Saturday, January 4, to officially install Santos as military chief. 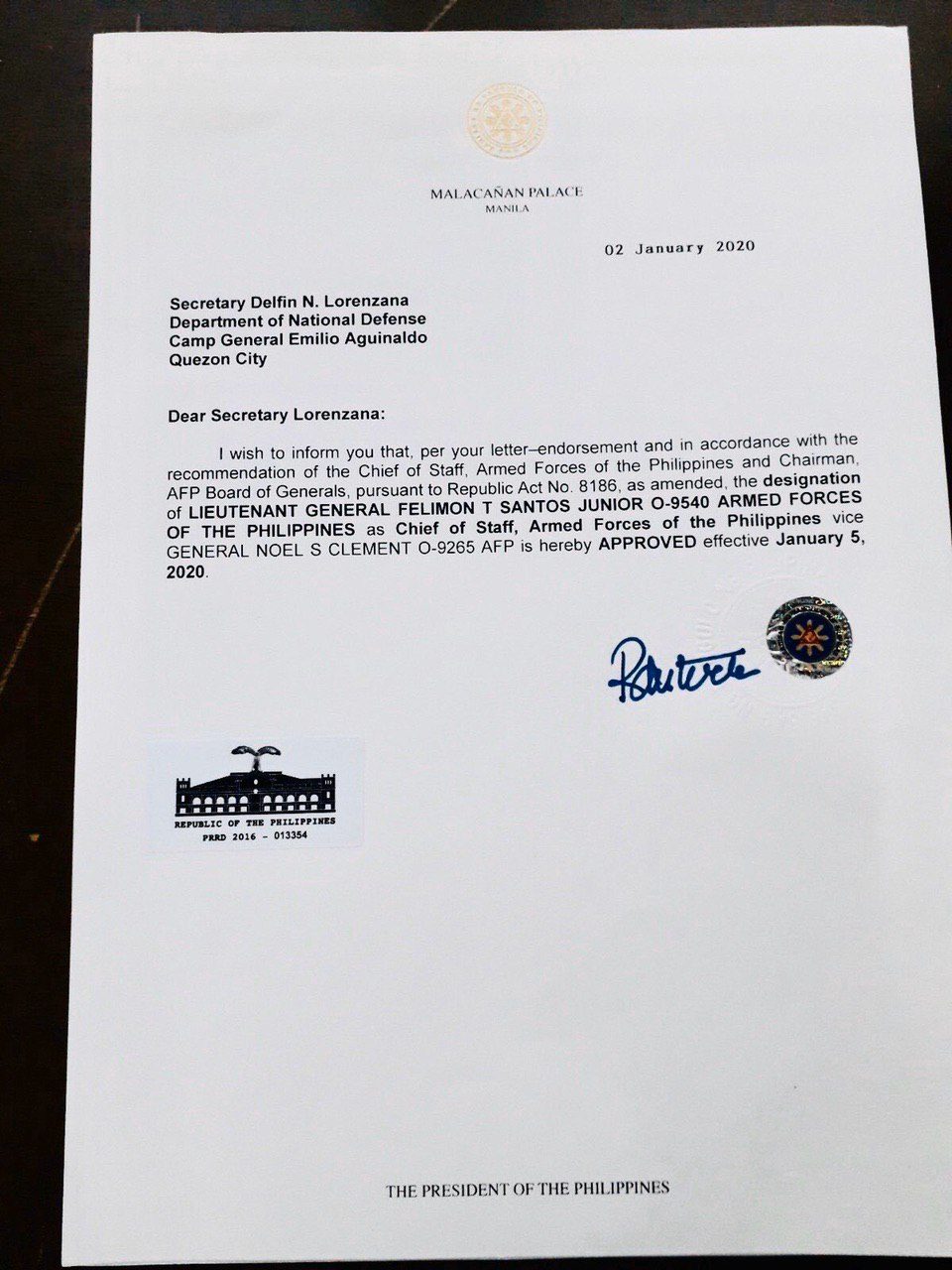 In a message to reporters, Santos thanked Duterte for his appointment and said the military under his command would “continue to support all the priority programs regarding peace and security.”

He would lead the AFP in ending the communist insurgency, neutralizing terror groups that have pledged allegiance to the Islamic State (ISIS) terror network, and would support the police and anti-drug agencies in the campaign against illegal narcotics, Santos added.

As Eastmincom chief since January 2019, Santos is in charge of battling communist rebels in the Davao, Soccsksargen, and Caraga regions.

Before that, Santos was the commander of the Philippine Army’s 7th Infantry Division in Central Luzon based in Fort Ramon Magsaysay in Nueva Ecija from October 2017.

The Army once called Santos an “expert intelligence officer,” having been the AFP Deputy Chief of Staff for Intelligence, J2, from November 2016 to October 2017.

A member of the Philippine Military Academy “Sinagtala” class of 1986, Santos is also a Scout Ranger and a Field Artillery officer. He has a Master’s degree in management.

Santos is a “seasoned combat officer,” according to the Army, and he was awarded numerous service award medals and commendations.

He began his career as an officer in the Army’s 39th Infantry Battalion in Mindanao.

Duterte built his reputation as a formidable politician when he became mayor of Davao City after the fall of the Marcos dictatorship in 1986. The city was then caught up in violence from communist rebels, whom he managed to drive out of the metropolis.

As President, Duterte appointed military and police officers with Davao City connections to top posts, with a few exceptions.

As military chief, Santos’ top orders will be to stamp out the communist insurgency, which Duterte wants done by the end of his term in 2022 – unless planned peace negotiations with the Communist Party of the Philippines lead to a ceasefire beyond the holidays. Besides this, the military must also fend off intruders in the West Philippine Sea (South China Sea), and terrorists based in parts of Mindanao who pose a threat to the entire country.

Santos will turn 56, the mandatory age of retirement for military officers, on August 3, 2020.  – with a report from Pia Ranada/Rappler.com