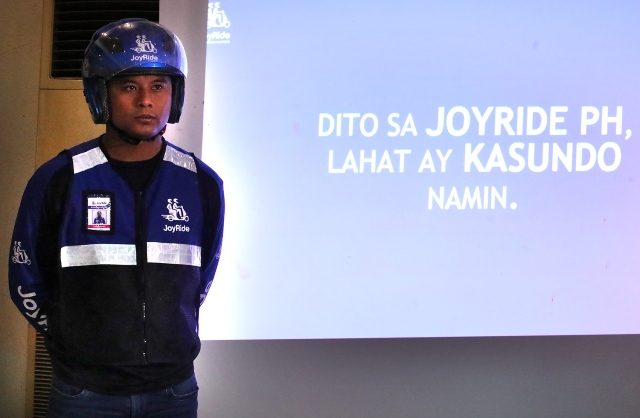 MANILA, Philippines – New motorcycle firm JoyRide is distancing itself from the backing of politicians, but admitted to have asked for the endorsement of Senator Aquilino Pimentel III for its application for the pilot run.

In its first-ever media briefing on Thursday, January 2, JoyRide clarified claims on ownership and entry, as if it started on a wrong foot.

JoyRide chief business advisor Edwin Rodriguez, who currently sits as PDP-Laban Quezon City secretary-general, said that he did not ask for the help of the ruling party despite his affiliation.

“Hindi ako lumapit sa kanila para maimpluwensyahan o humingi ng tulong para makapasok ang JoyRide,” Rodriguez said. (I did not ask for their [PDP-Laban] to influence or to ask help for the entry of JoyRide in the industry.)

However, Quezon City Representative Anthony Peter Crisologo and Anakalusugan Party list Representative Mike Defensor had made public on a social media post their “recommendation” to the Department of Transportation to include JoyRide, among others, in the pilot run as early as November 2019.

While JoyRide maintaned they were not backed by politicians, its President Sherwin Yu admitted that the firm had asked Senator Aquilino Pimentel III to endorse their bid as they applied for the inclusion in the motorcycle ride-hailing pilot-run in September.

“But just the same we continued sending our intent to join the pilot implementation since September,“ he added.

Despite the senator’s endorsement, JoyRide Vice President for Corporate Communications Noli Eala said he doesn’t think it helped their application, as it was submitted to the previous technical working group. Eala disclosed that JoyRide’s owners are the ones who are “family friends” with Pimentel.

“The initial TWG that was handling this program. I dont think it really helped us dahil hindi naman umusad ang aming application (because it didn’t move forward) until much later. And nobody acted on that letter, based on that letter of Senator Pimentel,” Eala said.

JoyRide’s entry into the pilot-run was approved in December, under the new TWG headed by Land Transportation Franchising and Regulatory Board Member Antonio Gardiola Jr. (READ: Metro commuting in 2019: The shortcomings of the motorcycle taxi pilot run)

Not owned by politicians

Eala categorically denied that the motorcycle firm is owned by politicians

“I just want to put it very, very clearly. Wala pong kahit na sino na tiga-gobyerno na miyembro ng JoyRide [officials]. (No one in the government is a member of JoyRide),” Eala told reporters in a mix of English and Filipino.

Rumors of JoyRide being owned by Senator Christopher “Bong” Go made rounds on social media in December, a claim that the senator himself denied.

Eala said that business owners and family friends Ralph Nubla Jr and Bea Chua own JoyRide, as they simply “decided to venture into another industry.” Nubla is a director at the Philippine Bank of Communication and has businesses in real estate.

“They started last year where we are seeing the motioning of the industry in delivery services. They wanted to do more at the industry, hoping that it will not only be profitable but [for it to] make a difference in the industry,” Eala said.

Prior to becoming “JoyRide”, the firm first dabbled in logistics under the name “Happy Move”, which was registered at the Securities and Exchange Commission as We Move Things Philippines Inc.

JoyRide, along with Move It, are now challenging pioneer firm Angkas during the extended motorcycle taxi pilot implementation, as stakeholders await for the passage of a law that would legalize its operations. (READ: Why Angkas is illegal) – Rappler.com