Mar 27, 2013 10:36 PM PHT
Facebook Twitter Copy URL
Copied
The Jonas Burgos case is the first of its kind in recent history to reach this far - making the police and the military 'responsible and accountable' for his disappearance 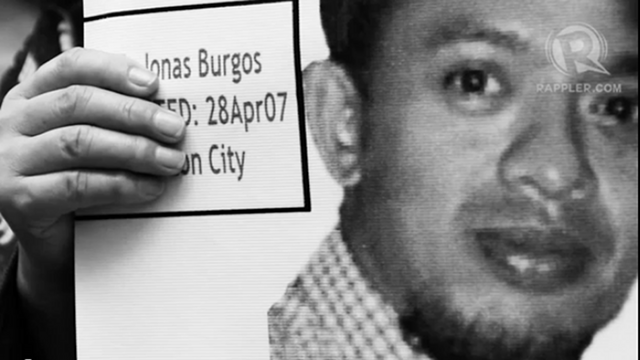 MANILA, Philippines – The ruling of the Court of Appeals holding an army officer responsible for the 2007 enforced disappearance of activist Jonas Burgos is a “victory,” his lawyer said, but they are hoping for a bigger “breakthrough.”

Lawyer Boyet Fernandez said on Wednesday, March 27 that the CA ruling – which held former Army Maj Harry Baliaga responsible and the military accountable for Burgos’s abduction – lifted the lid on Burgos’s case, but they plan to go again to the Supreme Court to make sure it does not end there.

The CA, in a decision dated March 18 but was made public only on Wednesday, March 27, said Baliaga was responsible for the enforced disappearance of Burgos. Baliaga belonged to the Army’s 56th infantry battalion based in Bulacan when Burgos – who was known as “Ka Ramon,”  an alleged member of the communist New People’s Army based in Bulacan – was seized.

Burgos – who is turning 43 on Friday, March 29 – was abducted by suspected members of the military in Hapag Kainan restaurant at Ever Gotesco mall in Quezon City 6 years ago — on April 28, 2007.

A son of the late press freedom icon Joe Burgos, Jonas studied agricutlure before going full time as an activist. He’s caught between a society’s respect for fundamental rights and its institutions’ belief that every rebel, in or out of the battlefield, is fair game.

No other case of enforced disappearance in recent history has come this close to identifying key players, producing documents, and establishing the motive for such crime.

But Fernandez said they do not want the SC to say that the case stops with the CA’s decision on their writ of amparo petition.

The ruling capped the CA’s 3-year inquiry into the case which raised questions on the limits of the military’s quest to end communist infiltration within their ranks and insurgency in the country. (Read: Why would the army abduct Jonas Burgos?)

Fernandez said the CA, for one, previously held another military officer – now retired Maj. Gen. Jovito Palparan – “responsible and accountable” for the alleged abduction of UP students Sherlyn Cadapan and Karen Empeño. While it established Palparan’s culpability, it did not compel the Armed Forces of the Philippines to  admit its hand – if any – in their disappearance.

“We want the military to own up to it (Burgos’s disappearance),” he said. He told Rappler they plan to ask the SC “not to close the doors” on the case.

Fernandez said their concern is that the SC may keep its hands off the case after the CA decision. The SC acted on Burgos’s case previously by first, asking the Commission on Human Rights (CHR) in 2010 to probe the incident and second, ordering the CA to conduct an inquiry into the findings of the CHR.

He said they want the SC to make sure the military tells the truth about the case.

After the writ of the amparo petition was filed in 2010, the military filed its return to the writ and denied its involvement in Burgos’s abduction. Fernandez asked the CA to hold the respondents in contempt of court for allegedly lying, but the CA dismissed their petition for insufficient evidence.

Fernandez said the army could just again do the same even with this CA ruling. He said the authorities can just again continue with its “cover-up” of the case.

Burgos’s family said the CA ruling served as a “big reminder” though about their ongoing search for him, adding they hoped the decision “would lead them” to Jonas “and to the  names of those involved so that justice may be served.”

The CA ruling – which was signed by CA Justice Rosalinda Asuncion-Vicente and concurred in by Justices Francisco Diamante and Remedios Salazar-Fernando – categorically stated that Burgos’s abduction is a case of enforced disappearance covered by the writ of amparo.

This statement is important because it paves the way for the Burgos family to fully exhaust the reliefs under the writ of amparo. The writ, which took effect in 2007, grants families of alleged victims of enforced disappearance temporary protection and allows them to visit camps with an inspection order. It also requires government agencies to release related documents.

Edita Burgos, Jonas’ mother, now hopes that the ruling would compel Baliaga to release documents that would specify the names of the officers who could also be responsible for Burgos’ disappearance.

“We pray that the recognition by the court that the abduction of my son Jonas as an enforced disappearance and thus covered by the rule of the Writ of Amparo would result in the proper and concerned authorities to make available to us, all the documents they have on Jonas, make accessible to us all the officers who had anything to do with the abduction, or who had knowledge of the abduction and grant us access to camps and safe houses that could give us leads to the whereabouts of Jonas,” Mrs. Burgos said.

The Burgos family has filed a separate criminal case of obstruction of justice against these officers and another criminal case of arbitrary detention against Baliaga, Lt. Col. Melquiades Feliciano and Col. Eduardo Año. (Año was promoted as chief of the Intelligence Service of the AFP in December 2012; he was the intelligence chief of the Army when Burgos was abducted.)

The criminal cases are still pending at the Department of Justice.

The CA distinguished accountability from responsibility.

It said that jurisprudence defines accountabiliity as “the measure of remedies that should be addressed to those who have exhibited involvement in the enforced disappearance without bringing the level of their complicity to the level of responsibility.”

The CA, by holding the PNP and AFP accountable, said the two institutions are required to conduct an exhaustive investigation on Burgos’ disappearance.

The court also ordered them to coordinate with the CHR in its own probe of the case. The CHR previously released its findings on the incident and held the AFP liable for Burgos’s abudction in 2011.

The military and the PNP have, according to the CHR, refused to cooperate in the  investigation. – Rappler.com