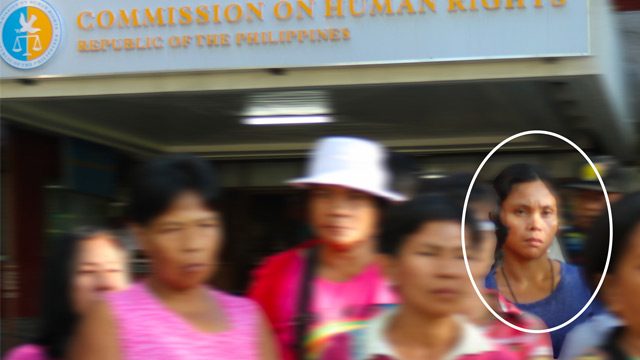 MANILA, Philippines – The Commission on Human Rights (CHR) on Monday, January 20, condemned the “brutal” killing of a local peasant leader in Northern Samar.

In a statement, the CHR said 35-year-old Jennifer Tonag is just one of the many victims who have “faced reprisals due to exposing state-perpetrated human rights violations and demanding for justice and accountability.”

“The CHR calls for justice for the death of Tonag and all the human rights defenders in the country and around the world who sacrificed their lives to create a better future for everyone, especially for the marginalized, vulnerable, and disadvantaged segments of our society,” CHR spokesperson Jacqueline de Guia said.

Unidentified men killed Tonag, organizer of the Northern Samar Small Farmers Association (NSSFA), while she was on her way home from a seminar sponsored by the Department of the Interior and Local Government last Friday, January 17.

She sustained two gunshot wounds, one on her hand and chest, and was declared dead on arrival at the Northern Samar Provincial Hospital.

Call for repeal of EO

The CHR “amplified the clamor” for the government to repeal Executive Order No. 70 which created a national task force that sought to address causes of armed conflict with communists at the local level.

Human rights groups have said that EO No. 70 only led to massive red-tagging as well as threats and harassment under the guise of a counterinsurgency program.

“The commission reiterates its call to the government that it must desist from all forms of violence and harassment against human rights defenders,” De Guia said.

“These attacks are in the context of increasing number of reported extrajudicial killings in rural areas alongside the intensified counterinsurgency program of the government,” she added.

More than 100 human rights defenders have been killed since July 2016, data from rights group Karapatan showed. Many of the killings were in provinces that have long had conflicts related to land, with victims mostly coming from the farming sector. (READ: Human rights defenders also killed under Duterte administration)

The killings exist alongside other incidents of legal harassment against activists by the Duterte administration. (READ: Duterte’s war on dissent)

“We strongly urge our legislators to prioritize the enactment and full implementation of a Human Rights Defenders Protection Bill that will give legal recognition and protection of the rights of defenders in the conduct of their work,” De Guia said. – Rappler.com