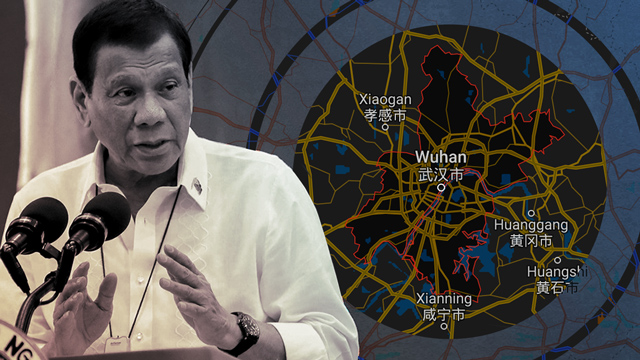 MANILA, Philippines – President Rodrigo Duterte has imposed a ban on travelers from Wuhan City and Hubei province, China, the epicenter of the 2019 novel coronavirus (nCoV) that has gripped the world with its spread.

Presidential Spokesperson Salvador Panelo made the statement on Friday, January 31, saying the ban will also cover other areas of China where the virus has spread.

“Upon the recommendation of DOH [Department of Health] Secretary Francisco Duque, the President has issued a travel ban to Chinese nationals coming from the Hubei province of China where the nCoV originated, as well as in other places in China where there is a spread of the disease,” Panelo said in a statement.

It is not yet clear until when the ban would remain in place. Panelo said the ban would last until “the threat is over, given that the safety of our countrymen is foremost in the President’s mind.”

Other measures taken. Duterte’s latest move tightens restrictions taken by the Philippine government to quell the spread of the virus.

The Civil Aeronautics Board (CAB) earlier suspended direct flights from Wuhan City, China, the epicenter of the virus. Meanwhile, the Bureau of Immigration (BI) announced on Tuesday, January 28, the temporary suspension of the visa upon arrival (VUA) mechanism for Chinese tourists and businessmen.

The Department of Foriegn Affiars (DFA) has also temporarily stopped issuing visas to travelers from Hubei province. Meanwhile, on Thursday night, January 30, the DFA called for the repatriation of Filipinos in China over fears of the virus spread.

The DFA said its first batch of repatriates of Filipinos from Wuhan and Hubei May arrive back in the country as early as next week.

The latest in the Philippines. Health officials on Thursday confirmed the first case of coronavirus in the country in a female patient who traveled to the Philippines from Wuhan.

The 38-year-old woman is currently being treated in a government hospital, where she was admitted on January 25, though was no longer showing symptoms.

Duque gave assurances the Bureau of Quarantine was checking the patient’s flight details to trace who she may have come into contact with. The patient traveled to Cebu and Dumaguete.

Malacañang said the first confirmed case in the country “raised serious concern” over the health and safety of Filipinos.

“The DOH assures us that every measure is being undertaken to contain the spread of the dreadful virus as well as monitoring and placing in quarantine those showing symptoms of having nCov,” Panelo said.

As of early morning Friday, January 31, the virus has killed 212 people and infected over 8,000 people worldwide. – Rappler.com