Coronavirus impact on tourism may be worse than Boracay closure 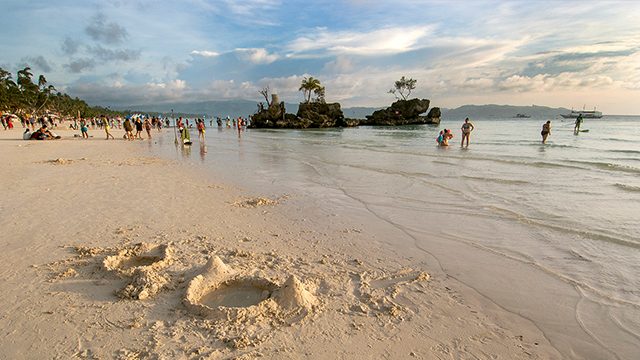 Facebook Twitter Copy URL
Copied
Almost 60% of island hopping and water sports activities, as well as majority of vendors, tattoo artists, and beach masseuses will be affected by the temporary ban

AKLAN, Philippines – The impact of the coronavirus outbreak on Boracay’s tourism industry could be worse than the Boracay closure.

Peter Tay, liaison officer to Boracay for the Chinese Embassy in the Philippines, expressed fears that travel restrictions could further hurt tourism businesseses and tourist spending.

“It is going [from] bad to worse. When the Boracay closure happened, you could look forward [to the] October 26 re-opening. Itong situation ngayon, hindi natin alam when it will end, (We don’t know when this current situation will end),” Tay said on a Radyo Todo Aklan interview on Monday, February 3.

On Sunday, February 2, President Rodrigo Duterte restricted the inbound travel of foreigners from China and its special administrative regions to the Philippines, and required Filipinos and those holding permanent resident visas to undergo a 14-day quarantine. (READ: China coronavirus death toll rises to 425 – gov’t)

The directive, however, didn’t mention how long the temporary ban would last.

Carriers including Philippine Airlines, Cebu Pacific, Xiamen Air, China Eastern Air, OK Air, and Air Asia have suspended or canceled flights to and from China, Macau, and Hong Kong. (READ: Traveling amid coronavirus outbreak? Here’s what you need to know)

Almost 60% of island hopping and water sports activities, as well as majority of vendors, tattoo artists, and beach masseuses will be affected by the temporary ban. Chinese restaurants owners have decided to close shop, while hotels across the island have recorded cancelations.

The island – which saw 434,175 Chinese tourists, or 50% of its 865,419 foreign visitors, last year – is usually packed with travelers during the peak season of January to May.

“We were caught by surprise, but we have to accept that this is actually happening. No hard feelings. I am more concerned [for] the livelihood  of the local workers affected by the situation,” Tay added.

As a precaution, Tay also encouraged hotel workers to visit hospitals or medical care facilities if they experience coughing and difficulty in breathing.

Meanwhile, acting Malay town mayor Frolibar Bautista said he will no longer declare a temporary ban on tourists from China and its special administrative regions in the area since President Duterte already issued a directive.

Boracay hasn’t come to complete standstill, however, as the island continues to accommodate Koreans, Taiwanese, and tourists from long-haul destinations.

In 2018, President Duterte ordered the closure of Boracay for 6 months for rehabilitation. – Rappler.com