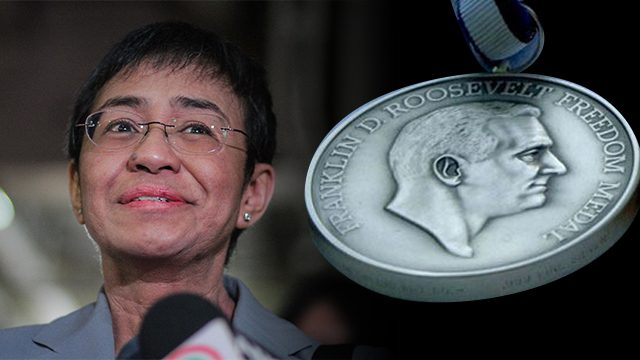 MANILA, Philippines – Rappler CEO Maria Ressa is among the 5 laureates of the 2020 Four Freedoms Awards, garnering the Freedom of Speech and Expression award.

The chairman of the Roosevelt Foundation and King’s Commissioner in the Province of Zeeland, Han Polman, announced the names of the 2020 Four Freedoms Awards laureates on Wednesday, February 5.

The awards seek to honor individuals and organizations whose achievements “demonstrated a commitment to the principles which President [Franklin] Roosevelt proclaimed in his historic speech to Congress on 6 January 1941.”

“If democracy is to survive and flourish,” Roosevelt said, “people everywhere in the world are entitled to 4 human rights: freedom of speech and expression, freedom of worship, freedom from want, and freedom from fear.”

Ressa will receive the Freedom of Speech and Expression award for “her continuing dedication to tell people what is happening in the world and her commitment to address human rights abuses, no matter how tough circumstances are or how much opposition she meets.”

Religions for Peace International will be honored with the Freedom of Worship award for its commitment toward promoting peace and buiding bridges between religious communities to increase mutual trust and lessen hostility in areas of conflict.

Dutch journalist and television presenter Sander de Kramer will receive the Freedom from Want award for working to establish the Sunday Foundation and help so-called “forgotten places” on Earth by setting up projects to alleviate a locale’s worst needs.

Meanwhile, Palermo, Sicily Mayor Leoluca Orlando will receive the Freedom from Fear award as he “has successfully and with great resolve and determination acted against the mafia, corruption, and the death penalty,” in addition to advocating for a more human approach toward the issue of migration in Italy and Europe.

Orlando also fought corruption in Palermo’s government and helped transform the city into “a vibrant and culturally interesting place to live and work.”

The 2020 Four Freedoms Awards ceremony will take place on April 14 in Middelburg, The Netherlands. – Rappler.com