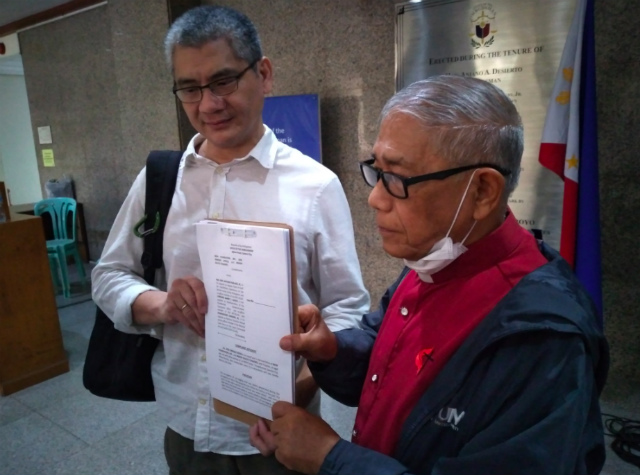 MANILA, Philippines – Policy research group Ibon Foundation on Monday, February 10, is seeking to hold accountable before the Office of the Ombudsman 3 key officials of the Duterte administration for their “persistent attacks” against and “red-tagging” of progressive groups in the Philippines.

The complaint was filed by Ibon executive director Sonny Africa and Board of Trustees chairperson Bishop Solito Toquero.

In a statement, Ibon said it is also asking the Ombudsman to “punish” the officials for their conduct that is “grossly disregardful of the public interest, unprofessional, unjust and insincere, politically biased, unresponsive to the public, distorting nationalism and patriotism, and undemocratic.”

The group said the 3 violated provisions of Republic Act No. 6713 or the Code of Conduct and Ethical Standards for Public Officials and Employees.

The complaint comes amid threats and accusations by government officials against Ibon, including being tagged as among those whose funding was allegedly being used by the Communist Party of the Philippines (CPP). It had also experienced cyberattacks against its website.

More recently, during an episode of One News’ The Chiefs, Badoy accused the group of being part of the CPP, instead of addressing Ibon’s concerns after it fact-checked the numbers cited in the Duterte Legacy campaign. (READ: Making sense of the ‘Duterte Legacy’ infographic)

Parlade, meanwhile, is a key figure in the government’s anti-communist movement. Before heading the Southern Luzon Command, Parlade was the Armed Forces of the Philippines’ deputy chief of staff for civil-military operations and was part of the National Task Force to End Local Communist Armed Conflict.

Together with other government officials, Parlade went on a “truth caravan” to Europe in February 2019 to present, among others, the Duterte administration’s operations to stop the communist rebellion.

Red-tagging, as defined by the Supreme Court, refers to the act of “labelling, branding, naming and accusing individuals and/or organizations of being left-leaning, subversives, communists, or terrorists (used as) a strategy…by State agents, particularly law enforcement agencies and the military, against those perceived to be ‘threats’ or ‘enemies of the State.'” (READ: Creating a Marcos? Reviving the anti-subversion law under Duterte)

Founded in 1978, Ibon is one of the foremost policy groups tackling socioeconomic issues in the Philippines and has been working closely with civil society to spread its research on important issues.

Ibon said its research also has “a reputation of being independent, evidence-based, and credible.”

“It is because of this reputation that its researches on social justice, real economic development, environmental sustainability and democracy, among many others, are widely used by various nongovernment and peoples organizations in pursuit of their own advocacy work,” it said.

In a previous statement, Ibon slammed the threats, calling red-tagging a way for the government to silence critical voices and opposition, and to hide the real situation of the country.

Harassment and vilification of progressive groups is widely regarded by critics as a key feature under the Duterte government. Human rights defenders have reported red-tagging, profiling, and surveillance by authorities in line with the administration’s counterinsurgency program.

The Commission on Human Rights earlier warned about the serious implications of red-tagging.

“Labeling groups before an objective judgment violates the constitutional guarantee of presumption of innocence and may have serious implications on the security and movement of individuals and groups involved,” it said.

According to rights group Karapatan, at least 2,370 human rights defenders have been charged by the government from 2016 to 2019 – the biggest number in more than a decade. (READ: Duterte’s war on dissent)

Karapatan said that the firearms recovered by authorities during the raid were “planted in the rooms.” – Rappler.com