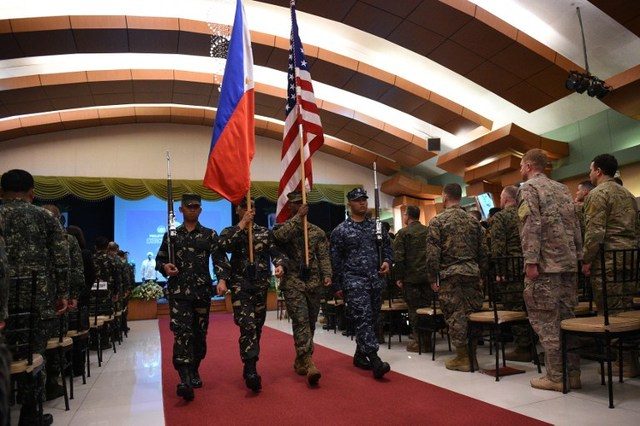 MANILA, Philippines – The Senate on Tuesday, February 11, split along political lines after the Philippines sent its notice of termination of the Visiting Forces Agreement (VFA) to the United States.

It was divided on whether or not the President had the power to unilaterally abrogate international agreements.

In the end, the pro-administration senators withdrew their votes on the Senate resolution approved Monday, February 10, urging Malacañang to first review the VFA.

This view raises a Constitutional question which the Supreme Court may need to answer.

“The thinking of some of the members of the Senate is if we were asked to ratify, by the Constitution, then it means that we must be able to ratify also upon termination,” Sotto told reporters in a media interview.

“The Presidency and the Senate have their roles in foreign affairs. We represent the same nation but we can differ in perspectives. We believe in maintaining cordial relations with friends and allies,” Sotto said.

During the Senate session on Tuesday, Drilon raised that at least 14 senators during the 17th Congress had filed a resolution “expressing the sense of the Senate” that withdrawal from any treaty or international agreement concurred in by the chamber should not be valid without another Senate concurrence.

“We strongly submit that in our case, the Supreme Court will have to rule on this and that sense of the Senate was manifested in the 17th Congress,” Drilon said.

‘Bring it to Supreme Court’

The Senate resolution filed during the previous Congress was not acted upon.

The High Court has yet to issue a decision on the Philippines’ withdrawal from the International Criminal Court, which may set the guidelines on terminating international agreements.

Gordon suggested that the same senators who signed the resolution in the 17th Congress, take the same position with VFA termination.

“If we keep quiet, it remains a political question…We have the duty also that we don’t shirk with our responsibilities and tell the Filipino people that we disagree with the President. And now we have a Consitutional issue that can now be brought to the Supreme Court of the Republic of the Philippines,” Gordon said.

“We don’t want to lock horns with the President because we agree you are the horseman. But we sail the same ship of the State and therefore we must have a say especially in this important matter,” Gordon said.

While the Senate President said he’s not 100% behind the idea of Senate concurrence, Sotto said it is only proper to review the “very serious” implications of terminating defense treaties. (FULL TEXT: Locsin on impact assessment of VFA termination)

Senator Manny Pacquiao, who frequents the US for his boxing bouts, also supported the idea of reviewing the VFA first.

“If we are not happy with the VFA, we should at least try to bring the US to the table and find a solution to our concerns instead of just throwing it out the window,” Pacquiao said in an earlier statement.

But with the Philippines finally informing the US Embassy of its intent to end the defense agreement, Sotto said: “It appears that the President does not want to review the VFA, and that he does not want to consider. It’s as simple as that.”

The agreement will be officially terminated after 180 days. Sotto said there’s “no use” to review the agreement then.

The buck stops with the President?

The Senate on Monday night, February 10 had adopted a resolution urging Malacañang to reconsider the plan to scrap the VFA. Senator Aquilino Pimentel III, the president of the ruling party PDP-Laban which Duterte chairs, sponsored the resolution recommending a review of VFA termination.

With majority voting in the affirmative, Senator Ronald “Bato” dela Rosa, the reason for the termination of VFA over his canceled US visa, was the only one who abstained from voting on Monday night.

But during Tuesday’s session, Duterte’s allies Senators Francis Tolentino, Pia Cayetano, Cynthia Villar, Christopher “Bong” Go, and Bong Revilla said they were abstaining from the vote, as all of them were not in the session hall when the voting happened.

Senator Imee Marcos also abstained on Tuesday, saying that she was not aware that the voting has already happened, despite being inside the Senate session hall.

Duterte’s allies in the Senate all maintained that the President, as the “chief architect” of foreign policy, has the power to unilaterally end a treaty.

“Can the Senate then inquire into the President’s wisdom to abrogate a treaty? I say no. By reason of his office, the President has access to the most comprehensive and confidential diplomatic information and ultra-sensitive military intelligence data,” Tolentino said in a privilege speech on Tuesday.

Dela Rosa acknowledged that the military will lose training benefits with the US pact. But he said, it’s still better for the Philippines to be “ran by Filipinos.”

(It’s better to have a Philippines that is run by disajointed policies, than run efficiently but with foreign interference.)

Despite the changes, 13 senators still voted in favor of the resolution. Therefore, the passage of the measure was still valid. The Senate will still transmit the approved resolution to Malacañang despite the VFA abrogation.

Pimentel, meanwhile, told Rappler that it was the decision of the President to end the treaty, hence should be “supported.”

The VFA, which took effect in 1999, outlined guidelines for the conduct of American troops visiting the Philippines and is the foundation for military exercises between the Philippines and the US, some of which the Duterte adminstration has already stopped.

Duterte first threatened the abrogation of the VFA in 2016, when the Millennium Challenge Corporation, a US aid-giving body, did not renew its grant to the Philippines over human rights concerns on the Philippines’ war on drugs. – Rappler.com