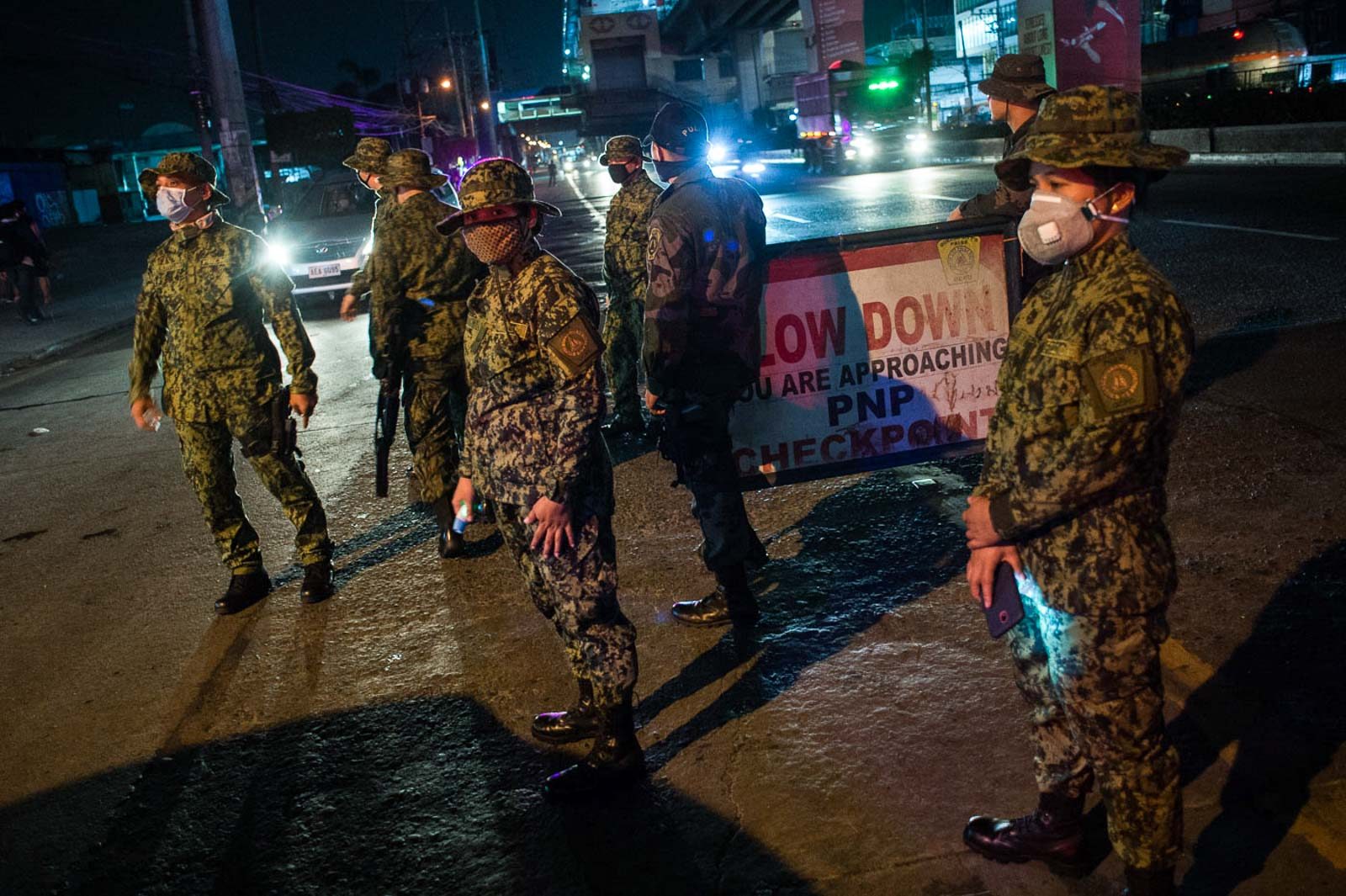 Facebook Twitter Copy URL
Copied
Not all passengers get their temperatures taken, while several entry and exit points have no checkpoints

MANILA, Philippines– On the first day of lockdown or the so-called “community quarantine” of Metro Manila, different checkpoints in several cities had their own ways of implementing rules to contain the novel coronavirus.

In Balintawak, Quezon City, motorists heading toward the North Luzon Expressway (NLEX) were randomly stopped by police for temperature checks. Chosen drivers and passengers were also asked about the nature of their travel.

Rappler noticed that buses that contained many passengers were not asked to stop for the checkpoint. Police seemed to be inclined to stopping taxis, trucks carrying food, motorcycle riders, and small private vehicles.

Most drivers were not asked to show identification cards or proof of employment.

Moreover, there seemed to be no checkpoints for vehicles passing through the NLEX-Balintawak exit to get to the city.

Meanwhile there were no checkpoints to monitor vehicles going in and out of NLEX and Marilao, Bulacan.

From the NLEX-Marilao entrance, vehicles can easily get to other areas like San Jose del Monte, which connects to Caloocan City and Novaliches, Quezon City.

In a checkpoint along MacArthur Highway, Valenzuela City, dozens of military personnel stopped most motorists and asked for IDs.

Individuals with no IDs have to show proof of employment. In the Cainta-Marikina border, temperature checks are only for those on motorcycles and not four-wheel vehicles.

“The purpose of the questioning here is to know why they’re going to Cainta and why they are leaving Cainta. That’s actually the quarantine procedure that we’re trying to implement,” said Cainta Mayor Kit Nieto.

“If we do thermal scanning on all passengers, this is going to take forever. The sun will be up before we’re done checking. There’s another group that handles that. But our primary purpose here is to ask: what is your purpose for entering our town?,” he said in a mix of English and Filipino.

Barangay San Isidro, Cainta chief Ricardo Licup said they turned away a taxi, since the passenger’s ID revealed that he is a resident of a town in Mindanao town and he only wanted to visit a friend. 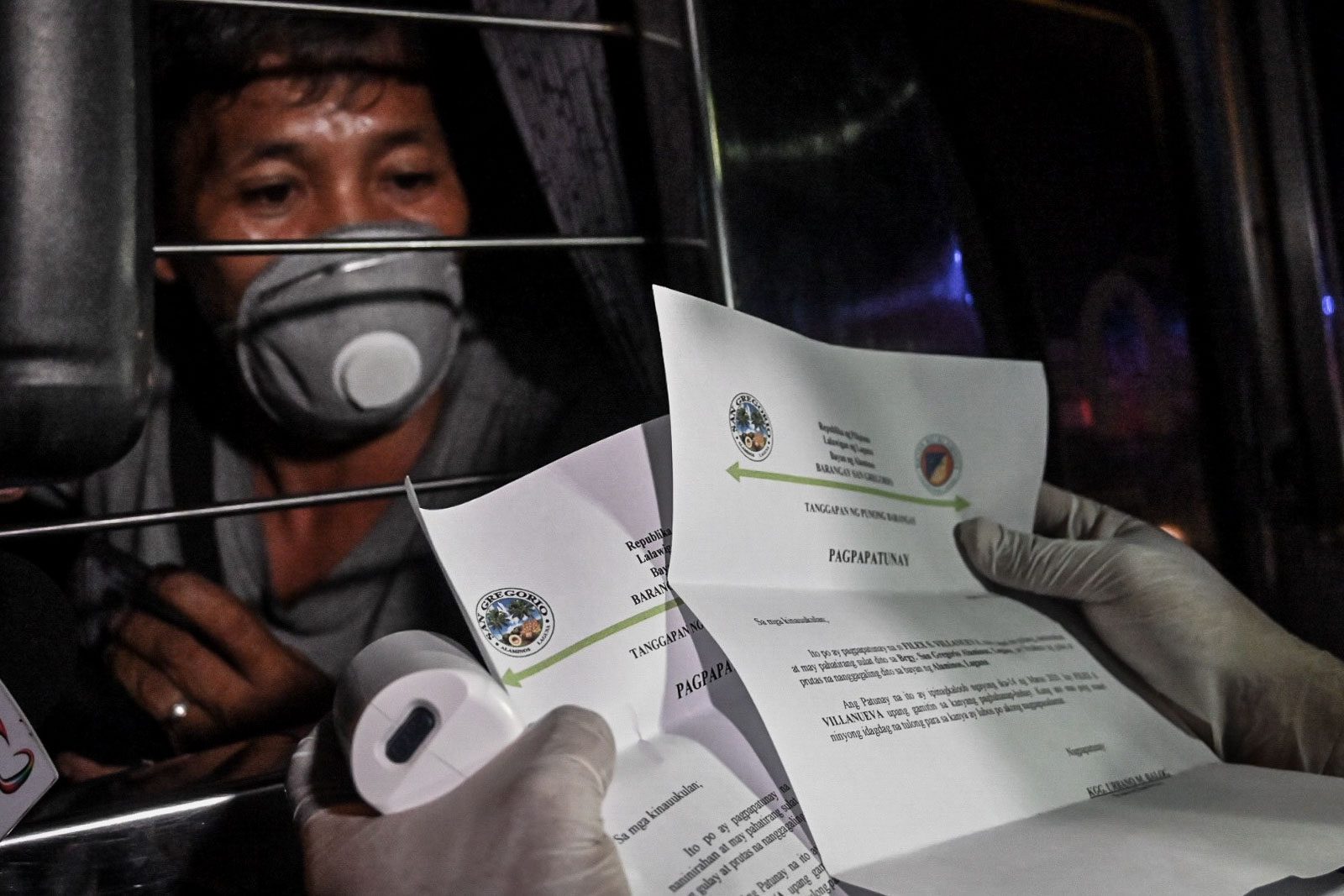 Hours before the lockdown was to take effect, checkpoints were no where to be seen across major thoroughfares cutting through Muntinlupa – the southernmost border of Metro Manila.

Police at the boundary of San Pedro Laguna, and Barangay Tunasan, Muntinlupa arrived around 11 pm to put in prep barricades used to create one lane for commuters to go through. People coming to and from Muntinlupa were unsure of the specifics of the lockdown and asked police what they needed to have before entering and exiting Laguna.

Police allowed vehicles to pass through until 11:59 pm of Saturday. At the stroke of midnight on Sunday, police placed a sign to mark the checkpoint.

Rappler noticed jeepneys contained less passengers, while most commuters were ready with proper identification cards and certificates of employment.

Only one health worker was present as police on sight assisted with temperature checks on each passenger.

Police stopped every vehicle passing through and asked each commuter to show their IDs. Those who did not have IDs or essential travel to metro Manila were turned away. – Rappler.com