Facebook Twitter Copy URL
Copied
'LGUs should no longer implement localized lockdowns. It is the regional lockdown that should prevail,' says Davao City Mayor Sara Duterte, who chairs the region's development and peace and order councils

DAVAO CITY, Philippines – Davao City Mayor Sara Duterte, chair of the regional development and peace and order councils, said that all local government units in the Davao Region should allow the movement of people within the region – with some form of restrictions – as the region-wide lockdown took effect at 12:01 am on Thursday, March 19.

“LGUs should no longer implement localized lockdowns. It is the regional lockdown that should prevail,” she said.

Many local governments in Davao Region, including Davao City, had earlier placed their areas under community quarantine to help stem the spread of the coronavirus disease COVID-19.

Sara said that during the regional lockdown, those trying to accomplish business, following up on important things or emergencies, should not be hampered. She said those coming in should still be allowed if they are reporting for work but they should present their company IDs and procedures.

Sara also clarified that individuals or vehicles going out of the region should be allowed but they could not reenter in the next 14 days.

Sara made the clarification on the movement of people during the regional lockdown as some residents raised questions about it on the official Facebook pages of local government offices, possibly fanned by panic or lack of understanding of geography.

“If I am from Mintal (Tugbok district in Davao City), can I still go to San Pedro (a popular street in downtown Davao City)?” asked one.

Another netized also asked if he would still be allowed to enter Toril (a district in Davao City) from Sta Cruz, Davao del Sur.

“My husband said he can’t go home because of the lockdown,” a housewife from Davao del Sur told Rappler. Her husband works in Calinan, Davao City

Because of the confusion, several media outlets had put up maps of the Davao Region on social media.

But still, many social media users continued to ask similar questions on mobility from one area in Davao region  to another in the region.

“If you are from Davao de Oro, Davao del Sur, Davao Oriental, Davao del Norte and the cities and towns within them, you can move inside Davao Region,” Sara said.

She also said that in the case of the ban on Tagum residents from entering Davao City, the same had been lifted with the implementation of the regional lockdown.

“Those from Tagum can now move within the region if their travel is important,” she added.

Police began turning away people or restricting the number of logistics personnel from entering Davao region as the regional lockdown took effect midnight of Thursday.

At the borders of Davao del Sur and Sarangani province, and Davao del Sur and North Cotabato for example, a composite team from the police, the Provincial Health Office, soldiers, the Bureau of Fire Protection, and representatives from the local government units, manned the checkpoints in Barangay Kinuskusan in Bansalan town and Barangay Kiblagon in Sulop.

Davao del Sur police chief Lieutenant Colonel Alberto Lupaz said they expected resistance from individuals trying to enter the region via Davao del Sur, which was why those manning the checkpoints were told to be patient in explaining why they cannot be allowed in.

“The troops (were told) to be patient and courteous in handling the lockdown and adhere to the existing Police Operational Procedure and other PNP Command Guidelines, as well as the Executive Order on Community Quarantine issued by the Davao Sur Provincial Government headed by Governor Douglas  Cagas,” Lupaz said.

“As front liners, we are the shock absorbers of the anguishes of the people who will try to get in. But even then, let us do our job, this is for the safety of everyone,” he added. 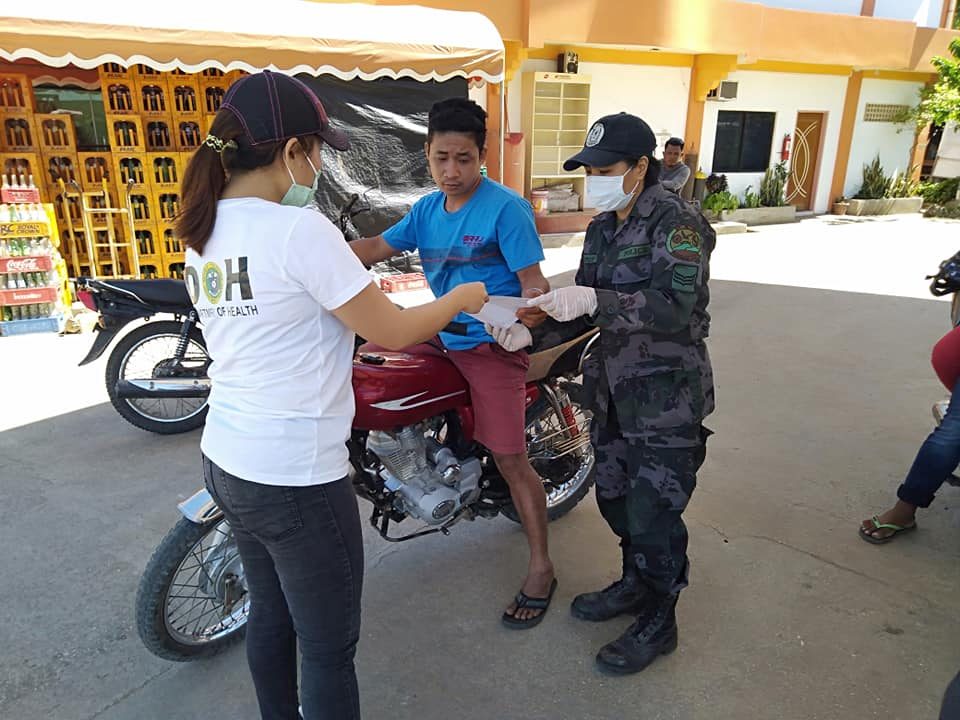 Lupaz said the instruction to the front liners was to deny entry to any person entering the Davao Region, “except for vehicles with cargo and one driver without an assistant.”

“Cargo shall mean to include all animals. Vehicle assistants may be unloaded at the checkpoint to wait for the vehicle to come back and leave Davao Region,” Lupaz said, reading the resolution of the Regional Task Force on COVID-19.

There had been minor issues, such as people insisting on coming in, according to the regional police office, but these were properly addressed.

North Cotabato Governor Nancy Catamco said that the Soccsksargen area or Region 12 will also be on lockdown starting March 23.

“The combined Regional Peace and Order Council and the Regional Disaster Risk Reduction Council met in Tacurong City on Wednesday and it was agreed to impose a lockdown on the region,” Catamco said.

She said the governors of the two Cotabato provinces, Sultan Kudarat and Sarangani; and the mayors of Tacurong, Kidapawan, Koronadal and General Santos cities, attended the meeting.

“The regional borders will be strictly manned and all seaports and airports will be shutdown to passengers and non-cargo,” she said.

Catamco said a regional curfew, starting from 9 am to 5 am had also been adopted.

“The provisions of the regional lockdown are similar to the ones adopted by Region 11,” she added. – Rappler.com