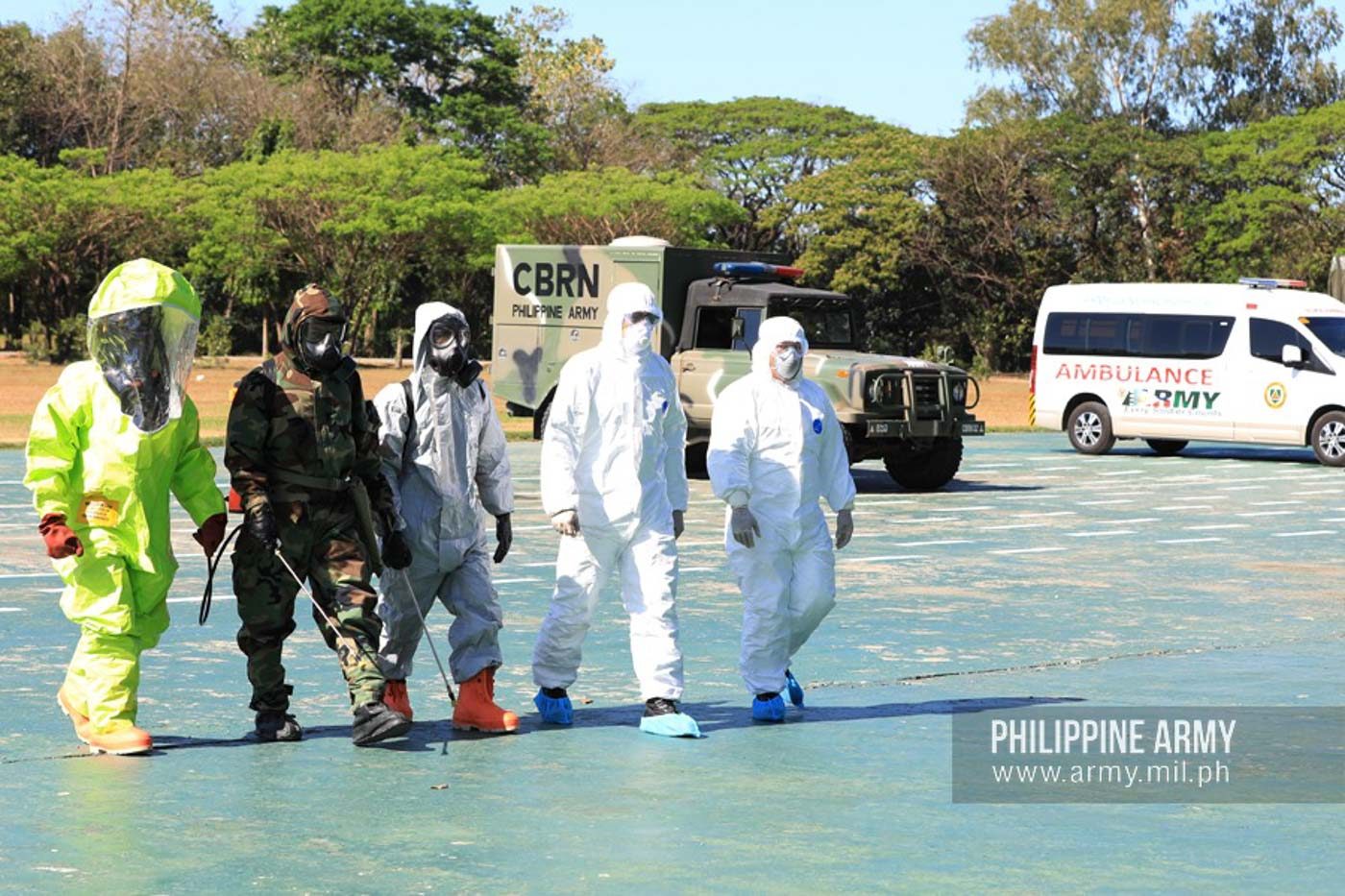 MANILA, Philippines – The Philippine Army canceled festivities to mark its 123rd founding anniversary originally set for Monday, March 23, to focus efforts on humanitarian assistance and disaster response amid the outbreak of the novel coronavirus.

Wearing face masks and sitting a meter apart from one another, Army troops at the headquarters witnessed a demonstration of disinfection procedures for soldiers returning from duty at checkpoints to barracks.

The Army’s Chemical, Biological, Radiological and Nuclear unit showed off their personal protective equipment and gadgets they use to disinfect fellow soldiers.

The Army has deployed some 440 troops to checkpoints since the “enhanced community quarantine” or lockdown of Luzon began on March 17. It has also sent out 18 of its trucks to service health workers and employees of essential businesses in the absence of public transportation, which is grounded because of the lockdown.

Soldiers deployed to assist persons potentially infected by the virus are trained and educated about the disease, as the Army itself steps up precautionary measures in its camps, it said in a media release.

A soldier who had been posted at a checkpoint in northern Metro Manila came down with a fever, and is now a “person under monitoring” for the coronavirus, Gapay told reporters.

(This is different from our traditional enemies because this enemy is not human, but very deadly. Even then, let us stay strong in fulfilling our sworn duty – to serve and protect the people and our country even if it costs us our lives.) Also on Monday, the Army received two donated ambulances: one from the Lucio Tan Group of Companies, and the other, from the Jaime V. Ongpin Foundation.

Both vehicles will be used by the Army General Hospital to “enhance its medical capabilities in support [of] the enhanced community quarantine,” the Army said in a separate media release.

The Army, as with the other branches of the military, is providing support to the police in enforcing the lockdown of Luzon and other parts of the Philippines to avert the novel coronavirus.

Although the Philippine National Police is the primary enforcer of the lockdown, there are checkpoints and outposts manned by the military.

As of Monday afternoon, the Philippines has recorded 462 confirmed cases of the coronavirus, with 33 deaths and 18 recoveries.

The Philippine Army traces its foundation to the establishment of the Philippine Revolutionary Government on March 22, 1897, in Tejeros, Cavite, with Emilio Aguinaldo as president and Artemio Ricarte as captain general.

The revolutionary government fought the Spanish colonial government for independence, which was first declared on June 12, 1898.

With more than 97,000 troops, the Army is the largest branch of service of the Armed Forces of the Philippines, which also includes the Air Force and the Navy. – Rappler.com