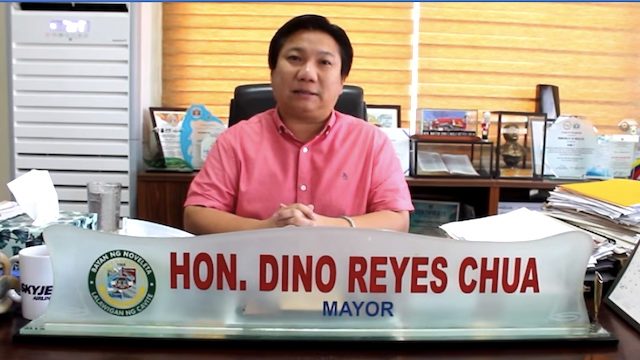 MANILA, Philippines (UPDATED) – Acting on the complaint of the Cavite City government, the Philippine National Police (PNP) filed a complaint against Noveleta Mayor Dino Reyes Chua and two others for allegedly “causing a COVID-19 scare” by spreading false posts on a coronavirus case in Cavite City.

The PNP said in a statement on Saturday, March 28, that its Regional Anti-Cybercrime Group (ACG) in Calabarzon filed before the Cavite City Prosecutors’ Office criminal complaint against Chua, who was allegedly behind false information posted online about a coronavirus case in Cavite City.

Also respondents to the complaint are Mario Batuigas, owner of Latigo News TV, and Amor Virata, a vlogger and online reporter.

The PNP-ACG said the 3 allegedly violated the following:

The PNP said the complaint stemmed from a Facebook post of a user named “Maggie Bernal” that showed 10 pictures of supposed persons under investigation for coronavirus in Cavite City. The post also “shared an unverified information that a COVID-19-stricken patient died at the Cavite Medical Center.”

“Maggie Bernal” also accused the Cavite City government of not being transparent in sharing information with the public.

“The unverified post has caused panic among citizens of the city,” PNP-ACG said.

The PNP said that city government debunked the claims and proved the information to be false, based on the fact-checking of the Rural Health Unit of Cavite City.

The PNP-ACG said that, based on its investigation, Chua allegedly had the Maggie Bernal “troll account” created to attack his political rivals.

“Cybercops found out that a troll account named as Maggie Bernal, originally named as Angela Mae de Guzman, was created by Chua in 2010 and was used to attack their political opponents and create intrigues based on the affidavit of a witness who was the creator and former administrator of the troll account,” the PNP said.

The PNP said the creator and former administrator of the troll account executed an affidavit as a witness in the case.

Latigo News TV, an online news portal, posted the same information but did not name the patient, the PNP said.

Chua was unfazed by the charges. In a Facebook post addressed to Cavite City Mayor Totie Paredes and other city officials on Saturday, Chua continued to criticize the local government’s coronavirus management and said he was ready to defend himself in court.