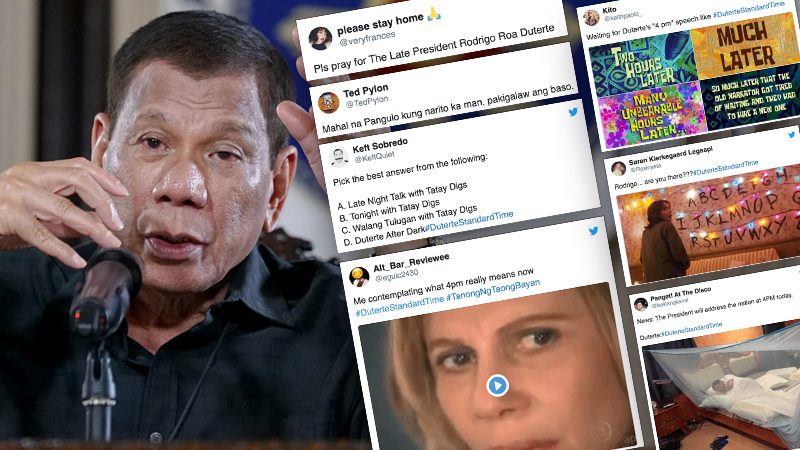 MANILA, Philippines – Punctuality is certainly not the President’s strongest suit.

On late Monday night, March 30, President Rodrigo Duterte’s pre-recorded address – supposed to air at 4 pm – was broadcast as live much later at around 11 pm, 7 hours past the original schedule.

This drew out frustration from many netizens who were expecting the President to address urgent concerns: the Bayanihan to Heal as One Act that grants Duterte “special” powers, the coronavirus situation in the country, and, essentially what everyone has been waiting for – a concrete plan to address the public health crisis.

Netizens expressed their dismay via memes, taking a jab at Duterte’s growing reputation as the “late” president. The hashtag #DuterteStandardTime trended Monday night, just as his public address aired.

Check out some of the most amusing tweets and memes so far:

Maybe, just maybe, the “spirit of the glass” could work.

Time is a social construct.

Who doesn’t love a good siesta?

News: The President will address the nation at 4PM today.

Pick the best answer from the following:

Blink the lights once if yes, blink twice if no.

This was not the first time this happened. Last March 20, Malacañang aired Duterte’s pre-recorded address midnight, past 1 am. And how could we forget – Duterte ran about an hour late for his 2019 State of the Nation Address (SONA), the most awaited public address of the nation’s leader?

A Twitter user reminded everyone not to normalize Duterte’s (lack of) “sense of urgency” as the country battles a pandemic.

Duterte Standard Time is not laughable at all. Two things: (1) He really doesn’t have any sense of urgency at the height of this pandemic, and (2) He does not give a fuck to this nation. Bec if he does, he will respect all of our time.

Here’s more because we can’t get enough:

What are your thoughts about Duterte’s punctuality issues? Let us know and share with us your favorites! – Rappler.com