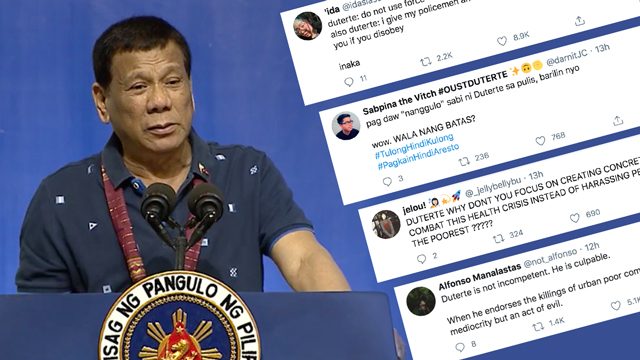 (The virus is the enemy, Mr. President, not the Filipino people.)

In an impromptu address on Wednesday, April 1, President Rodrigo Duterte ordered police and military to “shoot” residents “causing trouble” during the lockdown due to the novel coronavirus.

(I will not hesitate. My orders are to the police and military, also the barangay, that if there is trouble or the situation arises that people fight and your lives are on the line, shoot them dead.)

This comes after 21 Quezon City residents were arrested by police after protesting without a permit. There are conflicting accounts as to whether those arrested were all protesting or just looking for food, due to a lack of resources.

On the same day, the National Bureau of Investigation summoned Pasig City Mayor Vico Sotto for supposedly violating the Bayanihan to Heal as One Act, which was enacted for the President to ensure local government abides by national guidelines in responding to the coronavirus pandemic. (READ: #ProtectVico trends worldwide after NBI summons Pasig Mayor Vico Sotto)

Several netizens were angered by the President’s statement, as well as the national government’s overall response to the pandemic.

Here’s what netizens had to say:

What are your thoughts on how the national government is handling the pandemic? – Rappler.com