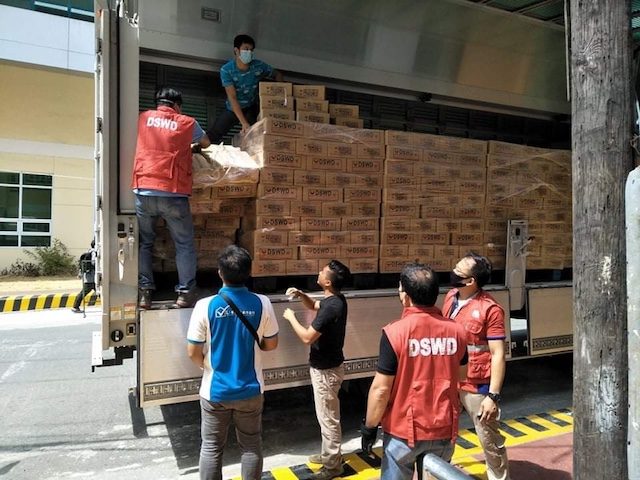 MANILA, Philippines – The Department of Social Welfare and Development (DSWD) said on Thursday, April 2, that P100 billion in cash aid is ready for distribution to 18 million poor families as emergency subsidy to help them cope with lockdowns due to the coronavirus pandemic.

The amount represents the half of the emergency subsidy for poor families, who will receive the cash aid for two months.

Cabinet Secretary Karlo Nograles said in a news briefing on Thursday that the DSWD will be on top of distributing the cash aid, with the help of local governments.

“The DSWD will exercise full control and supervision over the distribution of Emergency Subsidy Program funds. This will ensure that only  targeted beneficiary-families will receive the government subsidies,” Nograles said.

“The role of local government units will be limited to assisting in the distribution of the subsidies, with LGU personnel managed by the DILG with the assistance of the AFP and PNP,” he added.

As per the Bayanihan to Heal as One Act, each of the 18 million low income households will receive from P5,000 to P8,000 a month for two months in light of the novel coronavirus pandemic, under the social amelioration program.

Joint Memorandum Circular No. 1 on social amelioration defined how much each family will receive based on the regional minimum wage. This emergency subsidy will be added on top of existing conditional cash transfers of up to a maximum of P8,000 per month.

For example, if a family in Metro Manila is receiving P3,000 in conditional cash grant and rice subsidy, then that family will only receive P5,000 in emergency subsidy.

Food packs to depend on level of need

To avail of the social amelioration program, households have to register with a social amelioration card (SAC) form that local government units (LGUs) are to distribute on a “house to house” basis. This form will allow the DSWD to assess the level of need for each household.

Social Welfare Secretary Rolando Bautista said during the the Laging Handa briefing that although all the 18 million families will receive cash aid, getting additional food packs would depend on their level of need.

Food packs are not part of the social amelioration program, but part of DSWD’s “resource augmentation to LGUs,” DSWD spokesperson Irene Dumlao clarified.

“Kaya siya may pera para ‘yun ang gagamitin for a duration of one month,” he added.

(We have family food packs, but of course they will receive cash assistance. The cash can be used to buy food and household needs. So that might be listed in the SAC. When the time comes to distribute food packs, and we see that they already received cash assistance, the LGUs might not give them priority for food packs anymore. The reason they receive money is to use it for one month.)

Bautista also said discussions are underway to prioritize informal workers. He said the Land Transportation Franchising and Regulatory Board (LTFRB) has given the DSWD an initial list of drivers.

On Wednesday, April 1, a Quezon City residents staged a protest to demand government aid after weeks of being unable to earn money to buy necessities. A commotion broke out in the street and ended with 21 people arrested for protesting without a permit.

That night, President Rodrigo Duterte said he had “removed politics” from the distribution program in handing it over to the DSWD and the National Task Force (NTF) COVID-19 chief implementer, Chief Peace Adviser Carlito Galvez Jr.

He ordered the police and military to “shoot” unruly quarantine violators dead.

Senator Nancy Binay earlier took a swipe at the DSWD for its “slow” release of food packs. As of 6 am on Monday, the DSWD has released 121,803 family food packs nationwide.

“If the DSWD is really serious in providing immediate assistance to those who are affected by the lockdown, then bilisan naman ang ayuda (speed up the release of aid),” Binay said.

The Philippines is under a state of calamity, and the entire Luzon under “enhanced community quarantine” or total lockdown to prevent the spread of the novel coronavirus. Other parts of the country are also on lockdown to help stem the outbreak.

As of noon of April 2, there were 2,311 reported cases of coronavirus disease (COVID-19) in the country, with 96 deaths and 50 recoveries. – Rappler.com