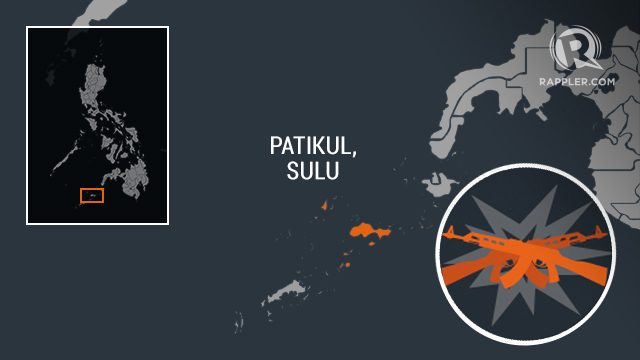 MANILA, Philippines (4th UPDATE) – Eleven Philippine Army soldiers were killed and 14 others wounded in a gunbattle with the Abu Sayyaf Group (ASG) in Patikul, Sulu, on Friday, April 17, the Armed Forces of the Phillippines (AFP) Western Mindanao Command (Westmincom) confirmed to Rappler.

Troops from the Army’s 21st Infantry Battalion on a strike operation against the terror group encountered around 40 of its members in Sitio Lubong, Barangay Danag, at 3:05 pm, resulting in an hour-long firefight, according to a report confirmed by AFP Westmincom chief Lieutenant General Cirilito Sobejana.

The ASG members were led by the group’s top leader Radullan Sahiron, and the subleader of its pro-Islamic State faction Hatib Hajan Sawadjaan, according to the spot report seen by Rappler.

Bloodstains on the clash site indicate an undetermined number of casualties among the ASG, who fled the vicinity after the encounter.

Government troops lost 7 R4 rifles, one with a 40mm grenade launcher attached, a K3 saw, and a handheld Harris Radio unit – used by the military for secure communications.

Troops from other military units, including the 5th Scout Ranger Battalion, the 6th Special Forces Battalion, the 32nd Infantry Battalion, and the 1st Brigade Combat Team, were called in for reinforcement and increased firepower. A unit of the Air Force deployed two Augusta Westland 109 helicopters to support the engaged troops.

Combat operations were still underway as of 9:30 pm Friday, according to Major General Corleto Vinluan, commander of the Army’s 11th Infantry Division based in Sulu.

In a statement, the AFP said the national flag will be flown at half staff at military camps all over the country in honor of the fallen soldiers.

AFP chief of staff General Felimon Santos Jr hailed them as heroes, and expressed his condolences to their families. Santos ensured that all necessary assistance will be extended to the bereaved, the AFP said.

Malacañang condemned the incident “in the strongest possible terms” and condoled with the families of the fallen soldiers.

“The Office of the President  expresses its sincerest condolences to the bereaved families left behind by our brave soldiers who fought hard and paid the ultimate sacrifice to secure our community. We honor and pray for the fallen,” Presidential Spokesperson Harry Roque said in a statement on Saturday, April 18. – Rappler.com