“Gaisano Cordova, ano na (what now)?” Emeliano said in her post, which was published on Tuesday, April 21, and had only one share. “Last month there were no stocks and now there’s still none?” she asked. She then addressed the town’s mayor, Mary Therese “Teche” Sitoy-Cho, asking in Cebuano, “Please kindly acknowledge this and check the situation in Cordova Gaisano! It’s been like this for a month. There’s only a few people who live in our town and our shelves get depleted.”

Cordova is a municipality next to Lapu-Lapu City, with a population of about 59,000 people.

The town is under the jurisdiction of the province of Cebu, which has been under lockdown – or enhanced community quarantine – since March 30.

Emeliano made another post at around 7 pm on Wednesday, April 22, tagging the mayor’s personal accounts to bring attention to her concern.

“There is no money in the ATM machines, there are no stocks in the groceries, and the markets are empty,” she said in Cebuano. “Mayor [Sitoy-Cho], action plan please! I know you’re doing your job helping Cordovanons to distribute assistance, but please check the essential needs of the people. We can’t always depend on your plan, because we have our basic needs,” her post said. 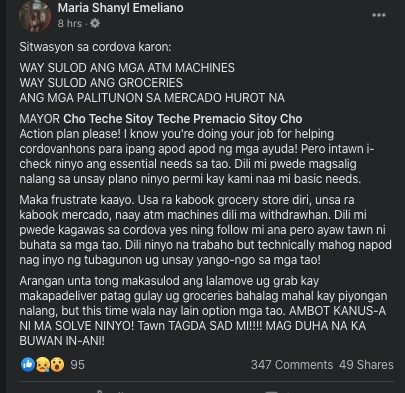 This post got the attention of the mayor, who did not take it lightly and defended her administration’s implementation of the enhanced community quarantine in the comments section. The mayor replied at least 23 times on the post.

The post had about 329 comments and 40 shares before Emeliano made it private. Emeliano allowed Rappler access to the comments thread.

“Watch what you say that isn’t correct and has no basis, because you will have to answer for this, as it causes panic or agitation,” Sitoy-Cho said in Cebuano in the thread. “You also accused me of doing something. You said, ‘Don’t do that to the people.’ What did I do that was wrong to the people to make you say that?” she added.

“We’re monitoring posts that aren’t correct and that would cause people to panic,” the mayor warned in another comment.

“And it’s not right to say that we’re 2 months into this situation in Cordova. It will cause panic among people when you say that there aren’t stocks in the groceries and the supplies in the market are depleted,” she added.

Within an hour of the second post, 3 police officers also showed up at Emeliano’s house to question her about it and speak to the mayor via phone.

“The mayor told me the post read like I was blaming her for the situation,” Emeliano told Rappler. “She said that she had to take action because it was causing the people to panic.”

The police then left once the call was over.

Jessica Banzon-Natad, a lawyer who works for the mayor, also commented on the thread in Cebuano.

“You should check the details first. You should not speak wrongly just to have something to say. Remember, someone was detained in Cebu City because they were spreading wrong information,” she said.

She added: “This is not the time to vent too much about how we feel, because many people will be affected. You guys are hurting people again, people who are trying their best to protect us against this invisible enemy. I’ll say it again: it’s not just us who are going through this, but the whole world.”

Rappler tried to reach Natad and Sitoy-Cho for their side but has not yet received a response as of posting time.

The person in Cebu City Natad was referring to was Maria Victoria “Bambi” Beltran, who was arrested by the cybercrime unit of the Philippine National Police on Sunday, April 19, for a sarcastic post she made on Sitio Zapatera, the area with the highest number of confirmed coronavirus cases in Cebu. (READ: Cebu film writer arrested over Facebook post about coronavirus in Sitio Zapatera)

The post – which got 4 shares at the time it was re-shared by Cebu City Mayor Edgar Labella – said the area had “9,000 new cases” and sarcastically said it was the COVID-19 “epicenter of the solar system.”

Labella also said the post – which got 2,000 shares only after he reposted it on his page – was “fake news” and, like Sitoy-Cho, said that it was causing panic. (READ: Labella on the arrest of Cebu artist Bambi Beltran: ‘It’s nothing personal)

Aside from the cybercrime law and the fake news provisions of the Bayanihan Heal As One Act, the province of Cebu also passed an ordinance last March penalizing those who share “fake news” with a fine of P5,000 and up to one year in prison.   (READ: Bayanihan Act’s sanction vs ‘false’ info the ‘most dangerous’)

Cebu Governor Gwen Garcia had also vowed to go after those who post “fake news” about the coronavirus outbreak since March.

According to the state-run Philippine News Agency, on March 19, Garcia shared screenshots of a group chat alleging that 10 people had died of COVID-19 and that the city was trying to cover it up. She said she would sue the one who posted the allegation in the group chat.

“Philippine authorities are increasingly using the COVID-19 pandemic and new public health restrictions as an excuse to charge political opponents and activists with criminal offenses,” HRW said in its statement.

They also urged dropping charges against Beltran – who is countersuing Labella for violating her rights – and other critics facing criminal charges by the govenrment.

While Emeliano has not been charged yet, she said she does not plan to take down the post, nor apologize for raising what she believes is a legitimate concern and not “fake news.”

“All I was asking for was transparency,” Emeliano said.

As of Wednesday, the Philippines has 6,710 coronavirus cases, with 446 deaths and 693 recoveries. – Rappler.com