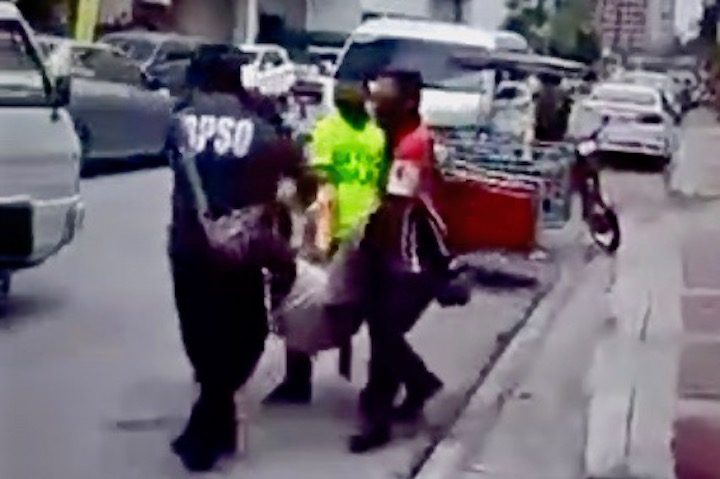 MANILA, Philippines (UPDATED) – A man identified by locals as a fish vendor was mauled and dragged by Quezon City authorities after failing to wear a face mask and bringing a quarantine pass while selling outdoors.

At around 12:30 pm on Monday, April 27, authorities from the Office of the Mayor’s Oplan Task Force Disiplina spotted fish vendor Michael Rubuia along Panay Avenue in Quezon City, not wearing a face mask. They decided to arrest him but MIchael did not want to come with them.

“Nagtatakbo siya humawak, sa bakal. Hinahatak nila, ayaw bumitaw. Bumitaw pero hindi nanlaban. Doon na nila pinagtulungang hatawin,” Yolly Aragon, a witness to the incident who worked at a laundry shop near where the incident happened, told Rappler in a phone interview on Tuesday, April 28. (He ran and held on to a railing. They pulled him and he let go. He did not fight back. That was when they hit him)

Aragon said she just heard the screams outside and the sound of wood hitting flesh. She came to look and she saw authorities hitting Rubuia repeatedly. She rushed back to the laundry shop to get her cellphone and record the incident.

In the video, 4 masked men are seen dragging Rubuia towards an L300 van, while another man held a wooden stick and kept hitting him. He was screaming and crying.

“Wala naman po akong ginagawa eh (I have not done anything),” said Rubuia as 4 pairs of hands lifted him into the van.

According to the police report of the incident obtained by Rappler,  Rubuia was turned over by the local officials to cops at the Kamuning Police Station, where he continues to be detained.

Residents incensed: The incident caused a stir among residents and other workers in the area, with Aragon repeatedly shouting at the officials to handle Rubuia better.

“You’re abusing your power. Hindi ‘nyo dapat gulpihin ang isang tao (You should not clobber another person),” she is heard shouting in the video.

Aragon answered back: “Itali ninyo parang baboy pero wala kayong karapatang manakit. Ginugulpi nila eh (Tie him like a pig, but you don’t have the right to hurt him. You are hitting him).”

“’Yung ginagawa ninyo hindi tama ‘yon kahit mataas pa kayo (What you are doing, it is not right, even if you have high positions),” another woman is heard shouting in the video. (READ: If you’re arrested or detained, know these rights)

A lady guard who worked nearby added to the chorus before the officials took Rubuia away: “Tao ‘yan, hindi ‘yan aso (He is a person, not a dog).”

Rubuia, according to Aragon, is known by them as a fish vendor who was allowed to sell in front of a water station in the same area along Panay Avenue. He worked as an assistant selling shrimp, milkfish, and mackarel.

(We are under COVID now, there are a lot of problems. I hope those in power don’t abuse their positions, that they don’t hurt people immediately. There are many ways to arrest a person, especially if they are just arresting one person.)

Investigation begins: In a statement, the Quezon City local government said it has begun a “full-blown investigation” into the incident.

It added: “While the City Government reiterates its resolve to fully enforce ECQ Protocols at this time of the COVID-19 pandemic, all its personnel and agents are strongly reminded to always conduct themselves with proper decorum and restraint, and to observe compassion and tolerance, especially in these difficult times.”

The incident adds to reports of overzealous police and local officials enforcing the coronavirus lockdown too aggressively to the point of endangering their constituents’ human rights.

Human Rights Watch earlier called on the Philippine government to push its law enforcers and officials to respect human rights, and if it finds abuses, it should prosecute violators. – Rappler.com