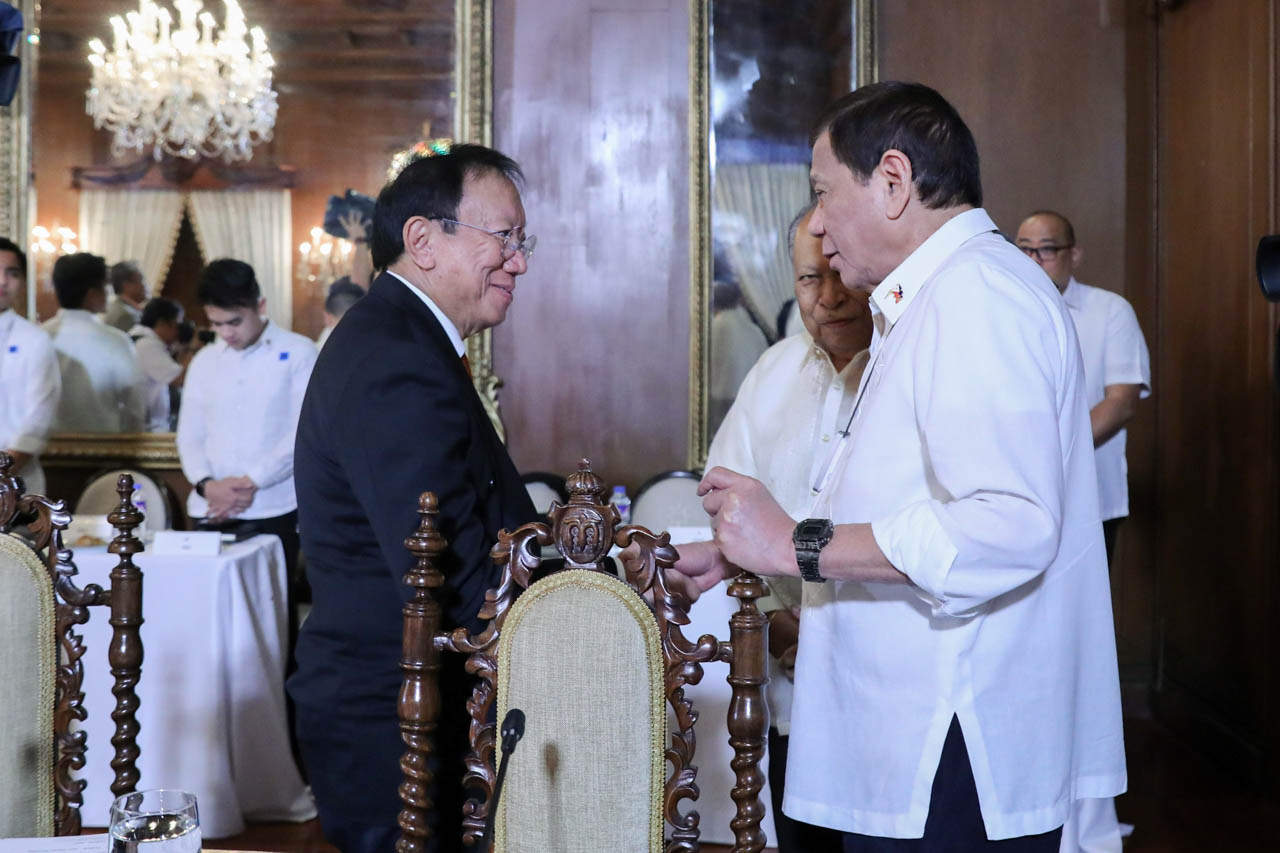 Duterte, then Special Counsel for Military and Police Matters under the City Fiscal’s Office, was the prosecutor handling the case of Lt. Jose Pallarca. (Editor’s note: This story first appeared in Mindanews. Check it here.)

Bello was Duterte’s dormmate at the YMCA in Manila when they were law students, Bello at the Ateneo de Manila University (ADMU) and Duterte at San Beda College. Calida, a dean’s lister at the ADMU was Bello’s fraternity brother in the Aquila Legis.

Duterte is now the 16th President of the Philippines and the first Mindanawon to lead the nation, Bello is labor secretary and Calida, the solicitor general who early this year filed a quo warranto petition before the Supreme Court for the cancellation of the franchise of ABS-CBN, a franchise that was to expire on May 4, 2020. Fourteen bills filed to have the network’s franchise renewed remain pending at the Committee on Legislative Franchises.

On May 3, World Press Freedom Day, and eve of the expiration of ABS-CBN’s franchise, Calida warned the National Telecommunications Commission (NTC) against granting a provisional authority to the country’s largest broadcast network to allow it to operate while its franchise renewal is pending in Congress.

The NTC on May 5 issued a cease and desist order against ABS-CBN, directing it to stop operating its television and radio broadcasting stations nationwide “absent a valid congressional franchise required by law.”

Two months earlier, on March 10, NTC Commissioner Gamaliel Cordoba said they would follow the advice of the Department of Justice to allow ABS-CBN to operate while its franchise renewal is pending in Congress.

“The NTC will follow the latest advice of the DOJ (Department of Justice) and let ABS-CBN continue operations based on equity,” Cordoba said at the hearing of the  House Committee on Legislative Franchises.

In Earl Parreño’s 227-page book, Beyond Will and Power, a biography of President Duterte, Calida is featured thrice – how he met Duterte and how they became friends; the last-minute filing of a certificate of candidacy (COC) for President by a PDP-Laban official on October 16, 2015 when Duterte did not show up at the Commission on Elections in Manila; and how Calida pushed for a Duterte-Ferdinand “Bongbong” Marcos team-up.

“Known for his audacious promotion of unorthodox legal theories and tactics,” Parreño wrote on the 1970s case that brought Calida and Duterte together, Calida requested then-fiscal (now referred to as Prosecutor) Duterte “to allow him to have a reenactment of the shoot-out” which implicated his client, Pallarca.

Parreño quoted Calida as telling Duterte, “It’s not in the rules of court but you will have a better perception of the case if you will allow us to have a reenactment.” Duterte agreed. The complaint against Pallarca was dismissed. The friendship between Calida and Duterte was “cemented,” Parreño wrote,  by their mutual love for guns.

Calida, according to the book, is a competitive shooter and he and Duterte often went to the shooting range with Bello, Caesar “Billy” Dulay who was then chief legal counsel of Alcantara & Sons, and the late Jess Pinlac.

Dulay, a dormmate along with Bello, is now Commissioner of the Bureau of Internal Revenue.

What happened in October 2015

The book recounts what happened on Friday, October16, 2015, the last day for filing of certificates of candidacy. Calida and other supporters were already in the Manila Hotel a day earlier to prepare for Duterte’s filing of his COC for president but shortly after noon of Friday, the book said, the team was shocked when Duterte filed his COC for mayor in Davao City.

Duterte actually filed his COC for mayor of Davao City not on Friday as the book said, but at 2:40 pm on Thursday, October 15, through City Administrator Jesus Melchor Quitain and Chief Executive Assistant and personal aide Christopher Lawrence “Bong” Go, but supporters hoped he would change his mind and appear at the Comelec in Manila on or before 5 pm of Friday, October 16, to file his COC for president.

“We all felt dismayed,” the book quotes Calida as saying upon learning Duterte filed his COC for mayor. “Then at about two o’clock, I asked Dante Jimenez to look for a stand-in.” The idea was for someone to file a COC for president so that if they could convince Duterte to run for president, he can run as the substitute candidate. Jimenez got PDP-Laban’s Martin Dino to file his COC for president. Substitution of candidates was allowed until December 10.

On November 27, Duterte withdrew his COC for mayor and, through lawyer Salvador Medialdea (now Executive Secretary), filed his COC for president, substituting for Dino.

Calida, according to the book, thought of having a stand-in to file a COC for president.

Go has another version. He recalled in a telephone interview with MindaNews in March 2018 (he was then being egged by Cabinet members to run for the Senate), that he had anticipated Duterte would be a no-show at the Comelec in Manila on October 16, 2015. He said his nocturnal boss was still asleep mid-morning when he phoned Senator Aquilino Pimentel III, PDP-Laban party president, suggesting that somebody from the party should file a COC for president.

“It was my idea para hindi magalit ang mga tao” (so his supporters won’t get mad), said Go, who is now senator but is still often seen beside or behind President Duterte in the latter’s public and private events. Supporters, he said, were given a “slim hope” that Duterte would change his mind and run for president.

The book narrates that “a week or so before All Souls’ Day” in 2015, Calida met with Duterte at the Grand Men Seng hotel in Davao City to talk about his running mate, should he run. “He and some Ilocanos in the campaign like (Hermogenes) Esperon (now National Security Adviser) were pushing for Bongbong Marcos to be Digong’s Vice President,” a move the book said, was opposed by the Dominguez brothers (Carlos, now Finance Secretary, and Paul, now a member of the Board of Directors of the Asian Development Bank) and the Pimentels (Aquilino Jr. and Aquilino III), who fought the Marcos dictatorship and did not want their candidate associated with Marcos.

According to the book, Calida “untiringly asked Digong (Duterte’s nickname) to first meet Bongbong before the mayor would finally make his choice. In that meeting, the mayor agreed. So Calida called up Jonathan dela Cruz,  Bongbong’s campaign manager, to inquire about his principal’s schedule so he can meet up with the mayor. Then he called up Bong Go only to be told that the mayor’s schedule was already full in the next several weeks.”

On November 21, 2015, Duterte announced in the birthday celebration of Atty. Alfredo Lim in Cavite City that he was running for president. The next day, according to the book, Duterte signed the COC for president and other documents for filing before the Comelec, and flew to Hong Kong on the 23rd.

The book narrated that when Calida heard Duterte’s announcement that he would run for the top post, he “again tried to schedule a meeting between Digong and Bongbong.”

Duterte arrived from Hong Kong on November 25, 2015 and proceeded to Davao City on November 26. “Wanting very much for his two friends to meet up and talk, Calida made a way for Bongbong to be booked on the same flight with Digong,” the book said.

Duterte and Calida met at the airport and sat beside each other inside the plane. “But the original agenda of the meeting, the possibility of them running in tandem, was no longer on the table.”

The reason, according to the book is that Duterte and Senator Alan Peter Cayetano “had already firmed up their alliance in Hong Kong.”

But Duterte, according to the book, consented to have his Ilocano supporters form a group that would carry Marcos as his Vice President, hence the Alyansang Duterte-Bongbong or “Aldub.”

Duterte did not immediately offer Vice President Leni Robredo a Cabinet post when he assumed the Presidency because, he told a press conference in Davao City on May 31, 2016, “I don’t want to hurt the feelings of Bongbong Marcos. He is my friend. That is the political reality.”

As solicitor general, among the first things Calida did was to push for the burial of the dictator Ferdinand Marcos, Sr., Bongbong’s father, at the Libingan ng mga Bayani. Marcos’s remains were eventually buried, albeit in a clandestine manner, in November 2016.

Duterte himself said it was Calida who pushed for the burial of Marcos. “In one of those meetings here regarding the issue of the burial of President Marcos,” Duterte told Malacanang reporters on May 16, 2018, Calida was “yung pinaka-ano (really pushing for it) and Calida is passionately, pro-Marcos ‘yan. Ilocano eh.” In the earlier part of the interview, he said, “I think he is related to the Marcoses.”

Calida in September 2016 stressed that the President’s order to bury the remains of Marcos at the Heroes’ Cemetery is “for national healing” and was based on the Constitution and on his residual powers as chief executive and commander-in-chief.

The book said Calida is the only child of public school teachers from Ilocos Norte who migrated to Mawab in Davao del Norte (Mawab later became part of Compostela Valley province, now renamed Davao de Oro province), where he spent his first four years in elementary. From there the Calida family moved to Davao City where he finished elementary in a public school, and earned a scholarship from high school to college at the Ateneo de Davao University.

The SolGen website said Calida passed the bar in the same year “with ratings of 100% in criminal law, 90% in civil law, and 90% in taxation law.”

Before joining government, Calida went into private practice first and even taught Law at the Ateneo de Davao University.

He served as chief legal counsel and corporate secretary of Alcantara & Sons Group of Companies in Davao City, Assistant Vice President for Legal and Head, Litigation Group of Security Bank.

At the J. Calida & Associates Law Firm, he specialized in litigation, the anti-money laundering law, and the dangerous drugs law, the OSG website said.

When he joined government, Calida served as Undersecretary of the Department of Justice from 2001 to 2004. There, he was in charge of the National Bureau of Investigation (NBI), Witness Protection Security and Benefits Program, Office of the Government Corporate Counsel, DOJ National task Force on Terrorism and Internal Security, and DOJ Task Force on Financial Fraud and Money Laundering.

He also served as Executive Director of the Dangerous Drugs Board (DDB) in 2004. where he conceptualized and implemented the ‘Barkada Kontra Droga,” the DDB’s flagship project in drug prevention and control. He also implemented the ‘Lakbay Arkal Kontra Droga” and “Lakbay Kontra Droga,” which were both aimed at heightening public awareness in the governemtn’s anti-drug policies and programs.

The OSG website also said Calida is “a gun enthusiast and an accomplished sharpshooter, with numerous shooting titles under his belt.”

He is married to Milagros with whom he has three children, Michelle, and lawyers Josef and Jorel. – Rappler.com

This story was first published on May 8, 2020 on mindanews.com. We are reprinting with Mindanews’ permission.