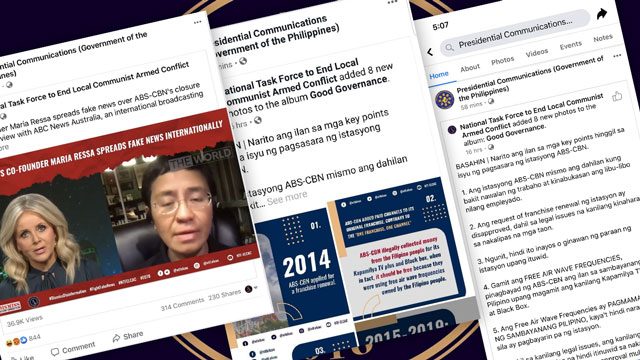 Facebook Twitter Copy URL
Copied
(UPDATED) Following public backlash, the PCOO takes down the posts and says it's taking measures to 'uphold accountability' over the incident

The government task force – of which the Palace communication team is a member of – incorrectly claimed in a series of social media posts that the franchise renewal of ABS-CBN has been disapproved, citing “legal issues” that the broadcasting giant supposedly need to address yet.

Calling it a “black propaganda offensive,” the statement described the Facebook posts which have already been taken down as a “brazenly criminal abuse of authority on the part of the NTF-ELCAC, replete with half-truths and outright lies that willfully endanger Maria and the management and personnel of the network that government shut down.”

NTF-ELCAC also accused Rappler CEO Maria Ressa of spreading “faking news” over her interview with ABC News where she mistakenly said that ABS-CBN has 11 million workers instead of 11,000.

Ressa has since apologized and explained that she was thinking ahead of the next number she mentioned – the market cap “which was in hundreds of millions of dollars.” “That error has been used by very nice Filipinos to call me ugly, incite to hate, and to attack Rappler. The error was all mine,” Ressa added.

“The only reason we can think of why a government entity tasked to combat the communist insurgency would wage a propaganda offensive against media persons and outfits is if government now considers us the enemy,” the statement added.

The posts have since been taken down.

The statement also pointed out how the Presidential Communications Operations Office (PCOO) has “aided in the slander” by sharing and amplifying the erroneous post in their own official Facebook page that has 1.7 million followers.

The PCOO is supposed to be at the helm of the Presidential Task Force on Media Security, a task force mandated to ensure the safety of journalists in the country.

In a statement, PCOO secretary Martin Andanar claimed that the post was shared “without the usual vetting process of our office.”

“That being said, the posted content is not in any way an official statement or an opinion of the PCOO. The issue regarding ABS-CBN Corporation’s network franchise remains within the purview of Congress,” Andanar added.

Sec @martinandanar, why are PCOO social media pages being used to spread fake news on the ABS-CBN franchise issue? pic.twitter.com/tmbylWHkfK

The statement also pointed out how Andanar failed to “apologize for his agency’s involvement” and “promise an investigation to identify those responsible for this reprehensibly irresponsible action.”

Following public backlash, Andanar announced on Monday, May 12, that it is limiting cross-posting on the PCOO page. He added that they “will uphold accountability on matters like this in order to minimize such unfortunate  instances from happening again in the future.”

In the statement, journalists, media groups, and academic urged the government, including the Armed Forces of the Philippines (AFP), to “immediately mount an investigation into who in the NTF-ELCAC were responsible for ordering and creating the slanderous posts and why.”

“At a time when our people are battling a deadly pandemic, it is extremely unacceptable that there are those in government who are making media repression, not saving lives, as the priority,” it added.

More than 80 individual journalists and 30 organizations signed the statement.  – Rappler.com