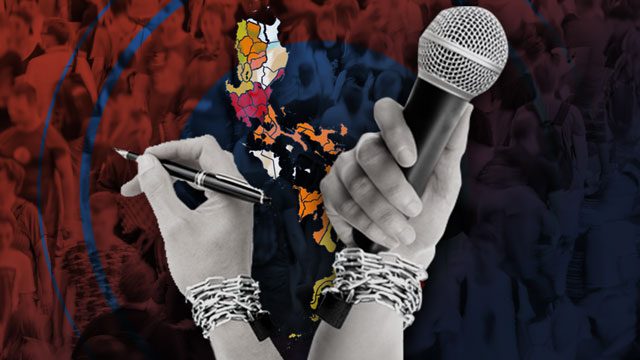 Facebook Twitter Copy URL
Copied
A barangay kagawad makes threats to correspondent Joanna Rose Aglibot and her family, prompting the National Union of Journalists of the Philippines to issue an alert

ZAMBALES, Philippines —The National Union of Journalists of the Philippines (NUJP) has issued an alert after one of its members was verbally attacked by a village official in San Antonio town early this week.

Philippine Daily Inquirer correspondent Joanna Rose Aglibot, who is based in Zambales, has lodged a police blotter entry against Barangay San Miguel Kagawad Siegfred Gonzales who reportedly harassed the lady journalist and her family on May 26.

In her incident report, Aglibot said Gonzales, who lived across her house, pointed a flashlight towards her mother who was in their garden at around 10 pm on May 26.

Upon witnessing this, Aglibot took her phone out and started recording the incident on video.

Aglibot’s father then confronted Gonzales, telling him to stop harassing them.

“But Gonzales was later joined by his mother who also shouted and hurled insults at the Aglibots. The barangay official also pointed his flashlight at Ms Aglibot several times, hurting her eyes,” the NUJP said in a statement.

Aglibot said it was still unclear what triggered the harassment by Gonzales and his mother.

“But Ms Aglibot has been reporting on how local officials respond to the COVID-19 pandemic and had earlier earned the ire of village officials when she wrote about some households receiving allegedly tainted rice during the village’s relief operation,” the NUJP said. (READ: Press freedom takes a hit in PH during coronavirus pandemic)

Aglibot said she would also file a complaint with the Department of the Interior and Local Government against the barangay official.

NUJP is among the lead proponents of press freedom and protection of journalists in the country. – Rappler.com