Filipinos in UAE band together to weather coronavirus pandemic 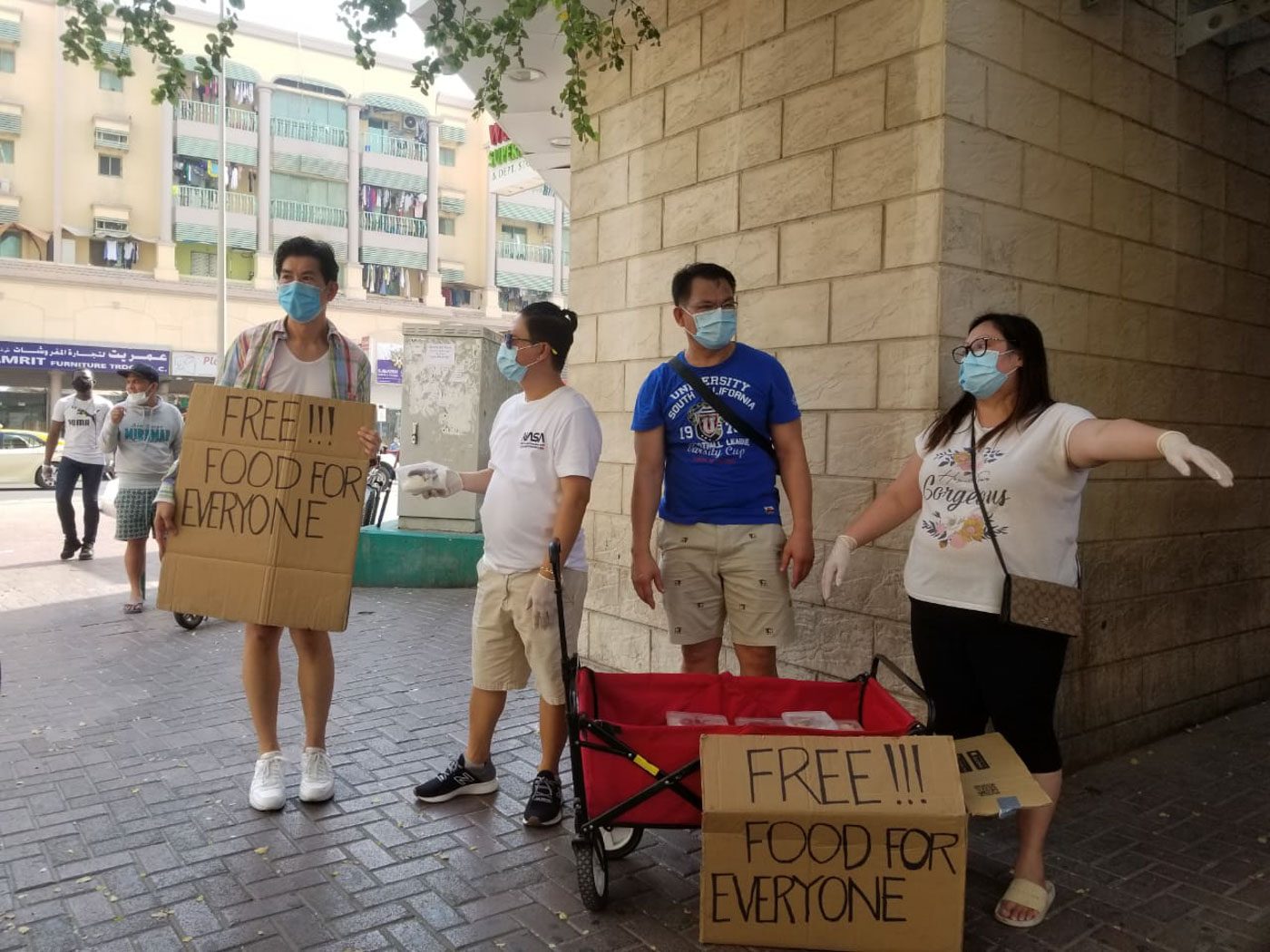 While some have lost jobs, others, like those in the hospitality sector, have been on a “no work, no pay” setup for the past 3 months since hotels halted operations following the suspension of flights on March 23.

Still others have been faced with salary deductions as per provisions of the United Arab Emirates (UAE) Minister of Human Resources and Emiratisation’s Ministerial Resolution No. 279 of 2020, which was issued on March 26 and allowed companies to do this in the face of COVID-19 precautionary measures.

Now, as the UAE economy begins to open up, individual humanitarian efforts have started multiplying among OFWs, who noted that it might still take a while before businesses regain steam and normalization sets in.

Arnel Fernandez, a sales support executive who has been in Dubai for the past 21 years, said the current situation is unprecedented.

“Ito ang worst (This is the worst),” the 47-year-old said. “Mayroon nang tulungan dati pa, pero ‘di ganito (We’ve helped each other even before, but not like this),” he added.

Fernandez regularly drives around Dubai, his car loaded with grocery or packed hot meals. He would pick a spot and then announce on his Facebook account where he is, so that people in the area could rendezvous with him for the deliveries.

Weeks ago, he used an entire month’s rent payment for relief groceries he gave out for free.

(I’ve never stopped going around, going live on Facebook to inform them I’m giving out groceries. I don’t know why I’m doing this. I just know I want to help somehow so that no one goes hungry and our fellow Filipinos at least won’t have to think about their food. I’m happy with what I’m doing.)

He said he will continue with his support drive so long as he is healthy. 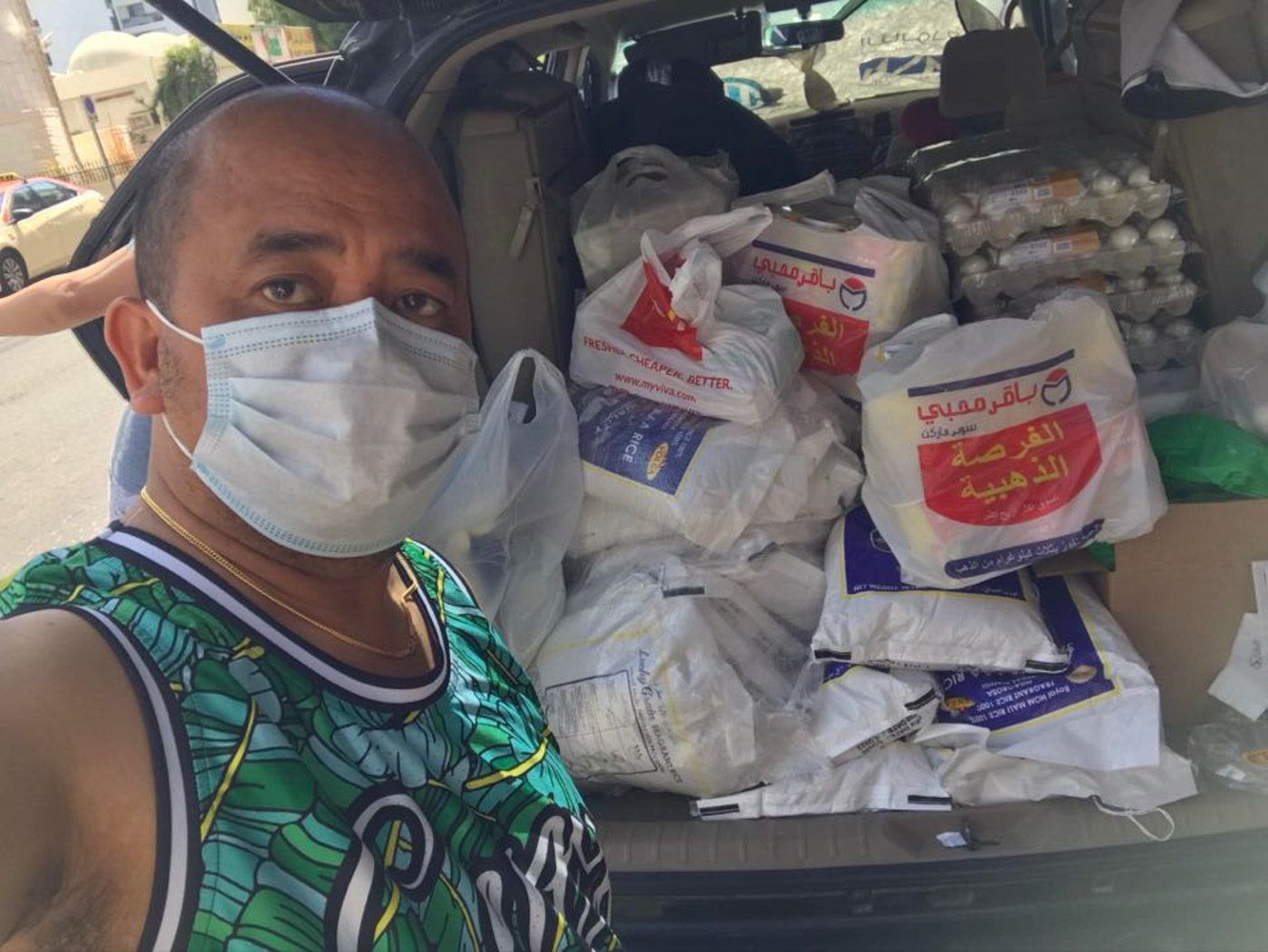 Feby Cachero Baguisa dela Peña, 34, has been jobless since 2017. She who used to be an office coordinator and hygiene manager at a gelato company.

These days, she can be seen in Muraqqabat, Deira, which is north of Dubai, handing out hot meals – usually Pinoy comfort food like adobo.

She started giving free food during the recent Eid’l Fitr, which marked the conclusion of the month-long Ramadan.

She routinely goes to bed at around 3 am after preparing the ingredients for the next day’s meal. She gets up at 8 am to cook, finishes at around 2:30 pm, and is usually at her spot along Muraqqabat just outside her place by 3 pm.

By 4:30 pm, she and her team are done giving away the day’s hot meal. She goes home, gets some rest, and repeats the cycle.

It would usually be some 30 kilos of chicken, 150 boiled or fried eggs, and 25 kilos of rice mostly donated by fellow Filipinos who have gotten word of her good deeds.

Around 170 OFWs queue for the free meals every day, Dela Peña said.

(How can we stop helping? During this time, this is what others rely on to not go hungry. A woman earlier cried in front of me while I was talking to her. You know, I want nothing else but to ease your burden. I hope we can make you happy even with a simple meal. Let’s keep fighting.)

Rex Venard Bacarra, Dean of General Education at the American College of Dubai, is also among the growing number of OFWs engaged in humanitarian missions for their fellow OFWs like it’s the “new normal.”

“Ang daming nangangailangan (So many are in need),” he said.

“What I usually do is look at the comments section of different Filipino pages. Then if I see someone is really is in need, I message [them] and offer assistance,” said Bacarra, who once bartered his Louis Vuitton monogram iPad cover for two small grocery bags of Filipino food for donation.

“It has to be done. Especially here in the UAE. Generally, Pinoys come here to provide for their families, kaya mas mataas ang chance to be depressed. Wala ka na ngang maipadala, wala pang work (so the chance of being depressed is greater. They can no longer provide for their families back home, they can’t even work),” the university professor said.

The Louis Vuitton monogram iPad deal was consummated through a Facebook barter page – the Amicable Barter Community in Dubai (ABCD), recently opened by Lou Olvido Parroco, herself an OFW who now works as a life coach;  along with husband, Cesar, a digital marketing and training manager.

The concept is simple: Post a picture of an item and indicate what you want to barter them for. But a lot of OFWs have gone a notch higher and used it as a platform for their humanitarian cause. And so, one would regularly see posts of pre-loved items being bartered for groceries for the jobless.

Among the hundreds of OFWs who got grocery supplies through the ABCD barter club is Marie Bernadette Jacobo Ortiguerra, a hotel marketing manager who lives with her husband, also a hotelier, and their children in Dubai.

Her husband, she said, has been getting just half of his basic salary.

She was able to barter pre-loved items for milk and diapers for her youngest child who is 4. In other parts of the city, a group of tenpin bowlers formed Team #ayudanatics to collectively seek donations and distribute them, first to their bowler friends and staff at the bowling center, and on to other distressed OFWs.

It all started with Albert Alba, a public relations professional who bartered his aquarium for 8 bags of 5-kilo rice, trays of eggs, and 8 frozen chicken thighs at ABCD because at the time, he had 8 distressed OFWs on his list.

“From the proceeds ng barter, marami ding nag-message, so nagdagdag na rin ako from my own pocket. Hangga’t may nangangailangan at may sources pa rin naman na maitutulong, tuloy lang. When I say sources, I mean either from future barters, donations from friends or, kung kaya, kaunting sariling purchase din,” Alba said.

(From the proceeds of the barter, a lot also messaged, so I also add from my own pocket. I’ll continue as long as someone is in need and I still have sources in order to help out. When I say sources, I mean either from future barters, donations from friends, or if possible, my own purchases.)

In Abu Dhabi, school nurse Mary Margarete “Em” Serrano – who has been without a job since the first week of March when schools closed – has embarked on her own little way of helping displaced OFWs by acting as the middle person doing the legwork between donors and beneficiaries.

Surviving on her savings, Serrano awaits a call from the government-run Abu Dhabi Health Services Company or SEHA – the English phonetic pronunciation and translation of the Arabic word for “health” – for her to do hospital duty. (READ: Overseas warriors: Up close with UAE’s Filipino nurses during the pandemic)

A vlogger, Serrano started her advocacy work also in March.

(When I came out with my vlog on free meals, more Filipinos asked me for help through my page and personal account. Every day I look for sponsors so I can help my fellow Filipinos. Especially those who have babies.)

She doesn’t run out of donors, which enables her to branch out to distressed OFWs in neighboring Dubai and even as far as Sharjah, which is about a 3-hour drive from Abu Dhabi.

(I won’t be able to sleep at night knowing there are babies out there who don’t have milk, or fellow Filipinos who have not eaten for days. I do this to help our fellow Filipinos because I know how it is to have nothing. And in this time, we need to help each other.)

Also in Abu Dhabi is Laliebeth Petancio, an OFW spearheading Tawid-COVID, composed of a group of volunteers collecting donations from fellow Filipinos and repacking them into individual packages, as well as preparing hot meals usually for as many as 300 people for regular distribution on weekends.

“Mga sariling bulsa po galing ang mga pinamimigay namin. Kadalasan nagiging role ko ay mag-grocery, mag-packing at distribute na din (We use our own money to buy goods. Usually my role is to buy the groceries, pack them, and distribute),” she said.

As of this posting, Tawid-COVID was already on its fourth wave of handing out free groceries and food.

Petancio said approximately 3,000 distressed OFWs in Abu Dhabi have benefited from their food and grocery drive.

“I am just amazed that a lot out there can really respond even if you don’t ask them for help, and most of all, for the trust that I have gained from them (donors). Nakakamangha naman (It’s amazing),” Petancio said.

Meanwhile, One Carlo Diaz, who works at Dubai Media City, said reaching out to those in need is a way of telling them not to give up.

“I saw that many Filipinos have been asking for help because they have lost their jobs due to the pandemic, and have since not gotten any source of stable income to sustain themselves,” said Diaz, who at 23 has also been doing his share of distributing free food.

“I believe that the immediate relief food packs I give can really go a long way. It’s a simple gesture that I hope would remind people to never give up, especially as we all struggle to overcome the pandemic away from our families,” he added.

In Ajman, a neighboring emirate of Dubai’s in the north, another group of OFWs banding together under the Kalayaan 2020 umbrella group has also been doing the rounds of free food distribution among distressed OFWs.

Zoren Yutuc Ico said their group has around 400 members and has given out food and groceries to some 750 beneficiaries, including people of other nationalities.

Kalayaan 2020 is organizing this year’s Philippine Independence Day celebrations and is based in Dubai, where members have also been engaged in food relief efforts for distressed OFWs, over 3,000 of whom have signed up as recipients.

According to Philippine Labor Secretary Silvestre Bello III, there are 400,000 documented OFWs in Dubai. Across the UAE, officials estimate that there are approximately 750,000. – Rappler.com