WATCH: The killing of 4 soldiers in Sulu – what happened before and after 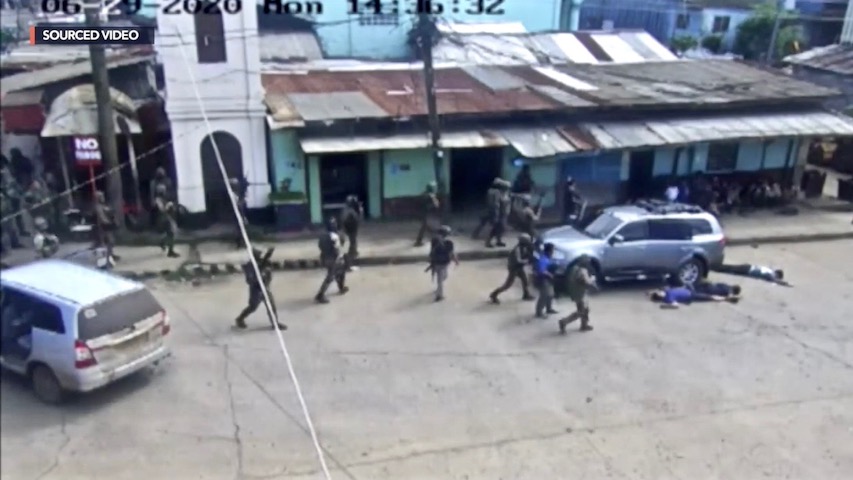 MANILA, Philippines – Army soldiers took over the crime scene where 4 of its intelligence officers and men were killed by policemen in Jolo, Sulu, on Monday afternoon, June 29, CCTV clips seen by Rappler showed.

Rappler obtained 7 video clips that run for a total of 20 minutes – capturing the moments after policemen flagged down soldiers in their SUV up to when their bodies lay dead on a street and to the time Army troops rushed to the crime scene to check on their dead, round up witnesses, and recover items from the victims and their vehicle.

These are the same clips that were presented to Philippine National Police (PNP) chief General Archie Gamboa when he was briefed on the incident by Bangsamoro region cops. Rappler learned the PNP will show the same clips to President Rodrigo Duterte – in the event of a meeting.

All taken in the afternoon of the killing, the CCTV footage however does not show the actual shooting.

What we saw were the final moments of the soldiers before they were gunned down and the minutes after, showing Army troops taking over the crime scene and getting items, such as a rifle, while policemen watched.

At a police checkpoint, at least 9 Sulu cops accost 4 Army men aboard a Montero SUV in Barangay Bus-Bus, Jolo, instructing them to come with them to the Jolo Municipal Police Station.

The policemen were later identified as:

The soldiers, all members of the Army’s 9th Intelligence Service Unit, are:

In a text message to Rappler, Joint Task Force Sulu Commander Major General Corleto Vinluan Jr said the 4 had been assigned to Sulu since 2019, except for Managuelod who was assigned this year.

An intelligence officer based in Sulu said Indammog, Velasco, and Asula were already in Jolo during the January 2019 suicide bombing of the town’s Catholic cathedral by an Indonesian couple linked to the Abu Sayyaf. Asula was a native of Sulu.

The police mobile of the 9 cops stops in front of the Jolo police station located in the commercial area of the town. Two cops get off but return to their seats within seconds after they realize that the SUV driven by the soldiers drove past the station.

A CCTV that faced the road caught the SUV going past the police station and beyond the camera’s coverage. The police mobile is seen following it.

The police car then parks just at the edge of the CCTV camera’s scope.

According to Bangsamoro police chief Brigadier General Manuel Abu, the soldiers are also forced to park, after they are stopped by a policeman.

The armed cops aboard the police vehicle appear to wait for around 20 seconds before they get off and walk toward the Army men. The CCTV that we obtained fails to capture what happened after, because the camera panned just to where the police vehicle was parked.

According to Abu, the shooting occurred at this point.

What happened beyond what the camera captured is the biggest puzzle for the National Bureau of Investigation, which has been entrusted to lead an impartial probe.

The police said the military threatened to shoot them so they fired back.

The same cops are seen in the footage once again, but they do not board the police car. They inspect the surrounding area.

The police car makes a u-turn and parks in front of the police station. And then the cops begin restricting traffic into the area, shooing away vehicles and people.

A CCTV camera further ahead captures a team of armed men in fatigues at the rotonda near the crime scene.

The camera then pans to the crime scene itself – showing it for the first time since the shooting.

The SUV’s right front door and left passenger door are swung open. At the left side of the car lay two dead bodies: a Velasco lying face down, and a supine Asula.

Behind the car, also lying face down, was Indammog. On his left was a black rifle. (The Army earlier said Indammog was unarmed when he left the SUV to speak to the policemen.)

There are no cops seen in the area. A few private vehicles and civilians are still seen spotted passing by and looking at the crime scene.

Two armed men in plainclothes and bulletproof vests walk into the crime scene. One of them kicks open a pair of doors in a modest commercial structure beside the SUV. General Abu told Rappler they were Army soldiers.

A third and fourth man get in and out the coffee shops. As they do so, the camera pans slightly to the left, showing a parked silver Toyota Innova just a few meters ahead of the SUV.

The men in fatigues in front of the Innova are from the Jolo police, according to Abu.

They did not cordon off the crime scene, he said, because the men who were taking over were from the military and the police did not want to trigger retaliation.

2:34 pm
Some 4 civilians from one of the “coffee shops” scamper away from the scene.

Seconds later, a number of civilians walk out from another shop with hands raised. They appear to have been ordered to sit on the ground outside as soldiers inspected the area.

One of the armed men who gathered the civilians walks to the crime scene, skipping over the dead. He is wearing a black shirt, black shorts, and a black hat.

He opens the left passenger door and reaches into the car for 3 seconds. He does not appear to have gotten any object inside.

Another armed man, wearing a shirt and jeans, picks up the rifle beside Indammog.

The armed men are also seen reaching into the car from the right front door.

According to Abu, the men were reinforcements called by the military. Army spokesperson Colonel Ramon Zagala said the troops rushed to the scene to check if anyone survived and secure equipment.

Afraid of escalation, the cops continued to stay by their corner in front of the Innova.

A man wearing a grey cap, black shirt, grey pants, and a sling bag approaches the body of Asula, and appears to close his eyes. The Army has identified him as his brother, who is also an Army operative. (Following Muslim tradition, Asula was buried right away and was not autopsied by the NBI.)

2:39 pm
Another man in a black hoodie and jeans wearing a cap does the same and presses down on Asula’s closed eyes. Asula’s brother walks near the body and, one more time, presses his eyes shut.

The CCTV pans to its left showing the rotonda occupied by around a dozen uniformed men.

These troopers, Abu said, were cops who came to the scene with Sulu police officer-in-charge Colonel Michael Bawayan. Even with backup, however, the policemen still kept their distance from the soldiers in the crime scene.

When the CCTV pans back to the crime scene, Asula’s brother is seen crouching over the body that he touched, pulling an object from the body’s right pocket. He hands the object over to the man in a black hoodie.

An armed policeman wearing fatigues and a bucket hat appears to try to stop them and is seen pointing at them through the CCTV. The two men do not stop, and the cop just walks away.

The brother then lifts Asula’s head and places a black shirt below it before putting him down.

The same two men open the driver seat’s door. Asula’s brother reaches inside the car. It is unclear whether he obtained an object. He then looks into his sling bag.

2:42 pm
Asula’s brother reaches again into the driver seat’s door, this time for around 13 seconds, and appears to have taken another object from the car.

As he does this, two armed and uniformed cops stand together just behind him, watching. They eventually walk away. 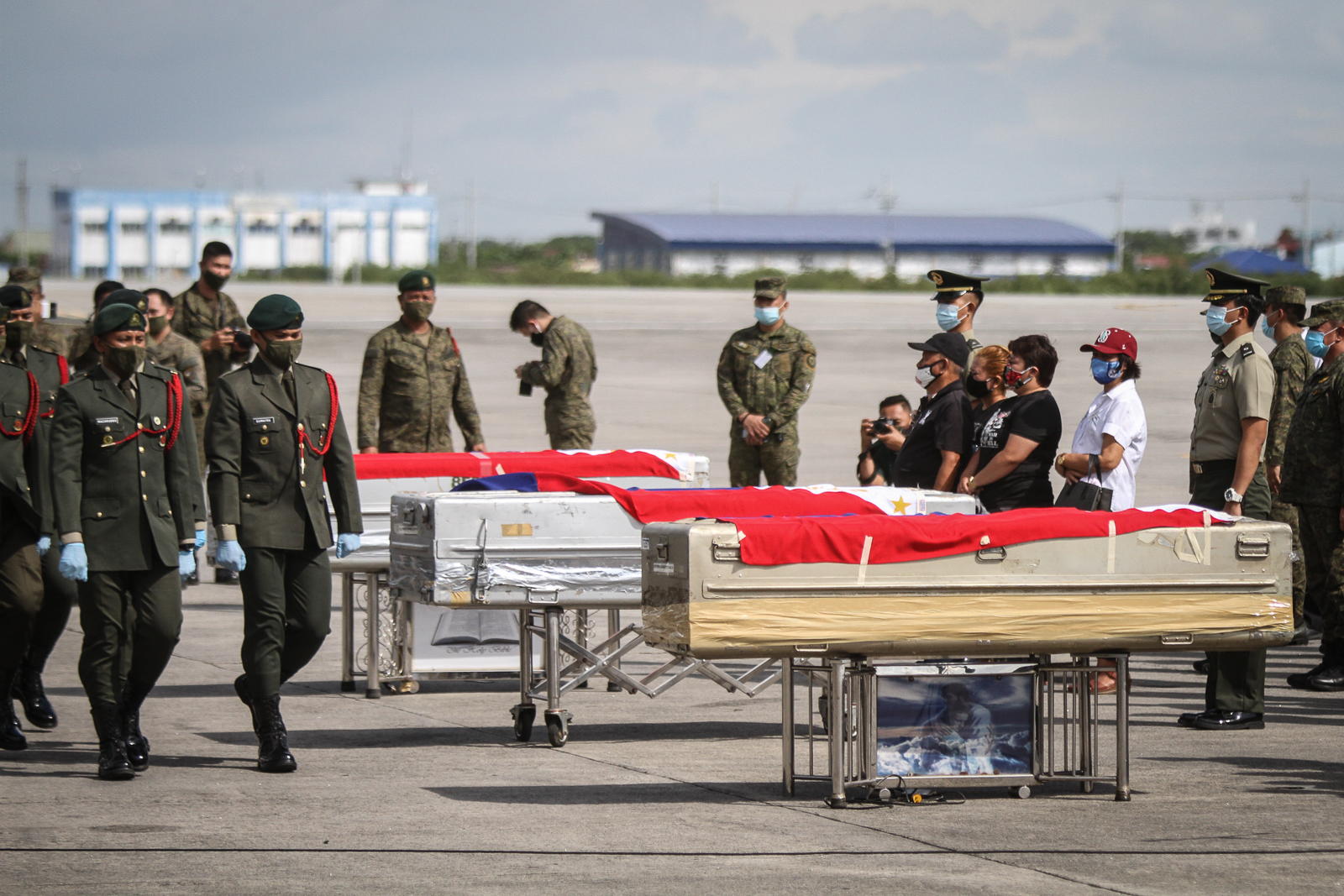 What happened after?
The 9 cops were disarmed and detained under the Sulu Provincial Police Office as the NBI began its investigation. The Jolo police chief was also sacked.

The bodies of the soldiers were taken under the custody of the military and, except for Asula, flown to Manila for examination and for their memorials.

The CCTV clips both clarify and complicate an already contentious narrative that has divided the police and the military.

While the clips do not show the actual shooting of the soldiers, they indicate no firefight. The police also did not report a gunfight.

In a radio interview on Thursday, July 2, Colonel Zagala said the soldiers had no intention to tamper with the crime scene. “The only intent there is to ascertain identities, to check if there are survivors because they just arrived. There is no intent to tamper,” he said.

As of July 2, the initial findings of the NBI have been transmitted to both Interior Secretary Eduardo Año and Defense Secretary Delfin Lorenzana, who have been updating President Duterte. – with reports from JC Gotinga/Rappler.com