Jul 3, 2020 7:35 PM PHT
Sofia Tomacruz
Facebook Twitter Copy URL
Copied
In a rare video message, Foreign Secretary Teodoro Locsin Jr delivers the threat himself: 'Should the exercises spill over to Philippine territory...it will be met with the severest response, diplomatic and whatever else is appropriate' 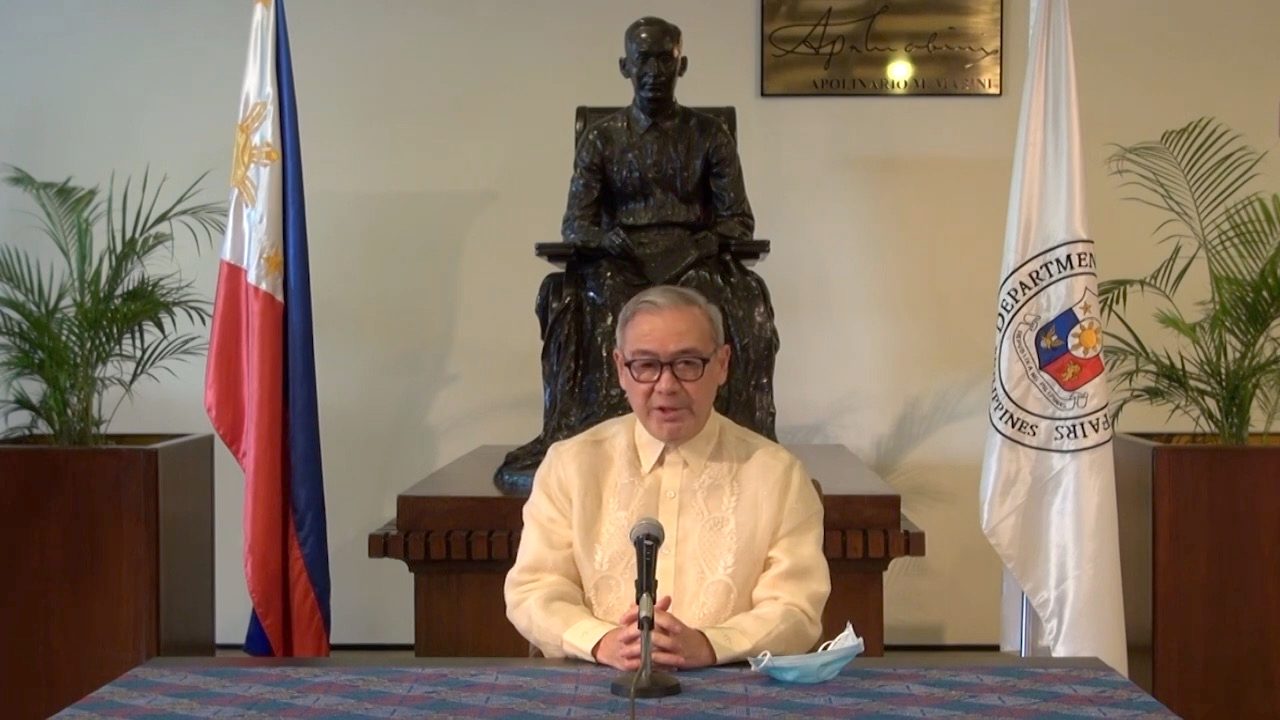 MANILA, Philippines – Philippine Foreign Secretary Teodoro Locsin Jr issued on Friday, July 3, a stern warning against China to back off from conducting military drills in Philippine territory, issuing a threat that doing so will be met with the “severest response.”

Framed beside the Philippine flag, Locsin delivered the warning himself in a rare video message that underscored the Philippines’ “interest and concern” over reports that China’s People’s Liberation Army Navy was conducting military drills in the Paracel Islands until July 5.

Locsin, who noted the exercises were taking place in the Paracels over which Vietnam claimed sovereignty, said that if the Chinese Navy stuck to its coordinates it would not impinge on Philippine territory.

Yet, the top diplomat warned: “Should the exercises spill over to Philippine territory then China is forewarned that it will be met with the severest response, diplomatic and whatever else is appropriate.”

During the period of exercises, China had announced no vessel will be allowed to navigate in the area and that all ships will have to “follow the guidance of the commanding Chinese ship on the site.”

Locsin said China, like other countries, was allowed to invoke freedom of navigation rights in its military exercises, “But that freedom, it bears reminding, requires a straight and uninterrupted voyage.”

Locsin was referring to naval practice where innocent passage of vessels should be done the shortest way through. Otherwise, a deviation from this would no longer be considered innocent passage.

“At a time like this, one would think that simulated military exercises would be more in keeping with the spirit of friendly cooperation that China has encouraged everyone to take. On the practical side, there are the open seas. Unless again the purpose is to establish a perennial and unchallenged presence that may in time congeal into right,” he said.

A rare move. Locsin’s message is unprecedented in many ways.

The foreign affairs chief, after all, rarely issued recorded statements in the past. It was also uncommon for his predecessors, including former foreign secretary Albert Del Rosario, who helmed the department as the Philippines took China to court over its attempts to claim the West Philippine Sea as its territory. The Philippine won that case.

Locsin had likewise usually announced the filing of diplomatic protests through his Twitter account or through statements issued by the Department of Foreign Affairs.

In his message, Locsin also called out China’s earlier move to establish administrative districts in the South China Sea, one of which claimed the Kalayaan Island Group in the Spratly islands in the Philippines as part of its territory.

“This is the problem with playing fast and loose with historical narratives and historical names; they open themselves to error; unless the real purpose is to excuse unchallenged mistakes that may over time harden into rights,” he said.

The Philippines earlier protested China’s creation of administrative districts and naming of underwater features throughout the South China Sea.

Staying ‘realistic’: The message to China was spliced with Locsin noting Beijing was among the Philippines’ largest trading partners and that relations remained essential to responding and recovering from the coronavirus pandemic.

Calling for sobriety, Locsin then called on parties to refrain from conducting activities “that would complicate or escalate disputes and affect peace and stability especially in this pandemic.”

“I will end on what has become a trite but still true statement: We call on the erring parties to refrain from escalating tension and abide by the responsibilities under international law, notably UNCLOS,” he said, referring to the United Nations Convention on the Law of the Sea.

Beijing’s continued aggression during the pandemic had also prompted President Rodrigo Duterte to suspend his decision to terminate the Philippines’ Visiting Forces Agreement (VFA) with the US.

The VFA is considered a deterrent to China’s expansionist claims as it operationalizes the two countries’ Mutual Defense Treaty where both sides commit to defend one another in case of an attack. – Rappler.com