‘We will remember’: Netizens demand justice after rejection of ABS-CBN franchise 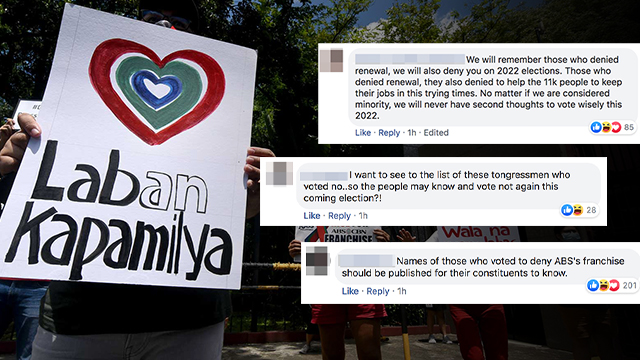 MANILA, Philippines – Netizens demanded accountability after an overwhelming majority of the House committee on legislative franchises voted on Friday, July 10, to reject the franchise application of ABS-CBN.

ABS-CBN is the country’s largest media network. The company enjoyed a 25-year franchise until the National Telecommunications Commission ordered it to halt broadcasting operations earlier in May.

With the decision, the network may be forced to lay off or terminate the services of several of its 11,000 workers. ABS-CBN could still appeal the decision within 24 hours. (Scenarios: What happens to ABS-CBN franchise after House panel vote?)

ABS-CBN, #NoToABSCBNFranchiseDenial, #IbalikAngABSCBN, and #WeAreOneKapamilya topped the country’s trending topics on Twitter shortly after the House committee handed down its verdict.

Netizens were already looking forward to a “day of reckoning,” demanding the names of the 70 congressmen who voted for the denial of the franchise. Netizens also reminded other Filipinos to vote wisely in the 2022 elections.

70 congressmen said yes. 70 congressmen killing the dreams of 11,000+ people working in the service of the filipino people. history has its eyes on you.

to those who voted #NoToABSCBNFranchiseDenial at sa lahat ng lumaban at nakiramay, maraming salamat po.

Social media users also sympathized with the 11,000 workers whose livelihoods were affected by the rejection of the network’s franchise.

Another sad day for the Philippines’ press freedom, shame to the 70 committee members who denied 11,071 Filipinos of jobs and denied 100 million Filipinos of unbiased news, entertainment and better economy.#IbalikAngABSCBN #WeAreOneKapamilya https://t.co/0fxf5DI11W

I may not be directly affected, or part of the 11,000 employees but, ABS-CBN did a big role to my childhood, And to who I am today.#NoToABSCBNShutDown#VoteYESforABSCBNFranchise #NoToABSCBNFranchiseDenial#WeAreOneKapamilya

Today Congress moved to deny ABS-CBN’s franchise, killing thousands of jobs and the hopes of the people. We must make a stand. #IbalikAngABSCBN #NOtoABSCBNFranchiseDenial

the government stripping away press freedom and thousands of jobs from the working class during a pandemic. all because their weak-willed fascist president can't handle criticism from the media https://t.co/kpjWr6NiYe

A handful of Filipinos also questioned if the rejection of the network’s franchise was an appropriate response to the current coronavirus crisis plaguing the nation. Others juxtaposed this with the recently signed anti-terror law.

Imagine in the midst of pandemic…the government prioritizes the shut down a network.

IN. THE. MIDST. OF. PANDEMIC#NOToABSCBNFranchiseDenial

What do you think of this development?  – Rappler.com