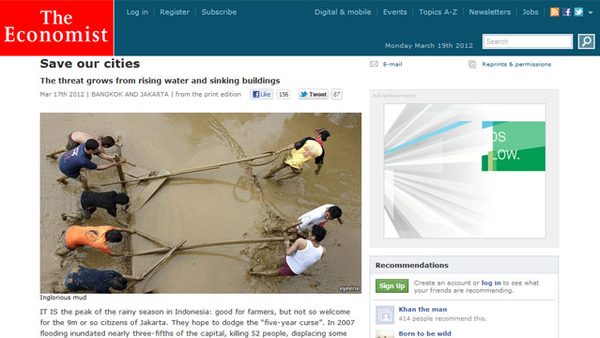 An Asian Development Bank (ADB) report said there is a link between expected climate change and migration. The Economist cited its key finding: In 2010-11 alone 42 million people in Asia were displaced by “extreme” weather. This is because the cities in Asia – Manila included – are hit by constant floods as waterways are clogged or because these places are sinking. A recent World Bank report says that land subsidence from compaction (from new skyscrapers, for instance) and increased groundwater extraction (for a growing population) mean that Indonesia’s Jakarta is sinking 10 times faster than the Java Sea is rising because of climate change. Thus, Manila’s effort to boost physical flood defenses will only go so far. Just as important is a willingness to limit or relocate urban and industrial expansion.

Read more from the Economist.