MANILA, Philippines – When are errors in the Statement of Assets, Liabilities and Net Worth a result of negligence and when do they constitute an impeachable offense?

After weeks of debate, Sen Miriam Defensor-Santiago wants to settle the issue once and for all. Santiago asked for a legal memorandum from both the defense and the prosecution panels to clarify their position on the matter.

Santiago sought the clarification on Monday, March 19, or Day 31 of the impeachment trial. She cited several Supreme Court cases to show the difference between dishonesty and simple negligence of the SALN filer.

“You have your work cut out for you. Prosecution, show that the SALN omission was intentional …. You have to show there was an intent to commit dishonesty.”

“To the defense, show that the Chief Justice declared all his bank deposits. If not, why not?”

The prosecution and the defense counsels said that they will comply with the order.

During her manifestation, Santiago said it is up to the impeachment court to decide what is the impeachable offense in the filing of the SALN.

“What constitutes an impeachable offense is a purely political question,” she said.

Santiago said that according to the implementing rules and regulations of the Code of Conduct and Ethical Standards for Public Officials and Employees, if a person makes a mistake in the SALN in “good faith,” the offense is not considered impeachable.

The senator-judge also cited the Supreme Court ruling in Presidential Anti-Graft Commission v. Pleyto. Santiago said the decision shows that the failure to completely fill out the SALN form was not dishonesty but “simple negligence.”

“The defense must prove that the failure to disclose the bank deposits is not done in bad faith,” she said.

Santiago also pointed out that the Civil Service Commission (CSC) recently issued new guidelines on filing the SALN. She said the new guidelines require the declaration of the acquisition cost of the properties.

She explained, however, that under the old guidelines of the CSC, it was not necessary to fill up all the blanks in the SALN.

In his SALNs from 2002 to 2010, Corona only filled up the fair market value and assessed value columns, and left blank the one for acquisition cost. The prosecution also accuses Corona of belatedly declaring some of his properties. (Read: Corona’s The Columns: Sold but not ‘accepted’)

In a press conference, defense counsel and spokesperson Rico Quicho said that the old CSC guidelines were vague.

“There was no clear-cut indicator on how to enter or fill up all the entries in the old SALN form. Now, there is a new SALN form proposed by the CSC. If they clarified the SALN, it means the old one was not clear so they had to make a new one to fix it and to avoid confusion and doubt,” Quicho said in a mix of English and Filipino.

“If it was not clear, what would be the punishment for leaving blanks in the SALN form? And can this still be corrected?”

Quicho said that in its legal memorandum, the defense team will show that errors in Corona’s SALN do not constitute an impeachable offense.

Quicho and another defense counsel-spokesperson, Tranquil Salvador III, said they will use the Pleyto case in their arguments.

“If we can prove that it (omission) was done in good faith, it’s only simple negligence,” said Salvador. 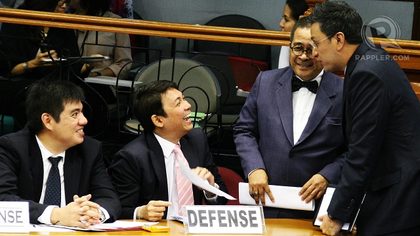 For the prosecution, the blanks in Corona’s SALN are not simple mistakes done in good faith.

Angara said that in the case of former Public Works and Highways Undersecretary Salvador Pleyto, he declared the business interests of his wife but failed to list the specific details of the businesses such as poultry, piggery, pawnshop and laundry business.

He said this was why the Supreme Court ruled that there was only simple negligence.

Angara also cited two other cases, Ombudsman v Racho and Flores v Montemayor. In these cases, he said two officials of the Bureau of Internal Revenue (BIR) were convicted of dishonesty and removed from office for failing to declare millions of pesos and properties.

Angara said one of the BIR officers was found guilty for failing to declare his vehicle for only one year.

“What more for CJ who did not declare for 5 years Bonifacio Ridge and the Columns, and the Bellagio for one year?”

Asked how the prosecution will prove that Corona intended to be dishonest, Angara said the intent can be inferred from his actions.

“The properties were not declared for several years but declared all of a sudden in 2010. The court can notice that it was declared when Ombudsman Merceditas Gutierrez was impeached. They can take judicial notice.”

Prosecution spokesperson Rep Romero “Miro” Quimbo also repeated his argument that if the Senate will side with the “good faith” line of the defense, this will trivialize the SALN.

“We will destroy the use of the SALN as an annual measure of whether the public officer is saying the truth or accumulating wealth.” – Rappler.com