Corona’s The Columns: Sold but not ‘accepted’

MANILA, Philippines – Is it Corona trial Day 10 all over again?

The issue comparing the acquisition of Chief Justice Renato Corona’s condominium unit in The Columns in Makati with the time the property was deemed accepted was rehashed on Monday, March 19.

“The title was transferred early on but there were outstanding issues [so much so] that Mrs. Corona could not settle the issue with the condo,” said Roy.

The Coronas bought the unit in 2004 but the Chief Justice only declared this in his 2010 SALN. The deed of sale was executed in 2004. (For documents on The Columns property, see Corona properties: The Columns.)

Roy presented letters from Corona’s wife, Cristina Corona, to The Columns management where she complained about having an “ordeal” with her unit.

In the letters, Mrs. Corona said the unit was turned into a storehouse, had debris from other units, stinky toilets, a messy kitchen, and faulty electrical wirings.

Lim said he had “no idea” of the complaints of Mrs Corona as he only assumed his post in 2010. 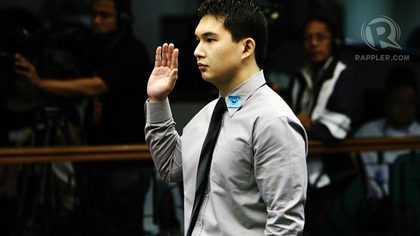 The issue was already tackled last February 1, or Day 10 of the impeachment trial. Ayala Land assistant vice president Nerissa Josef then testified that the Coronas fully paid for the unit in 2004 but it was only “deemed accepted” in 2008.

Back then, the defense already said the unit had problems such as leaks and unfinished windows. They said this justified the delayed acceptance of the unit.

Yet some senator-judges have pointed out that the defense used a different argument in the Marikina property, which was only declared in Corona’s 1992 SALN.

The defense said last week, when the Marikina property was tackled, that even if this property is still under the Coronas’ name in public records, it was already bought by Corona’s second cousin, Demetrio Vicente in 1990, based on a deed of sale.

Despite the past testimony on The Columns in February, senator-judges allowed the defense presentation to go on but asked clarificatory questions of Roy.

Sen Sergio Osmeña III asked Roy how the Coronas paid for the property.

The defense counsel said he was unsure. Roy said: “The only thing I have in my possession is the deed of absolute sale but I suspect that this was also…” Osmeña retorted: “No, don’t suspect. You’re supposed to know and I presume you’re not telling us the truth. Did he pay cash? I’m asking you, did he pay cash?”

Roy said he was not informed since the arrangement would have been between the Coronas and Ayala Land.
“You are blissfully ignorant,” Osmeña said as he ordered Roy to present to the court on Tuesday, March 20, the information on the payment scheme.

Senate President Juan Ponce Enrile asked Roy, “The only question is her (Mrs Corona) acceptance of the unit? And yet this was not included in the SALN of the Chief Justice [before 2010]?”

Enrile and Osmeña said that it does not matter when the unit was accepted by the Coronas. The two senator-judges said the property should have already been declared from 2004 onwards because “there is value.”

“It is totally irrelevant whether the Chief Justice accepted the unit or not. The value [of the property cannot be zero]. There’s falsification there,” said Osmeña.

Roy, however, maintained that the defects in the property led to the declaration of the unit only in 2010. He explained that the Coronas initially wanted to get their money back because of the defects.

Sen Panfilo Lacson asked him if there was any intent to hide the property before 2010. Roy replied, “No, because at that point, the issues were fixed.”

Lim testified that The Columns charged Mrs. Corona P112,213.79 in association dues and she paid P108,000. The P4,000 balance was waived after Mrs Corona wrote about the defects in the unit.

The prosecution was not convinced by the defense’s presentation and explanations.

“It’s nonsensical to pay association dues and say that the unit is not yet yours. It’s an afterthought. The excuse in the last witness is very flimsy. They (defense) are only covering up their failure to declare the property in the past years,” said prosecution spokesperson Rep Juan Edgardo “Sonny” Angara. 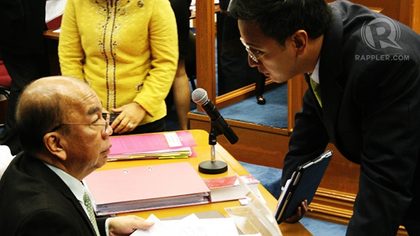 Another prosecution spokesperson Rep. Romero “Miro” Quimbo said that if the Coronas indeed wanted to have the title of The Columns cancelled, they should have declared the P4-M they used to pay for the property instead.

“They said they wanted the property cancelled. So where did the P4 million payment go? If you do not want to declare the condo unit, where is the P4 million? That is an asset,” said Quimbo.

Quimbo added, “So Senate President Enrile is right, the value cannot be zero. So you either declare in the 2004 SALN the cash advance or investment, or the property.” – Rappler.com