GMA won’t do mugshots ala Erap 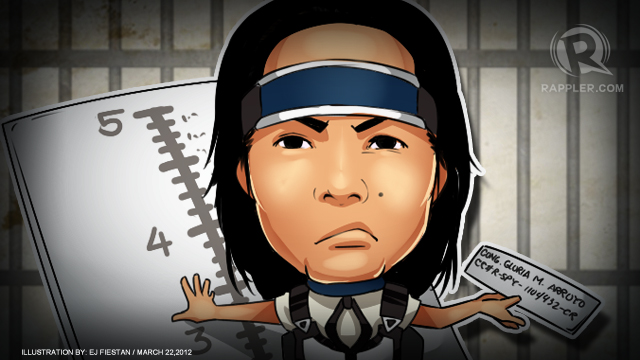 Former President Gloria Macapagal-Arroyo prefers to have her bail application processed at the presidential suite of the Veterans Memorial Medical Center (VMMC) where she is presently detained on a separate election sabotage charge. The Sandiganbayan Fourth Division yesterday granted Arroyo’s request that a court official be sent to the VMMC to process her bail. Otherwise, she would have had to go to the Sandiganbayan to post her P70,000 bail bond on criminal charges — just like what deposed President Joseph Estrada did in 2001. The prosecution did not object. Now serving a 3-year term as congresswoman of Pampanga, Arroyo was given 5 days to send her lawyers or a representative to post the required P70,000-bail bond on her behalf. Read details in Rappler.