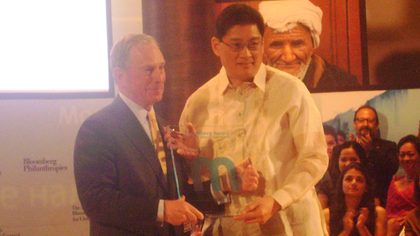 At least 55 smokers appeared to have deliberately positioned themselves in the no-no spots, as if daring the enforcers to apprehend them. Later, the MMDA found out, these smokers were planted by tobacco companies and given legal help against government agents. The intent: take government to court to hopefully stop the smoking ban.

But the MMDA was unafraid.

“With HealthJustice around, we knew that what we were doing was right and within the law,” said Dr Loida Alzona. The head of MMDA’s Health, Public Safety and Environmental Protection division was speaking in a video shown Thursday night here, at the 15th World Conference on Tobacco or Health.

This same night that philanthropist and New York City Mayor Michael Bloomberg announced giving US$220M more for the global work on eliminating tobacco use –bringing his total commitment to $600 million — he recognized HealthJustice Philippines for its contribution to the cause.

Particularly, Bloomberg honored the fairly young non-governmental group for monitoring the tobacco industry’s attempts to undermine laws and government policies that will reduce tobacco consumption in the Philippines.

HealthJustice, formed in 2008 by doctors, lawyers, and economists, provides government agencies and advocates with legal information and advice on how to counter these attempts.

The tobacco industry succeeded in getting a court order to stop the smoking ban in Mandaluyong, one of the 17 cities under MMDA’s jurisdiction, but the ban remains in the rest of the metropolitan area.

HealthJustice is not about to relax, however, as it advises other government agencies in 5 other cases filed by tobacco companies in different courts to skirt the advertising ban, prevent graphic health warnings on packs, and relax on no-smoking spots.

HealthJustice also regularly sends advisories to media organizations when tobacco companies are trying to get around the rules, or when government officials and agencies may be getting cozy with the industry, such as when then Sen Richard Gordon, as chair of the Red Cross, was photographed accepting a donation from Philip Morris, and when the Bureau of Internal Revenue publicized PM as one of the top corporate taxpayers.

If some sectors think HealthJustice is stretching things too far, the group will always get back to you with the Framework Convention on Tobacco Control (FCTC), which the Philippines signed with 173 other countries.

It requires signatory countries to pass laws that will reduce, and eventually eliminate, tobacco use.

These laws include those banning smoking, banning advertisements and promotions of tobacco products, requiring tobacco companies to put graphic health warnings on their products, and preventing government collaboration with the tobacco industry.

And HealthJustice is taking this convention seriously.

Its vision is for “Filipinos to be free from health risks that could be prevented through appropriate health policies,” and right now it has a lot more work to do.

Dr Ulysses Dorotheo of the Southeast Asia Tobacco Control Alliance said, “Before HealthJustice, there were no lawyers working in the tobacco control [front]” in the Philippines.

Dr Daniel Tan, who received the award on behalf of HealthJustice, said that “tobacco industry interference…is the single biggest threat to tobacco control and FCTC implementation,” that’s why they helped develop a government-wide policy that will shield agencies in the Philippines from tobacco industry influence or threats.

They have helped the MMDA, the Department of Education, the Land Transportation Regulatory Board, and a number of local government units across the Philippines in their various tobacco control efforts.

“We have seen this policy systematically denormalize the tobacco industry and redefine as ‘interference’ any tobacco industry actions and reactions to various tobacco control measures, including legal challenges in court and personal attacks on advocates,” Tan said. 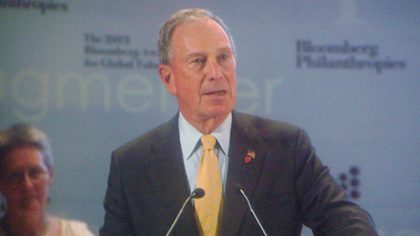 Bloomberg told the audience on Thursday: “Make no mistake, the tobacco industry is fighting back. They know the advocates are working hard. But, I’m telling you, we’re not going to lose.”

The Bloomberg Initiative to Reduce Tobacco Use is the world’s largest coordinated effort to reduce harm caused by tobacco globally. It supports efforts of governments and NGOs to increase tobacco taxes, educate media and citizens on the impacts of tobacco, to protect nonsmokers from second-hand smoke, and to help smokers quit. It also supports the monitoring of public policy.

The MMDA smoking ban program is, in fact, a recipient of a P9.5-M grant from the Bloomberg Initiative.

HealthJustice — as well as the 5 other awardees this year — will receive cash grants to implement their respective tobacco control plans.

Bloomberg, since he became mayor of New York in 2002, has implemented strict tobacco control laws. In 2007, he launched the Bloomberg Initiative, as part of the Bloomberg Philanthrophies, and has since supported tobacco control work in 38 countries, in effect protecting the lives of 2.2 billion people.

In the next 4 years, he said, an area of focus for his tobacco control initiative will be to make governments raise taxes on tobacco products, raise the prices of tobacco, and thus discourage people from buying them.

This, Bloomberg said, is “the single most effective way to reduce tobacco use.”

In the testimonial video for HealthJustice, Dorotheo said that “one life saved is enough reason” to do this kind of work. And since 84,000 Filipinos die every year of tobacco-related diseases, “that’s 84,000 reasons to go on.”

Bloomberg agrees. He assured the audience of tobacco control advocates: “This is a fight I will never go away from.” – Rappler.com