Mar 24, 2012 8:52 AM PHT
Miriam Grace A. Go
Facebook Twitter Copy URL
Copied
The ban has driven tobacco firms to subtle advertising by influencing the content of so-called free media such as news and movies SINGAPORE – The Philippine health department saw through the unbelievably numerous scenes depicting smoking in the movie, “Manila Kingpin: The Untold Story of Asiong Salonga.” It is, an agency official said Thursday, a form of indirect advertising and promotion of cigarettes, which is prohibited by law.

Earlier this week, select journalists from different countries were asking Matthew Myers, president of the US-based Campaign for Tobacco-Free Kids (CTFK), just that: Aren’t movies just depicting reality — that there are people who smoke — when they include such scenes?

Myers’ reply: Characters holding a cigarette or puffing it in a movie scene is “not reality” because majority of people are non-smokers. Including smoking in movie scenes therefore “misleads” the viewing public to think that it represents a habit of more people.

The recently launched Tobacco Atlas shows that only nearly 20% of the world’s adult population smokes cigarettes.

Besides, he said, “You don’t watch movies to see people smoke,” and so those smoking scenes are really unnecessary. There’s no other way to interpret those scenes but as indirect advertisement influenced by the tobacco industry.

The Tobacco Regulation Act of 2003 prohibits tobacco companies from placing advertisements in the paid media — TV, cable channels, radio, newspapers and magazines, cinemas, and billboards. The law doesn’t allow them to sponsor public events or hire celebrity endorsers. They cannot engage in any activities that promotes or displays their brands and logos, except inside the retail establishments where the cigarettes are sold.

The ban has since driven tobacco firms to subtle advertising by influencing the content of so-called free media such as news and movies. Newsbreak reported in 2009 that they have been providing “grants” to filmmakers to include smoking scenes in their movies, regardless of whether brands are shown.

“Manila Kingpin,” which starred Laguna Gov E.R. Ejercito, showed actors smoking in half of the movie — in 44 out of 91 scenes. Anthony Roda, acting chief of the government’s National Center for Health Promotion, noted that the film “is filled with tobacco and smoking scenes from the first 4 minutes of the movie up to the last few minutes towards the end. Smoking is also very obvious in the movie’s trailer, music video, print advertisement and poster.”

Roda said smoking scenes “send the wrong message to our children” and “entice people to crave for cigarettes.” 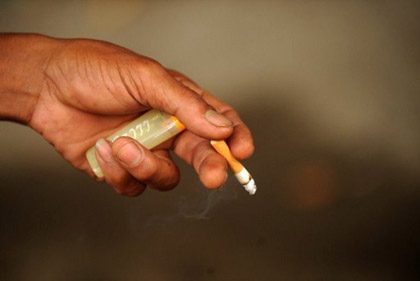 This was exactly Myers’ point. Movies make smoking look glamorous, especially to young people who are vulnerable to such subliminal messages.

Experts support this. In 2011, Simon Racicot of Concordia University in the US said, “Kids who see others smoking are more likely to take up the habit because they don’t perceive cigarettes as unhealthy.”

John Pierce of the University of California in San Diego found in a study in 2005 that, “If movie stars smoke, especially in romantic films, they are effectively encouraging young girls to smoke.”

Myers recalled that the Marlboro Man, the “worst US export,” was conceptualized after psychologists and advertising experts identified the vulnerability of young people — they were looking for an identity and found it fashionable to model the cowboys which they didn’t have in their countries.

As early as 1975, Philip Morris had said in confidential corporate documents that the best time to entice people to smoke is during their youth when “conformity to peer-group norms is greatest.” RJ Reynolds in 1998 said they should target the young because “younger adult smokers are the only source of replacement smokers.”

That is why, Myers said, the youth have to be protected from the tobacco industry’s marketing schemes. In 2008, Myers and CTFK became instrumental in pressuring Philip Morris to withdraw its sponsorship of 2 concerts in Southeast Asia, as this violated the advertising bans in those countries — the Eraserheads reunion concert in the Philippines, and R&B singer Alicia Keys’ show in Indonesia. – Rappler.com