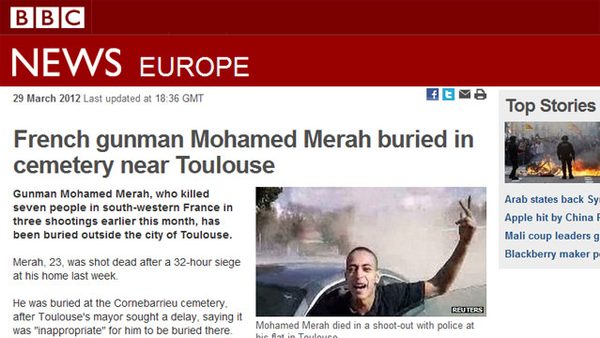 Islamist gunman Mohamed Merah was buried in his hometown Toulouse on Thursday, despite a protest by the French city’s mayor. Previously the 23-year-old serial killer’s homeland Algeria refused his corpse. The burial took place after President Nicolas Sarkozy waded into the debate over where the man who shot dead three Jewish children, a teacher and three soldiers should be buried after he himself was killed in a police raid. “He was French. Let him be buried and let’s not have any arguments about it,” Sarkozy was quoted as saying. Toulouse mayor Pierre Cohen called earlier for a last-minute delay to the burial, saying it was “inappropriate” for him to be buried in his hometown in southwestern France where he also carried out some of his killings. Merah killed 7 people, including 3 people in southwestern France before we was shot dead in a siege at his home. Details here.