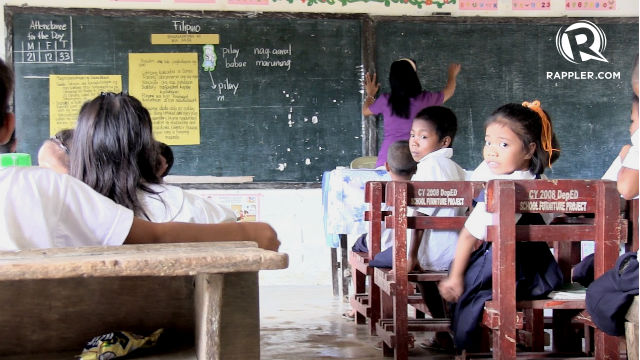 MANILA, Philippines – Here’s a reason for teachers to celebrate.

The Department of Education (DepEd) said Tuesday, July 16 it has already turned over to the Inter-Agency Task Force validated reports of 145 school divisions for the release of their 2012 performance-based bonus (PBB).

The department submitted the requirements of 76% or 145 out of the 191 school divisions last Friday, Assistant Secretary Jesus Mateo said.

This covers about 410,000 teachers in the country, all of whom may receive their PBB within the 4th week of July—more than a week after DepEd submitted the reports.

“We prioritized the teachers. Of course we’ll prioritize our teaching force since they compose the bulk of our manpower,” Mateo said in Filipino.

Mateo is also optimistic that the PBB will be released by next week. However, he was quick to add that it will be simultaneously distributed and not all at once due to procedural issues.

DepEd has yet to verify the data submitted by the remaining 46 divisions.

“Instead of releasing to the Central Office, our suggestion was for the Department of Budget and Management (DBM) to download the PBB immediately to the regional or divisional offices for quick processing,” he said, adding that the DBM agreed to this arrangement.

It took a year

A month ago, teachers’ group Teachers’ Dignity Coalition (TDC) called on the DBM to release the PBB of teachers.

This was after President Benigno Aquino III gave the employees of the Department of Public Works and Highways (DPWH) P10,000 each as the agency’s 115th Founding Anniversary bonus.

“The teachers are waiting for the performance bonus since December 2012, yet six months after, we heard nothing from the DBM and from the President himself. If that is for the fiscal year 2012, we should have received it by January or by April, if they use school year as basis,” TDC national chairperson Benjo Basas said in a statement.

It is a new system of incentives for government employees comprised of the PBB and the Productivity Enhancement Incentive (PEI).

Should the PBB be released to the teachers next week, it would already be more than a year after the signing of the EO.

“It’s just fitting to reward teachers who perform, because in the past, without the PBB, teachers tend not to perform. Unlike now, when you perform, you will be rewarded,” Mateo said.

Mateo explained that the incentives will only be released this year because the assessment period covered one school year or from June 2012 to March 2013.

Aside from that, the department had to carefully verify every record submitted by the schools—not an easy feat for a bureacracy with as large a scope as DepEd’s.

An individual’s PBB cannot be processed until the whole agency complies with 3 preconditions set by the Inter-Agency Task Force:

Mateo said DepEd does not rank an individual or compare the schools to one another in assessing their performance. Instead, they compare a school’s performance to its previous records.

Each school will be assessed based on different categories, and the teachers can receive a bonus ranging from P5,000 to P35,000. – Rappler.com