MANILA, Philippines – Will the President and the Vice President go separate ways in 2013?

The two camps said that they already have separate “long lists” for their senatorial slates, although they are not releasing the final names yet.

Both the Liberal Party (LP) of President Benigno Aquino III and the Partido Demokratiko Pilipino-Lakas ng Bayan (PDP-Laban) of Vice President Jejomar Binay could not complete a lineup from their members alone so they’ve opened up to possible coalitions.

Curiously, no effort has been made for the two political parties to coalesce.

PDP-Laban president Senator Aquilino “Koko” Pimentel III told Rappler that they are not wooing LP nor is LP wooing them.

“I am the party president. They are not talking to me. If they’re talking to the Vice President, I would know that, too,” said Pimentel, who is also running for re-election.

Binay is a longtime ally of the Aquinos. Binay originally planned to run in the 2010 presidential elections but withdrew his candidacy when then Senator Aquino decided to go for it.

The relationship between President Aquino and Binay got complicated during the campaign, however. President Aquino was caught in the bitter rivalry between Binay and defeated vice presidential bet Manuel Roxas II, the original LP standard bearer who also slid down for Aquino. Roxas is now Transportation and Communications Secretary. 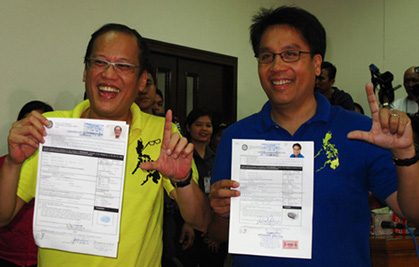 Coalition with LP ‘not important’

Both camps are not keen on a coalition in 2013, but they’re not ruling it out.

“It is not important [that we coalesce with LP]. As a political party, we must pursue our own plans. But is it beneficial and desirable? Yes,” Pimentel said.

“Our policy is to try as much as possible to complete the 12 slots, if we can. Failing to do so, which is a likely case, then we entertain the idea of coalescing with other parties or possibly individuals,” said Abad.

LP has clear parameters in choosing parties and candidates to coalesce with. “The senators are policy makers and the reason we’re helping our candidates get elected is to make sure we have support for our legislative agenda. So this will be the basis for coalescing,” said Abad.

This was also the message of President Aquino’s first campaign speech in vote-rich Cavite last week. He called for the election of his political allies to reduce, if not eliminate, opposition to his proposed reforms.

Statements from LP stalwarts suggest that they recognize this early the political hurdles that both camps face in the run-up to the 2013 senatorial and local polls.

“It’s difficult for LP to join their coalition when GMA (former President Gloria Macapagal-Arroyo) allies are there. It’s difficult to sleep with the enemy,” said LP stalwart Cavite Rep Jose Emilio Abaya. “We will welcome like-minded candidates,” he added.

UNA’s long list includes Zambales Rep Milagros “Mitos” Magsaysay, one of Mrs Arroyo’s staunchest defenders. “She is a performing congresswoman. Marunong manindigan. At gusto n’yang sumama sa amin. She is not pushing us away,” said Pimentel.

“What’s wrong with coalescing with a GMA ally as long as they don’t  have any crime against the nation,” Pimentel added.

LP should not be “purist,” said Pimentel. “Let’s review their ranks. How many of them were once upon a time GMA allies.”

Pimentel gave assurances UNA is not dominated by GMA allies. “I will leave the group if that happens,” he said.

Abad said they are not ready to release LP’s list. “There is one but I am not at liberty to reveal their names to insulate them from any possible pressure. There is a list but not short,” Abad told Rappler.

He acknowledged though that they have to finalize the list “ASAP.”

But it was a special case because Arroyo assumed office in 2001. The 2007 polls was practically her second midterm elections.

On the other hand, Binay’s 2016 presidential plan is an open secret, and he has been building his political party for that run.

In the recent Pulse Asia survey, Binay had the highest approval rating among the country’s top national officials. He got 84% approval rating, which was higher than President Aquino’s 70%.– Rappler.com