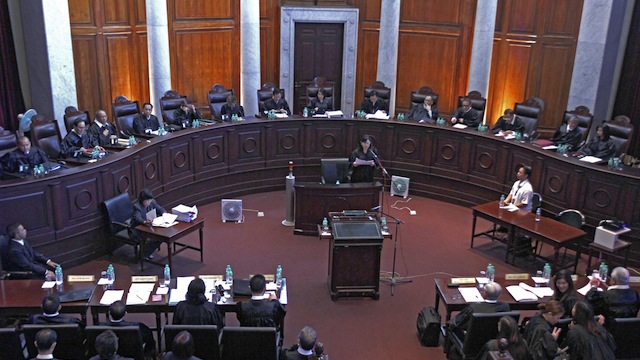 “Tuwid na daan is a path that will lead you to something promising. If you are imposing a contraceptive mentality, it will not only affect this generation but future generations to come,” Liban told the court.

President Benigno Aquino III, in his State of the Nation Address (SONA) on Monday, July 22, praised the passage of the RH law last December as an example of “transformation in government.”

“We persevered through the long process of debate and consultation; we were not cowed by those who tried to sow doubt in the attempt to obstruct our meaningful agenda. We have fought for what benefits the people, and we are advancing true public service for the Filipino,” Aquino said in his SONA.

Before Brion’s question, Liban was arguing that implementing the RH law means allowing the Philippines to be “assaulted by Western-sponsored culture not suitable to our culture.”

Brion asked: If the present generation of adolescents are fully exposed to RH law, what culture does it encourage?

Liban answered: “We already have a picture. A picture of the US. According to studies, young people as young as 12, 14, and 19 engage in multiple sex partners.”

Liban said the Philippine culture is “old-fashioned,” which is not bad. It means “good values and that is good.”

RH law, Liban continued, ushers in a “modern culture.” He said: “I think that is not the way to go for us.”

Brion asked further: “Is promiscuity a part of our culture?”

Liban answered: “No, your honor. It’s a great sin.”

During his turn, SC Justice Marvic Leonen followed up on this line of questioning.

He asked Liban if it is the responsibility of the court to check how many sexual partners people have.