More relatives in the Senate come 2013?

Apr 11, 2012 6:47 AM PHT
Facebook Twitter Copy URL
Copied
The Ejercitos, Enriles, Cayetanos and Revillas may sit at the Senate at the same time

MANILA, Philippines – It’s often said that all politics is local. For senatorial races, another conventional wisdom holds true: it’s all in the family.

Aside from siblings Alan Peter and Pia Cayetano, more relatives may end up in the Senate by 2013 based on the current crop of potential candidates.

San Juan Rep Joseph Victor “JV” Ejercito confirmed that he is seriously considering running for the Senate in 2013. He made the statement in an interview on ANC Tuesday, April 10.

Currently in the so-called magic 12 of surveys, Ejercito may land a Senate seat alongside his brother, Sen Jinggoy Estrada, whose term ends in 2016. The two are sons of former President Joseph Estrada, who was also a senator.

Another 5th placer in the survey is re-electionist Sen Alan Peter Cayetano. If he wins a second term, he will still be senator alongside his sister.

If Cavite Rep Lani Mercado-Revilla decides to run for the Senate and wins, she will be with husband Sen Ramon “Bong” Revilla Jr.

Other political families want to keep Senate seats within their clans. While the terms of Senators Manny Villar and Edgardo Angara are ending next year, their family members are reportedly vying to replace them.

In the past, relatives have also occupied Senate seats at the same time like Estrada and mother Luisa “Loi” Ejercito Estrada. 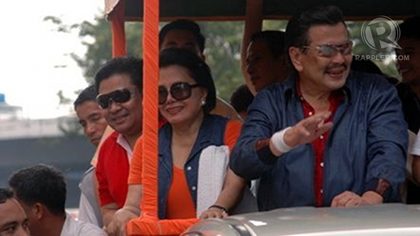 Pulse Asia President Ronald Holmes told ANC’s Lynda Jumilla that looking at elections over the years, voters do not find it problematic to have senators coming from the same family. The Senate has only 24 seats.

Holmes explained that if a candidate’s family is perceived to have a positive contribution to politics, this may work well for him or her.

“I don’t think there was any disagreement or people were opposed to the idea of voting for relatives vying for different electoral posts, local or national level,” said Holmes.

“I think it’s already an accepted fact,” Tañada said in the same ANC interview. “I think the country will have to really decide. It’s such a small institution but as Ronnie (Holmes) said, I think it’s accepted.”

Holmes stressed though that family name does not guarantee victory. He said candidates must be known for their stand and proposals on an issue. “In the previous elections, you’re looking at a much more catchall message. You’re appealing to a median voter, voters who do not necessarily focus on one issue but vote for candidates that have a brand or carry a name that’s associated with an institution that I don’t think they completely understand also.”

Holmes added, “You have an issue, it’s something you have a track record for. You cannot just take an issue for the campaign.”

Ejercito said he is focusing on the youth while Tañada is for good governance, particularly the Freedom of Information bill which he authored.

The two have also begun going around the country to be familiar with local officials and the grassroots level.

Responding to criticism against early politicking, Ejercito said it is not too early to campaign for 2013.

“Ninety days, we cannot cover the whole country and it’s not only now that I realize that the Philippines is not a small country. It’s not really small …. So if you are really serious, you should have started yesterday.”

‘Opposition vs. admin not the issue’

UNA is seen to possibly emerge as the opposition coalition to President Benigno Aquino III’s Liberal Party (LP). Tañada is a member of the LP.

“What is surprising is the opposition is really nowhere to be found so we are stuck right now with the majority coalition that will be fighting among themselves, if ever.”

Tañada, however, said it may be strategic for UNA to label itself as the dominant minority party to secure the third copy of the election returns.

Holmes advised against defining LP and UNA as administration versus opposition.

He added, “I guess it’s too fluid to say unless there’s an issue against the administration or something quite significant erupts that divides the ranks, those for or against it. At this point, I don’t see that.” – Rappler.com