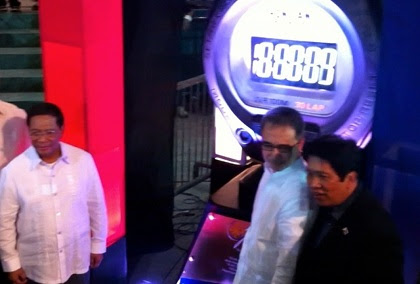 This was the message of the official launch of “Juan Time,” a campaign encouraging the use of the official Philippine Standard Time (PST), and to redefine the notorious “Filipino time,” from one that is lazy and late to one that is prompt, on schedule, and punctual for the benefit of everyone.

The campaign name is a play on the term “one time,” tapping on its aim for all Filipinos to abide by a single, official, and accurate time.

“Time is a resource that is very important but often overlooked… other than its social and economic value, time is something that can unite us Filipinos,” Science and Technology Secretary Mario Montejo said Friday, September 30.

“It is important we put an end to the notion of the old Filipino time. Let us learn how to follow real Filipino time: the Filipino time that urges us to act now for the benefit of our country,” Binay said in his keynote speech during the launch at the SM Mall of Asia  Friday.

“This battle is against ourselves, with our only weapons being self-control, discipline, and a desire of ridding our culture of this harmful habit,” Binay said.

“Let us show the world that the true Filipino time is the one observed by our countrymen” who are always on time, Binay said. “Each of us should start acting on true Filipino time… there is no better time than now,” he added.

During the event — which ironically started minutes later than scheduled, at 6:28 pm rather than the 6 pm stated — watches and other timekeeping devices were synchronized at exactly 7:00 pm Philippine Standard Time.

The PST is based on a timing system consisting of an atomic clock, a Global Positioning System receiver, a time interval counter, a distribution amplifier, and a computer. This system automatically calculates the exact time, 24 hours a day, based on satellite positions.

The Philippine Atmospheric, Geophysical and Astronomical Services Administration (PAGASA) is the official timekeeper of the country, and is the agency handling this timekeeping system at its Astronomical Observatory at the University of the Philippines in Diliman, Quezon City.

People can synchronize their clocks, watches, and other devices with the PST via the PAGASA website, specifically at http://kidlat.pagasa.dost.gov.ph/ourtime.shtml, or by calling (632) 929-1237.

The “Juan Time” campaign is spearheaded by the Department of Science and Technology, and supported by various government agencies and private organizations and companies.