Zambo crisis: The fog of war ZAMBOANGA CITY, Philippines — “What drama is this, Mr President?”

It was the night of Day 5, September 13, and the meeting between President Benigno Aquino III and Zamboanga City local officials and stakeholders was highly charged. Zamboangeños were frustrated that the standoff was taking too long.

“Who is really in control?” asked another.

President Aquino tried to calm them. He stressed that the situation is under control. It’s only 5 out of 98 barangays under siege. They’re not “isolated” just because air travels were cancelled. Land travels were still allowed.

The President’s statement echoed earlier statements by Department of the Interior and Local Government (DILG) Secretary Manuel “Mar” Roxas II that only “a very, very small portion of Zamboanga” is affected by conflict.

One frustrated councilor felt the ground commanders downplayed the situation to the President, who arrived in the city that day.

Officials from Manila observing the meeting felt the Zamboangeños were very disrespectful of the President.

The very tense meeting on Day 5 gives a glimpse of how the crisis was managed and the challenges they faced. There was no clear leader before the President arrived. The Zamboangeños were also very suspicious of the national government. Councilor Rogelio Velasco Jr could not understand how it could happen to Zamboanga City.

“The very ironic question is: How come these things happen in Zamboanga? We have the Western Mindanao Command (Wesmincom). We have the regional police command. We have the naval and the air base. These are the questions the people of Zamboanga are asking our authorities,” he told Rappler on Day 6 of the crisis.

Even the US military has a facility inside the Wesmincom.

Ironically, Mayor Maria Isabelle “Beng” Climaco-Salazar is married to the chief of the National Intelligence Coordinating Agency (NICA), retired Major Gen Trifonio Salazar. But the agency has been dismissed as a mere coordinator of intelligence efforts, largely dependent on field work by the police and the military.

Not a few Zamboangeños wanted swift military action to end the crisis. “That’s the only option, maybe. It is also the clamor of the people of Zamboanga,” said Zamboanga City Rep Lilia Nuño a day after the meeting.

“If it will still drag on, the scenario will be worse. There might be looting because people are already hungry. This is the thing that we are preventing,” Nuño told Rappler then.

When a full-blown military assault was discussed during the Friday night meeting, the President asked, “Do you understand what you are talking about? Can you attend the funeral of 300?” 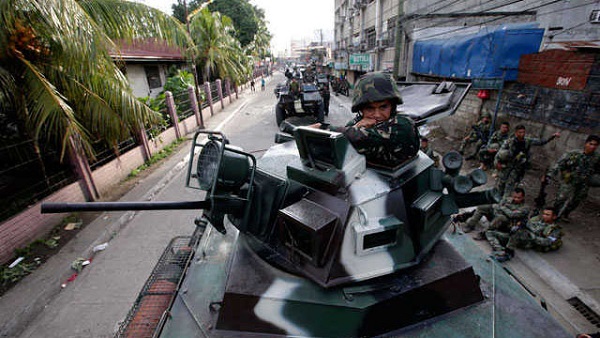 The military started advancing against the Moro National Liberation Front (MNLF) fighters a few hours before the Friday night meeting — shifting its approach from “containment” to “calibrated response.” The following day, Saturday morning, was when the military used for the first time heavy-powered firearms.

“The way I see it, it’s already an assault,” Nuño told Rappler. Two days later, on Day 8 of the crisis, Alert Level 4 was raised, meaning the situation demanded the President’s attention.

Salazar also announced she wanted it over that day, September 14, Day 6 of the crisis.

It’s a unique war — an urban warfare — with a very different terrain. It’s a densely populated residential neighborhood. Aside from taking the residents as hostages, the MNLF used the houses as hiding places.

The standoff dragged until the 20th day because, according to the military, the President’s instruction was to make sure all the hostages were safe.

Even as the military eventually launched air strikes, the President’s instructions meant they couldn’t use the full arsenal of the military to quash the MNLF.

In the end, 195 hostages were rescued. Two were killed and 7 were wounded. “By any standards, I think that is a good accomplishment on the part of the military,” said Armed Forces chief Gen Emmanuel Bautista.

Looking back, Salazar said it was “God’s perfect timing” that a full-blown military assault did not happen.

Salazar pursued negotiations with the MNLF. She even spoke with MNLF founder Nur Misuari and Commander Habier Malik on the phone.

“Yes. Negotiations took place. Negotiations were exhausted to the best we can. At the end of the day, what they sought was the return and full implementation of the final peace accord. It is not within my level as city mayor,” Salazar told Rappler in an interview.

There was an opportunity to peacefully end the crisis during the early stages of the standoff. Malik offered to release all hostages on condition they would be given a “safe conduct pass” so they could return to the negotiating table.

Malik wanted to repeat what happened 12 years ago when the MNLF pulled the same stunt in Zamboanga City’s barangay’s Cabatangan. The city allowed the MNLF a “safe conduct pass” and they were forced to literally watch the rebels walk away — on live TV — in exchange for the safety of the hostages.

The 2001 standoff ended overnight. But it split the city residents then because critics felt allowing the MNLF members to walk away will only encourage them to do it again.

On September 9, the rebels were back. Zamboangeños expected the two-month mayor to make sure the rebels wouldn’t repeat Cabatangan.

Salazar often cried in press briefings in the early days of the crisis. But as easily as tears welled up in her eyes, she would quickly straighten up to show her firm resolve that Malik and his men should be punished.

Salazar made this clear to the generals. This was her non-negotiable and she would repeat her message over and over. 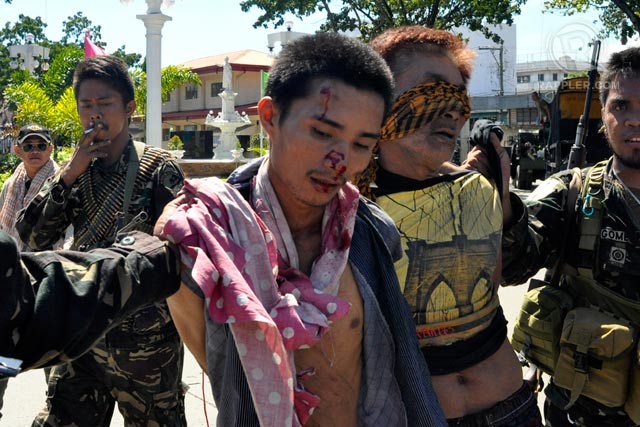 Among those who offered to help in the negotiation as early as Day 1 is the Sulu-based Bantay Bayanihan, the military’s own multi-sectoral program to combat insurgency and rebellion.

“Not wanting a Cabatangan was a constant mantra. Yet the lives of civilian hostages figured much in the dilemma,” said Rebollos. It would have diminished destruction to life and property, and limited the number of internally displaced persons, she said.

READ: Habier Malik: Trapped in the city he seized

Hostaged Catholic priest Fr Michael Ufana also pushed for the Cabatangan solution. It’s the only way to make sure the hostages are safe, he said.

What government can do to seek justice is hunt down Malik and his men when they have left Zamboanga City, the priest argued.

But Salazar stuck to her guns. “People who are not from Zamboanga can only empathize to a certain degree,” she said.

The issue is also deeper than Cabatangan.

Zamboangeños see both 2001 Cabatangan siege and the September 9 attack against the backdrop of the 1976 Tripoli Agreement signed by the Marcos government with the MNLF, which aims to include Zamboanga City among 13 provinces to form the autonomous region. The city repeatedly voted against it in plebiscites.

MNLF hoisting their flag at the City Hall was simply unacceptable.

Rebollos also slammed the “refusal” of their military partners to entertain their efforts during the crisis.

“Amidst the burning of houses, our interlocutors were in no mood to meet us, and even exhorted us to ‘forget Bantay Bayanihan,’” Rebollos said.

“When push comes to shove, the military will exercise what it does best — fire the gun ostensibly under the orders of the commander-in-chief,” she added.

Salazar, for her part, highlighted the role that should have been played by the Office of the Presidential Adviser on the Peace Process (OPAPP).

It’s the biggest lesson of the crisis, she said. “We have to listen to the diverse voices in Mindanao to dialogue and empathize because it will mean so much in the greater development of her and his story of the children of Mindanao. It pays to listen. If we did not listen, we pay big and pay big time,” she added.

Malik’s former hostage, former Marine Gen Benjamin Dolorfino, also talked about the OPAPP’s shortcomings in communicating this. He talked about a conversation with OPAPP officials when he warned about a “possible violent repercussion” if it is not explained well.

“He (OPAPP official) told me the government considers the MNLF a spent force. See what happened?” Dolorfino said.

“The MNLF has so much expectation out of the Tripartite Review.  By denying them this venue, they have no other recourse but look for other means to ventilate their position,” Dolorfino said.

“I hate to say this but perhaps Chairman Misuari is already an old man and perhaps he would like to end something with him there in the picture, which is definitely wrong because causing all these is wrong,” Lorena said.

As the standoff dragged, Zamboangeños entertained ideas of a staged war.

Salazar explained: “This encroachment of fear — misinformation of text messages and of sightings — are what causes these rumblings in the heart. It makes the pain, anger and frustration that we would have wanted to go back to normalcy.”

There was talk about the 2016 presidential elections, especially because the crisis involved presumed presidential candidates DILG Secretary Roxas and at one point Vice President Jejomar Binay.

Speculations abounded when Zamboanga City police chief Senior Supt Chiquito Malayo was taken hostage by the MNLF but was able to turn around the situation and instead make 23 MNLF fighters surrender.

At least one local radio station commentator lengthily talked about a supposed “game of the generals.” It was not uncommon to hear residents — rich and poor — echo the speculations. 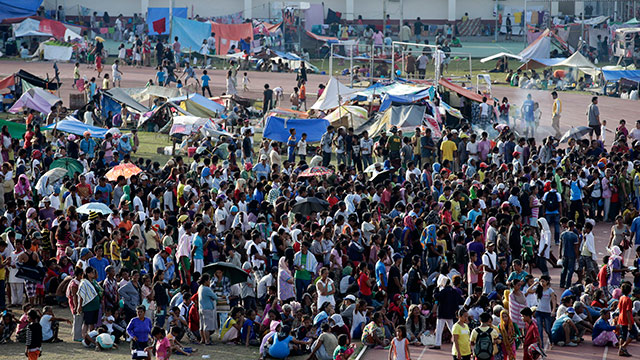 Social media didn’t help. The picture of a Muslim youth leader circulated in the social media and he was accused of organizing young people to reinforce Malik and his men. He eventually faced the media to correct the misconception.

What is being whispered about in Zamboaga City eventually reached Manila. Sen Miriam Santiago accused her political enemy Sen Juan Ponce Enrile, currently embroiled in the alleged pork barrel scam, of financing the MNLF attack. It’s supposed to divert national attention from the pork scam to the Zamboanga crisis.

On September 28, the crisis was declared over although there were still sporadic firefights between government forces and “remnant” MNLF fighters hiding in houses.

Military statistics show among those killed were 183 MNLF fighters, 18 soldiers, 5 cops, and 12 civilians. A total of 195 hostages were rescued and 292 MNLF fighters either surrendered or were captured.

Over 10,000 houses were damaged by fires and over 100,000 Zamboangeños are staying in evacuation centers and will stay there for months until the city government has rehabilitated the combat zone. 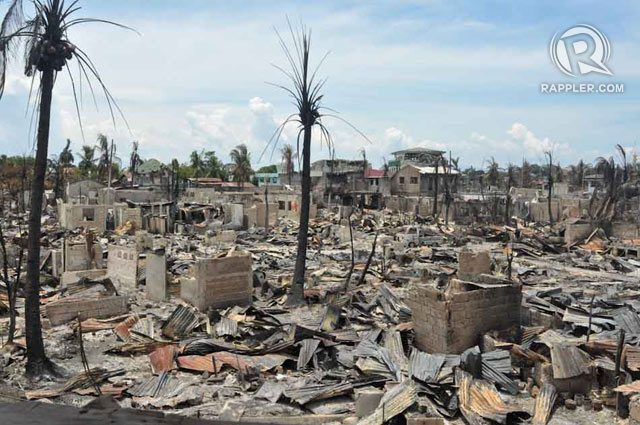 Aquino is confident the MNLF has been diminished and could not launch another attack against Zamboanga City. Cases have been filed against the MNLF fighters in custody and MNLF’s Misuari.

Malik could not be found, however. Government troops are determining if he is among the dead bodies recovered. It’s not an easy process, supposedly, because some cadavers are in advance stages of decay. Either that, or he has escaped.

But there are questions still waiting to be answered. There are residents in the combat zone who ask: Why do fires break out when the crisis is already over?

The Zamboanga City Council has also sought a congressional probe to explain what happened in the city.

Salazar said there will be explanations and the city will heal. She also laments hostages blaming her for “abandoning” them.

“We empathize with the people. There will be a greater processing that will take place. And that begins with me,” Salazar added.

The war is over but the fog remains. – Rappler.com