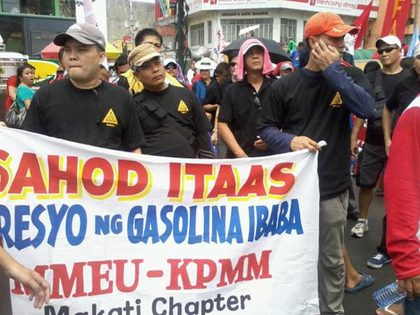 MANILA, Philippines – The Philippine average monthly wage of $279 (roughly Php 11,700) is 19% of the world’s average as calculated by the International Labor Organization (ILO). The calculation placed the country at the bottom 3 of the 72 listed countries, just above Pakistan and Tajikistan.

The world’s poorest countries were not included in the study. In contrast, the highest average monthly wage is Luxembourg’s with $4,089.

The ILO presented a world average monthly wage of $1,480 based on statistics per country.

National averages were multiplied by the size of the workforce per nation. In addition, the statistics includes only the wage earners from each country and not the self-employed.

According to statistics collected by the think tank IBON Foundation in 2011, NCR’s minimum wage only covers 43% of the family living wage (FLW) of P993. The FLW is the average daily cost of providing for a family in a given region and is based on the NCR commodity price index since September 2008, inflated for 2011.

IBON Foundation also noted that the gap between minimum wage and FLW has widened since 2001, which saw a P265 minimum wage that was 52% of the P509 FLW.

Filipinos and the global average

Users input their country and monthly salaries in their local currency and this is compared to the global statistics.

Rappler interviewed some members of the service sector to compare their salaries with the published averages. LBC Sales Associate Mylyn Don, for example, earns P10,500 a month, which is 139% of the national average and 26% of the global average.

Try out BBC’s application and see where you are on the global pay scale. – Rappler.com